No mobile or internet sports betting would be allowed 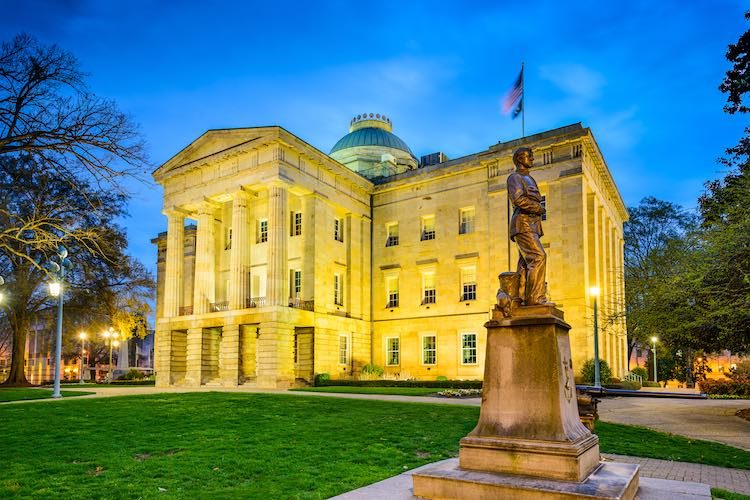 It may be the dog days of summer when it comes to sports betting, but don’t tell lawmakers in North Carolina. Legislators in the Tar Heel State on Monday passed a bill with no discussion that will legalize sports betting at two tribal casinos. SB 154 overwhelmingly passed a first reading in the House of Representatives, 91-26, and then immediately passed a third reading via voice vote.

The bill will now be sent to Governor Roy Cooper for his approval. Cooper has 30 days to sign it from when he receives it. Should he ink it, North Carolina will become the seventh state this year to legalize sports betting — albeit very limited in its reach and form, with no mobile sports betting component. New Hampshire legalized last Friday, when Governor Chris Sununu signed a bill that will allow state-wide mobile and retail sports betting.

The bill “does not geographically expand gaming in North Carolina,” said Representative Kevin Corbin when he introduced the bill Monday. “We’re not asking to legalize gaming, that was done 21 years ago. We’re not asking for internet or remote sports betting.” This will take place at existing tribal casinos, he said.

Hmmmmmmmmm how many serious sports bettors in NC will now make weekend trips to the NC Casinos in Western NC (Cherokee and Murphy) to place bets on college and pro football games ? ? https://t.co/bxPHDFL5bR

According to the text of the bill, it will be legal to bet on professional and collegiate sports, including those in North Carolina. In several states, including Illinois, lawmakers have chosen to “carve out” local collegiate teams when legalizing.

Last week, a representative proposed an amendment that would have prohibited betting on local colleges, but North Carolina is home to many big-time college sports teams, including perennial men’s NCAA college basketball powerhouses Duke and North Carolina, which have won a combined 11 NCAA titles and played in 22 title games. The amendment was ultimately withdrawn.

It remains to be seen how the two sportsbook will be branded and constructed, especially in light of the late June announcement that Eldorado Resorts Inc. had purchased Caesars, creating a partnership ripple effect. It’s possible that the sportsbooks could be branded and operated by William Hill  US (which has a deal with Eldorados) or Caesars or DraftKings (an agreement with Caesars).

While SB 154 represents a start for legal NC sports betting, it’s a muted beginning, given the lack of mobile sports betting and the substantial distance of both properties from the state’s major population centers in Charlotte, Raleigh, Greensboro, Winston-Salem, Durham and others. Charlotte is about a three-hour drive from Harrah’s Cherokee.

In addition to legalizing at the two tribal casinos, North Carolina lawmakers appear to be considering a bigger expansion into commercial casinos. Also working its way through the House is a bill that would evaluate the feasibility of sports betting throughout the state and create a the North Carolina Gaming Commission. SB 574 could get to a vote as early as Tuesday.