TheScore Bet and bet365 are the most downloaded apps in Ontario

Fact: No team has ever come back from an 0-3 deficit in the NBA playoffs.

And this is exactly the situation the Toronto Raptors find themselves in after Joel Embiid ripped out their hearts in Game 3 with a game-winning 3-pointer in overtime to put the Sixers in cruise control in the best-of-seven playoff series.

Start your day with Joel Embiid and Titanic music🔊pic.twitter.com/tzYIv0ZTJI

The good news, though, is that the Raptors have a couple days to regroup, heal up, and lay it all out at home again Saturday in Game 4.

Scottie Barnes (ankle) will likely be back for Game 4, according to head coach Nick Nurse. He’s been sorely missed, especially on the defensive end, since sustaining the injury in the series opener.

Although the 0-3 comeback has never been done before, Canadians will still be watching with hopeful optimism as the Raptors try to get back into the series and prolong their season.

The battle for Ontario

It’s only been a few weeks since the launch of Ontario’s regulated iGaming and sports betting market, and there’s now some data available to gauge how operators are faring in the market. Morgan Stanley, an American multinational investment bank, has been collecting data since the April 4 launch and released some interesting numbers through April 19 via email.

(Of course, these are the earliest of early days for the industry in Ontario.) https://t.co/bVJGJIUCgV pic.twitter.com/ELoE8670S9

It’s not surprising theScore, which is based in Toronto and has significant brand recognition in the region, is popular with Ontarians. The company’s successful sports news app has roughly 4.5 million monthly users, and many of those users are likely also downloading theScore Bet. The two apps are now harmonized, making it easy for users of the sports news app to quickly tap and place a bet if they also have theScore Bet downloaded. TheScore Bet does not have a desktop version of its platform, so all user engagement will be through the app.

The report notes bet365’s revenue share may be even higher as the previously gray operator had an estimated 35% of the sports betting market prior to the April 4 launch, and then transitioned many of those customers to its Canada app.

A communications person from FanDuel told Sports Handle on Thursday they took the historic step of launching into the market with purely responsible gaming advertising.

“Nowhere in the world has this ever been attempted and we’re very proud to have delivered a safer gaming message during a key moment of acquisition and still rank among the top three operators in the market,” she said.

Early GeoComply Ontario data mentioned in the report suggests the market is tracking toward $1.1B GGR in 2022, and location checks are ranking fifth behind the U.S. states of New York, Pennsylvania, New Jersey, and Michigan.

Sports Handle has also obtained a report on early Ontario market projections as of April 19 from Barclays Capital. The company’s Canadian app data shows that theScore had a 24% share of downloads in the first 10 days since Ontario launched legal online gambling, with bet365 at 24%, FanDuel 20%, and BetMGM 11%. It also notes that DraftKings has not yet launched in the market and is expected to be popular with Ontarians.

The report also includes data on time spent in the various available apps. Barclays Capital found bet365 and Betway, another previously gray operator in Ontario that should be licensed in the province shortly, leading the pack. 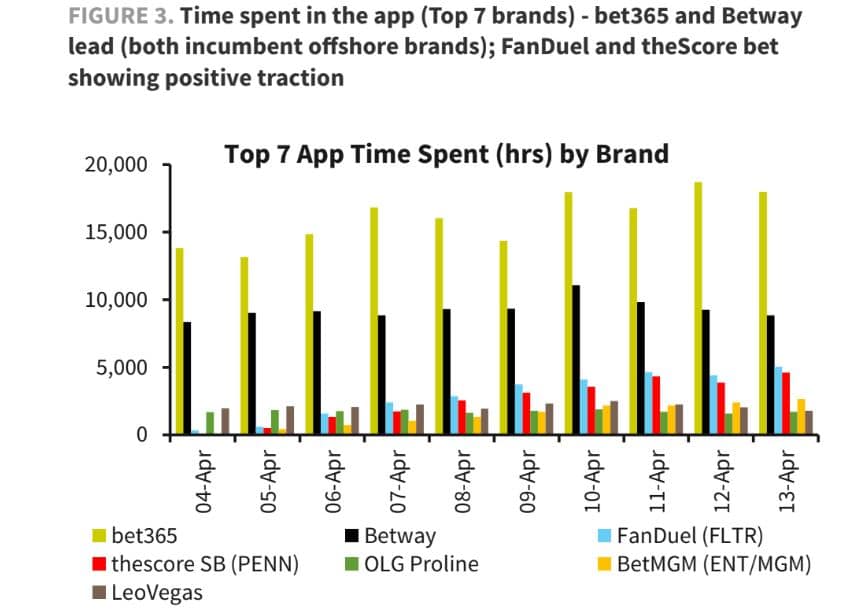 It could be some time before actual Ontario market revenue numbers are disclosed. Sports Handle recently asked iGaming Ontario about when and how data would be released, but was told its plan for revenue reporting would be communicated at a later time.

It’s also important to note that just because users are downloading these apps doesn’t necessarily mean they’re actually signing up for accounts and depositing large amounts of cash for wagering purposes. It’ll be interesting to see the conversion data as it becomes available.

Another group of operators is expected to be fully licensed in Ontario by April 25 and could go live in the province shortly, according to an industry source.

This week, NorthStar Gaming and Betway received approved licenses from the Alcohol and Gaming Commission of Ontario, and can potentially go live as soon as they both secure operating agreements with iGO.

NorthStar Bets, which has an integrated content partnership with TorStar Corp., launched its social media accounts this week and is now taking pre-registrations, suggesting a launch is imminent. TorStar Corp. is a Canadian mass media company that owns the Toronto Star and many other newspapers across Ontario.

Guess what? A premium gaming experience is coming soon to Ontario.

According to the aforementioned Morgan Stanley report, Betway accounted for the highest percentage of iGaming and sports betting smartphone app downloads in Ontario on a month-by-month basis in 2021.

DAZN, an international streaming platform 100% dedicated to sports, is partnering with Pragmatic Group, a platform technology and content provider for the gaming industry, to help launch the betting platform.

“The convergence of sports media and betting is the future. This historic partnership brings together the leading sports media company and a technology partner who is committed to developing innovative experiences for fans. It underscores DAZN’s commitment to revitalize the sports viewing experience by offering a broader spectrum of digital entertainment for fans,” said DAZN Group CEO Shay Segev in a press release.

Segev is the former CEO of Entain, the company that owns the BetMGM, bwin, party, and Ladbrokes betting brands.

Some reports are indicating the brand could be live in Ontario by the end of this year’s third quarter.