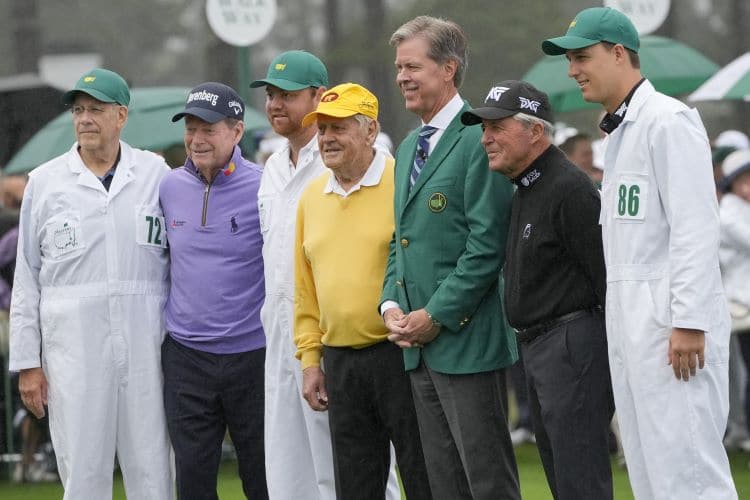 Golf legends Tom Watson, Gary Player, and Jack Nicklaus were up at the crack of dawn Thursday in Augusta, Georgia, for the ceremonial tee-off to open The Masters.

Tiger Woods is grabbing all the headlines as he makes his triumphant return to golf’s grandest stage, just 14 months after surviving a rollover car crash in February 2021. Betting tickets are pouring in all across North America on Woods, who is seeking his sixth green jacket. Tiger accounts for 11% of the outright tickets at BetMGM and 14% of the handle, and is also a popular bet north of the border to win the event.

“Tiger is obviously massively popular,” a spokesperson for PROLINE + told Sports Handle. “The odds on him to win started at +6000 and have steadily come down as he practiced and spoke confidently of his chances.”

Around 8% of the tickets and 13% of the handle are on Woods at PROLINE + in Ontario, while Canadian Corey Conners is a distant second at 5.4% of the tickets. Surprisingly, one of of PROLINE +’s biggest liabilities heading into the event was 2003 Masters champion, and Canadian, Mike Weir.

“A Canadian favorite, Weir’s odds opened at +75000, but have come down a bit since Mike’s tie for the win in the fun Par-3 contest,” the PROLINE + spokesperson added. “Another popular special bet with our players is ‘Will Tiger Woods Finish in the Top 10’, and we’re paying +330 if he does.”

up to $100 Instant Deposit Match

ONE day until the 86th Masters Tournament. Who do you like to win it all? ⛳ 🏆 pic.twitter.com/VBxyWIwEtq

Ontario up and running

Ontario’s regulated iGaming and online sports betting market launched shortly after midnight on April 4, and bets are now pouring in across the province.

As expected, Bet365, which already had an estimated 35% of the sports betting share of the market as a gray operator heading into the launch, still appears to be the preferred sportsbook of consumers in Ontario.

Congratulations to all of our partners in Ontario who participated in the new #iGaming market launch yesterday!

As you can see, the majority of bets were placed in southern Ontario, which is home to roughly 94% of the province’s total population of around 15 million. There also appeared to be many geolocation fails from the nearby province of Quebec in the Montreal area, which borders Ontario to the north and east. Sports Handle previously spoke with GeoComply’s Managing Director of Gaming Lindsay Slader, who accurately predicted Quebec consumers would attempt to access the Ontario market once it went live.

“Montreal is within very close reach (roughly 19 miles) of betting on an Ontario site. What kind of risk does that pose? When you’re thinking about how you pinpoint someone’s location, if you’re not looking at accurate location data like Wi-Fi or GPS, you’re just counting on an IP address,” Slader said. “An IP address can easily cover 50 kilometers (31 miles) or more, it can easily stretch you from Montreal into Ontario, even if you may not even actually be in Ontario. There’s definitely risks to the different types, or calibers of different types, of geolocation you’ll be using.”

Rivalry, which is offering sports betting, esports, and online casino in Ontario, was one of the first operators to get an iGaming license in the province, and is taking its marketing to another level with some custom art on the fleet of the Toronto Transit Commission. Steven Salz, CEO of Rivalry, shared some of the images on social media Tuesday.

If you spot this in Toronto, please share pics! Credit to our creative team for an incredible job on the wrap. Continuing the hype around our launch in ON 🇨🇦 https://t.co/uh86GDwNtm $RVLY pic.twitter.com/OLt0asUdAf

The deal gives theScore Bet, a subsidiary of Penn National Gaming, exclusive marketing rights for its sports betting, casino, online casino, and fantasy sports offerings. There are also plans for a branded sports bar and restaurant at Rogers Centre, home of the Blue Jays.

“TheScore Bet is proudly Canadian and we are thrilled to make Canada’s baseball team our long-term partner,” said John Levy, CEO of theScore Bet, in a press release. “This is a foundational partnership with a team and organization that is deeply embedded in our country’s sports culture. Teaming with the Blue Jays opens up exciting new exclusive marketing opportunities and brings theScore Bet even closer to a huge audience of passionate and engaged fans, both on-site at Rogers Centre and online across our platforms.”

The partnership will also include two sponsored premium seating sections on the baselines, extensive in-stadium branding, in-game features, and a host of team-related experiences — and designates theScore Bet as the presenting partner of the Jays Care 50/50 draw program.

Still some kinks to work out

As expected, Ontario’s launch wasn’t exactly smooth for all operators and consumers.

There’s a lot of negative feedback on Twitter regarding Bet365’s relaunch, in particular. Some of the issues users are complaining about include lengthy customer service queues, frozen accounts and balances as a result of the transition from a gray to white sportsbook on April 4, and location verification.

@bet365 this new Ontario betting is screwing up everything. The non existence of customer service makes it even worse. Bet365 was not prepared for this at all!

Anyone else still not have their money from @bet365 since their Ontario gambling change on monday? Absolute joke of a customer service experience too, at least @theScoreBet does it right

There’s also a backlog at the Alcohol and Gaming Commission of Ontario and iGaming Ontario, as operators try to get their licenses pushed through. Ontario is still awaiting the arrival of DraftKings, while many other sportsbooks, including Pinnacle and BetRegal, are still in the licensing process.

Where is $DKNG, Betway etc? Likely just got their paperwork in late and Ontario regulators are rushed off their feet, as Sportradar CEO Carsten Koerl said last week pic.twitter.com/gCkzunUoPA

It’s not all bad news circulating about the launch, though. There’s been lots of positive feedback regarding how easy the deposit and payment methods have been for Ontario users.

Approval rates appear to be quick and seamless, while Interac deposits were also straightforward and easy, as I found out firsthand while signing up at a few sportsbooks. FanDuel, in particular, is marketing its fast payouts to seduce Ontarians into signing up.

Over at @FDSportsbook, you can expect FAST PAYOUTS!

Get paid in as little as 2 hours 🤑

FanDuel and the NHL also announced in an email press release Thursday a new multiyear partnership deal, making FanDuel one of the first-ever North American sports betting partners of the NHL, as FanDuel expands its rights into Canada. FanDuel will have rights to use official NHL branding and category designations in a variety of ways to appeal to fans and sports betting customers in legal jurisdictions across Canada and the United States.

Ontarians on social media also seem pleased that they now have 17 new iGaming sites to choose from and are no longer limited to wagering with just PROLINE + in the province.

Coolbet teams up with Canadian sprinter

“Andre De Grasse is the perfect ambassador for Coolbet,” stated Kris Abbott, Head of North America for Coolbet. “Whether he’s settling into the starting blocks in an Olympic final, walking the red carpet, or chasing after his kids, Andre consistently personifies what it is to Stay Cool. As a recently approved licensee here in Ontario, we are excited to build on the internationally recognized Coolbet brand. We know that Ontarians will enjoy our award-winning user experience and we’re thrilled to be partnering with Andre to engage and inspire our customers.”

Coolbet launched in Ontario on April 4 as a regulated sportsbook and claims to be the most transparent gaming company in the industry. The operator was commended for how it recently handled settling bets with existing customers as it transitioned from a gray-to-white sportsbook.

“Working with partners that align with my brand is important to me and Coolbet is a perfect fit. We both stand for innovation, fun, and excellence,” said De Grasse in the release. “We are passionate about sports and sharing the excitement of the big game. The opportunity to promote responsible betting in a fun but meaningful way was also important in my decision to work with Coolbet. And, of course, I love the cool polar bear logo.”