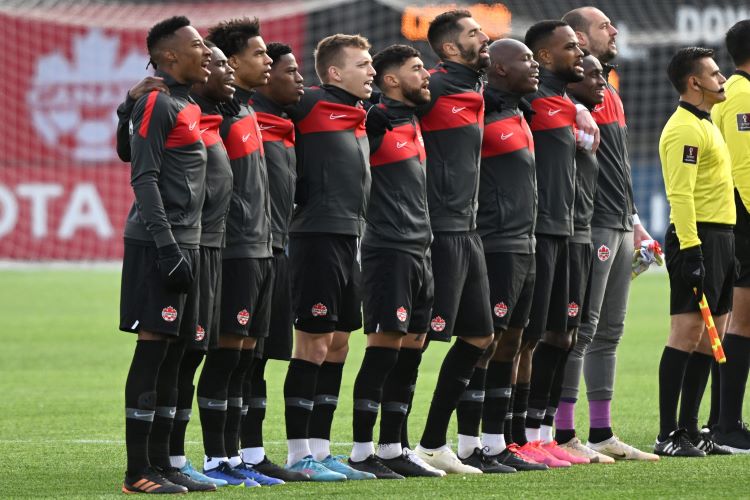 One of the most significant matches in men’s Canadian soccer history will be played Thursday night, as Canada attempts to qualify for the World Cup for the first time in 36 years when it takes on Costa Rica in San Jose.

There are a number of paths Canada can take to clinch a spot in Qatar 2022, but the most straightforward way is with a win. Canada, which leads the table with 25 points (seven wins, four draws) through 11 qualifying matches, can also clinch in a number of different scenarios should it draw or lose to Costa Rica, depending on how the other matches play out Thursday.

In a previous matchup with Costa Rica during qualifying in November, Jonathan David scored the lone goal on a chilly night in Edmonton, Alberta, to give Canada a 1-0 victory. The undefeated Canadians will be without star Alphonso Davies, who has not played since early January because of myocarditis symptoms following a bout of COVID-19.

Alphonso Davies, of course, won't be playing for Canada this window, but John Herdman says Canada Soccer are working with Bayern to potentially have Davies join the group to 'have him in and around the environment.'

According to the Canadian Gaming Association, Google has tweaked its Canadian policy to allow provincially licensed operators for sports betting, online casinos, and daily fantasy sports in Ontario to advertise on its platforms.

Once operators register with the Alcohol and Gaming Commission of Ontario and iGaming Ontario, they can apply for a Google certificate. The advantages of operators being able to advertise with Google are obvious, and it’s notable that any gray market operators in the provinces won’t be able to apply for these certificates.

Google has adjusted its Canadian policies to allow provincially-licensed entities to advertise on Google platforms. Link to new policy, inc. info for advertisers to apply for a certificate. They must be licensed by the ON regulator to get a certificate. https://t.co/BxGEa0euX2

Ontario bettors who have accounts with gray market operators that are converting to the regulated market on or around April 4 can expect some changes.

Operators like Bet365, which just converted from a gray market operator to a regulated sportsbook in Ontario, will have to settle any wagers that their Ontario customers had previously made with them before they can start taking wagers in the new regulated market, according to the FAQ section for operators listed on the iGaming Ontario website.

For example, if a hypothetical bettor had placed a wager on the Toronto Maple Leafs to win the Stanley Cup this year, that bet will now be void and the initial wager should be returned to the customer, as the Stanley Cup won’t be awarded until well after April 4.

Unibet and Coolbet are two more examples of operators that were previously considered gray market sportsbooks in Ontario before recently becoming fully registered with the AGCO.

Kambi Group received AGCO approval Monday to be a gaming-related supplier in Ontario as of April 4. The company provides a software platform with front-end user interface, odds compiling, customer intelligence, and risk management. Some of its current clients planning to launch in Ontario include Unibet, Rush Street Interactive (BetRivers), NorthStar Bets, and LeoVegas.

Kambi takes another step closer to launching in Canada having obtained regulatory approval to launch our leading sportsbook with partners on day one of the online market opening.

You can read the full press release here: https://t.co/CKb3yMFpuY#weknowwhatittakes pic.twitter.com/IHaEIZjuSY

As of Thursday afternoon, 16 private operators had been issued iGaming licenses with the AGCO:

Sports Handle has learned Pinnacle and BetRegal have submitted applications for an Ontario license, but neither is certain to get full approval from the AGCO and iGaming Ontario by April 4. Both operators are licensed with the Malta Gaming Authority and are operating as gray books in Ontario.

BetRegal, a Canadian company that first launched in Europe, is the official sport partner gaming partner of the Canadian Football League. Roughly 30 private operators could be granted licenses by, or shortly after, April 4.

The excitement for the debut of the regulated market in Ontario is reaching a boiling point, and that means many operators are beginning to plan their respective launch parties.

PointsBet Canada will host its launch party at legendary Toronto music venue El Mocambo on April 9. The cast of Trailer Park Boys will be on hand as official PointsBet brand ambassadors, as well as a few special guests. A few former NHL players might also be on the VIP list, as the NHL Alumni Association is one of PointsBet’s strategic partners.

Toronto-based theScore Bet is hosting an official ”Home Opener” launch party for fans aged 19 and over in Toronto on April 2, 3, and 4 at 229 Richmond St. W. More details will be available soon. TheScore Bet is now available for download on iOS devices and is accepting pre-registration for patrons who want to wager in Ontario. The sportsbook also debuted its “GET INTO BET MODE” advertising campaign, featuring comedian Susie Essman, actor Rex Lee, and Toronto’s own Gerry Dee.

Ontario, are you ready? We've got you covered.

It's time to GET INTO BET MODE. 🇨🇦 https://t.co/N8ThGLSHfs

And if two parties during launch week isn’t enough for you, the Canadian Gaming Summit is also hosting a reception for industry stakeholders on April 4.

Respected broadcaster Rod Black is the official brand ambassador for NorthStar Bets, the company announced in a press release Thursday.

NorthStar is based in Toronto and launched as an online betting brand in March 2021 after partnering with Torstar Corp., a mass media company that owns Canada’s largest print newspaper, the Toronto Star.