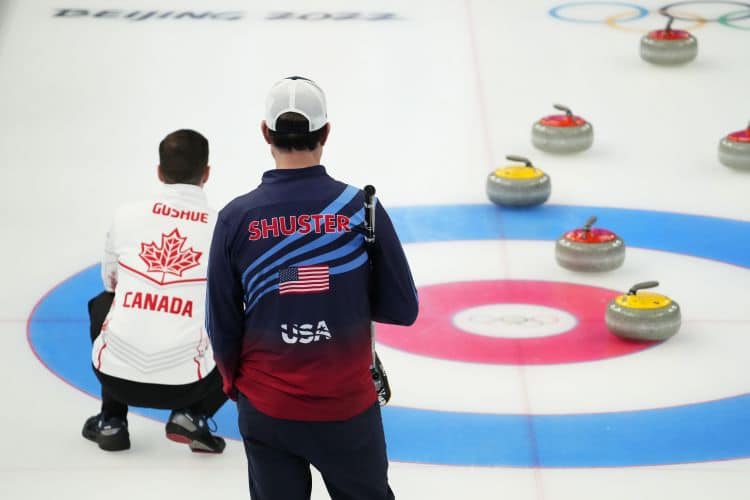 Canada entered as the favorite to claim gold medals in each of the Olympic curling disciplines — men’s, women’s, and mixed — and now the curling-obsessed nation will be lucky to claim a single medal in Beijing. These Games have simply been a disaster for Canada’s curling teams. Rachel Homan and John Morris failed to reach the semifinals of the mixed competition after falling 8-7 in extra ends to Italy, while Jennifer Jones and her women’s team couldn’t advance past the round robin stage.

Brad Gushue and his team played Team Sweden in a men’s semifinal match Thursday but failed to score a difficult pair on the last rock of the 10th end to advance to the gold medal match. Now, Gushue and Co. will square off with the defending Olympic champions from the United States at 1 a.m. ET Friday for the bronze medal.

During round robin play last Sunday, Gushue stole four critical points in the second end to power Canada to a 10-5 victory over John Shuster and the U.S., which fell 8-4 to Great Britain in the semifinals. It was the first time since the 2006 Turin Olympics the two foes have squared off in Olympic play

If Gushue, the gold medalist in 2006, fails to win, Canada’s curling teams will will leave the Olympics without a curling medal for the first time since the sport’s 1998 reinclusion.

PointsBet Canada continues to be aggressive in its pursuit of becoming a key player in the Canadian sports betting market. The sportsbook is targeting Alberta, and specifically the Calgary-Edmonton area, as a possible expansion point for its Canadian operations.

“Our mission since the very beginning has been to build a Canadian sportsbook, with Canadian employees, for the Canadian market. We believe that Alberta has the talent and highly skilled workforce that can help us be at the forefront of iGaming in Canada. In addition to the economic growth created by an iGaming workforce, Alberta has an even greater economic opportunity should it choose to pursue a regulated and competitive iGaming market in the province. Doing so would create a level playing field in a responsible and licensed gaming market for Alberta’s sports fans,” said CEO of PointsBet Canada Scott Vanderwel in Invest Alberta’s release.

Alberta regulators are accepting two bids from private operators to operate in the province. The request for proposals process closed at the end of January, and the two winning bids should be announced soon. This announcement from Invest Alberta certainly suggests PointsBet was one of the many private operators to submit a bid.

Research conducted in 2020 concluded that Albertans spend over $100 million (CAD) annually on offshore sports gambling websites and daily fantasy sports options, such as DraftKings and FanDuel. Alberta has a population of roughly 4.5 million people, making it the fourth-most populous province in Canada.

PointsBet Canada was one of the first private operators to announce it had obtained a license to participate in Ontario‘s regulated iGaming market, which is set to launch on April 4. The company has been busy inking several strategic Canadian partnerships, including deals with the NHL Alumni Association, Alpine Canada, Curling Canada, and the Trailer Park Boys.

The Mohawk Council of Kahnawake (MCK) and the Six Nations of the Grand River (SNGR) — both located in the Great Lakes region of Ontario — have entered into an agreement of mutual cooperation on gaming, they jointly announced Tuesday.

The basis of the agreement is to defend indigenous control over gaming in Ontario and maintain the socio-economic benefits of first nations communities.

“Today’s agreement signifies an important milestone as our communities come together to address our collective concerns. This type of partnership is the first step in demonstrating the possibilities of what we can achieve as Iroquois communities if we work together. We are much stronger not as individuals, but as a collective, and these relationships will strengthen us as we assert our rights and jurisdiction within the gaming industry and beyond,” said SNGR Chief Mark Hill in the release.

The agreement comes after Sports Interaction, which is operated by Mohawk Online and licensed by the Kahnawake Gaming Commission, announced it wouldn’t be applying for an Ontario iGaming license and would continue to operate using its tribal rights. Various tribes have expressed their frustration with the Ontario government for not consulting them about the upcoming changes to the gaming industry and the impact it will have on their communities.

The British Columbia Lottery Corporation began piloting sports betting concepts in the province last week at over a dozen bars and pubs, as well as one casino. These are the first locations to introduce the PlayNow.com sportsbook after single-event sports betting was legalized last August.

“This marks the first step in testing how PlayNow.com, B.C.’s local sportsbook, can be implemented at land-based locations,” said Dan Beebe, BCLC interim chief operating officer, in a release. “This pilot will help BCLC to understand the preferences of sports bettors, and help inform future experiences and programs to help support safe, positive play.”

The Rogers Arena Sportsbar, which is located inside the venue where the Vancouver Canucks (NHL)  and Vancouver Warriors (NLL) play their home games, is one of the participating locations.

Currently, PlayNow is the only online legal sports betting option in the province. There are no known plans to create an open market, like in Alberta and Ontario.