Toronto Blue Jays kick off second half at Fenway Park

It’s been a roller coaster season to this point for Canada’s only Major League Baseball team, the Toronto Blue Jays.

After opening the season with the second-best World Series futures odds (around +800), a mediocre 15-13 June and a disappointing 7-10 July have the Jays currently out of a wild card spot in the American League with a 50-43 overall record.

Toronto’s World Series odds have lengthened to +2500 at FanDuel, with the team +950 to win the AL pennant. The Jays are now +360 to miss the playoffs.

Press 💙 if you love this squad ⭐️ pic.twitter.com/96Bm3DiCsa

Manoah entered the Midsummer Classic in the second inning and struck out three batters. The 24-year-old first-time All-Star allowed himself to be mic’d up for his inning of work, and he went viral on Twitter for his hilarious commentary while dealing on the mound.

Alek Manoah needs to be mic'd up every game he pitches 🤣pic.twitter.com/BoBIEexXnW

Toronto opens the second half of the season Friday at Fenway Park for a three-game set with the Boston Red Sox.

Just weeks after going live in the state of New York, Bally Bet is also now operating in the province of Ontario.

The operator received approval from iGaming Ontario on Wednesday and had previously been licensed by the Alcohol and Gaming Commission of Ontario.

Bally's is officially north of the border! Say hello to Bally Bet #Ontario. Packed with the most thrilling online #slots and #tablegames, there’s something for everyone.

As of Thursday morning, there didn’t appear to be any sportsbook offerings, but its online casino offered slots and table games, including live dealers.

There are now 32 gaming sites live in Ontario and more than 70 could be active by the end of the year, according to provincial regulators.

Just days after losing Johnny Gaudreau to the Columbus Blue Jackets via free agency, the Calgary Flames were dealt another significant blow Wednesday when reports surfaced that forward Matthew Tkachuk had told the team he isn’t interested in re-signing a long-term deal.

The team is now expected to aggressively pursue trade opportunities for the star player, who collected 42 goals and 62 assists in 82 games last season for the Flames.

On July 4, Calgary had +1800 odds at FanDuel to win the Stanley Cup. However, those odds have lengthened to +2100 as a result of losing Gaudreau, who netted 40 goals last year for Calgary, and the Tkachuk trade speculation.

Matthew Tkachuk after telling the Flames he wants to be tradedpic.twitter.com/ypbgXnbsxw

The St. Louis Blues are among the rumored frontrunners to acquire Tkachuck’s services. His dad, Keith, spent nine seasons with the Blues in the early 2000s.

Is Matt Tkachuk on the move?

Here are the current odds for his preferred long-term destinations to win the #StanleyCup:

A customer service representative said the company used one of the slowest sports days of the year to undergo app upgrades and market expansion.

Following the upgrades, it’s apparent that the app is now offering many more prop and special markets to bettors, especially for MLB games.

TheScore Bet ceased its U.S. sports betting operations on July 1 to purely focus on its Canadian product with the ultimate goal of migrating Barstool Sportsbook onto the company’s in-house risk and trading platform.

TheScore Bet is owned by Penn National Gaming and is one of only a few few homegrown operators live in Ontario.

Workers are seeking better wages, benefits, pensions, and more full-time positions as the land-based casino industry in the province desperately tries to rebound from rolling COVID-19 closures over the past couple years.

“Casino employers have bounced back following the pandemic-related closures,” said Lana Payne, Unifor national secretary-treasurer, in a press release. “Our goal at the bargaining table is to share some of those gains with the workers who make casinos successful.”

Great Canadian Gaming has 25 properties across four provinces, but the eight casinos that could be affected are located in Ontario. Some of these casinos are located in the Greater Toronto Area and are among the busiest in the province, including Casino Woodbine, Great Blue Heron Casino, Pickering Casino Resort, and Casino Ajax.

Great Canadian Gaming publicly opposed the recent launch of Ontario’s regulated iGaming and sports betting market by publishing a report that stated Ontario’s government could lose $550 million per annum by shifting to an open market.

Unifor is Canada’s largest union in the private sector, representing 315,000 workers in every major area of the economy.

Casino workers from Unifor Locals 1090, 504 and 252 are at the bargaining table hoping to avoid a strike as early as Friday night at 8 @GRTCanadian casinos.
Decent wages, benefits, and pensions are a must. #canlab @Chrisatunifor https://t.co/KWaJB28KVK pic.twitter.com/EcvYzj5hS9

Ontario’s provincial election was held on June 2, and more than a month later, we’re still waiting for provincial regulators to release revenue numbers relating to the launch of the regulated iGaming and sports betting market.

It’s unclear what the reasons are for the delay, but the numbers are expected to be released quarterly moving forward.

Early app download data suggested bet365, FanDuel, and theScore Bet were the preferred sports betting/iGaming providers used by bettors in the first month of the market. 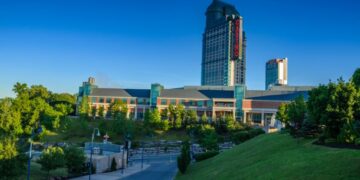