If you like scoring, Game 1 of the Western Conference Finals was like Christmas morning, as the two teams combined to score a whopping 14 goals. Most sportsbooks posted totals around 7 goals for the series opener, and many are inching their totals up slightly higher to 7.5 goals for Game 2 on Thursday night. Edmonton has now played over the total in five of its last six games overall and Colorado in four of its last five contests.

Bettors looking to wager on the Edmonton moneyline in Ontario will find the best odds at Coolbet Canada (+156) as of Thursday morning. BetMGM is reporting relatively even betting volume on Game 2 and heavy action on the over.

Next week, the PGA Tour stops in Canada at St. George’s Golf and Country Club in Etobicoke, Ontario, for the RBC Canadian Open.

The tournament is put on by Golf Canada, which is aligned with theScore Bet as its official gaming partner. The Toronto-based sportsbook, which launched in Ontario on April 4, is planning a first-of-its-kind, on-course viewing/dining experience for its users. A new “Skyline Seats” section will hoist harnessed fans up to 100 feet above the golf course at the first and 18th holes to enjoy gorgeous views of the grounds and nearby Toronto. 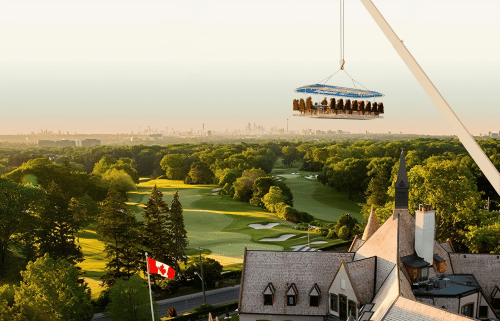 The seating structure can accommodate up to 22 people, and theScore Bet users will also be able to access an exclusive Members Lounge area near the 18th hole for complimentary food and beverages, and participate in BET MODE Putting Challenges.

“To tee off our partnership with Golf Canada and the RBC Canadian Open, we wanted to create
a memorable and completely unique golf viewing experience that adds real value for fans
attending Canada’s premier golf event,” Aubrey Levy, theScore Bet’s senior vice president of content and
marketing, said in an email. “The Skyline Seats is a fresh, new type of sponsor activation for a
sporting event and an execution that showcases theScore Bet brand in a way that speaks to
how we’re innovating and consistently enhancing the fan experience, helping get fans into ‘Bet
Mode’ offline as we do online.”

The RBC Canadian Open, which runs June 9-12, is the first event to take place during theScore Bet’s multi-year partnership with Golf Canada.

Earlier this week, theScore Bet, a wholly owned subsidiary of Penn National Gaming, told Sports Handle‘s Matt Rybaltowski that it will be ceasing sportsbook operations in the U.S. to focus on Canada.

.@theScore alerted customers on Wednesday that it will discontinue its U.S. sports betting operations effective July 1, reports @MattRybaltowski. It will focus on growing operations in its native Canada instead.https://t.co/Ck0D30DBk2

BetRegal is on the verge of announcing another partnership.

Head of Marketing Aly Lalani posted a video on his LinkedIn page showcasing a BetRegal seating area at a football stadium. As the video pans to the field, there’s advertising in the end zone for the University of Manitoba. One could assume this impending partnership will be with the CFL’s Winnipeg Blue Bombers based on this evidence, and an official announcement is expected shortly.

BetRegal is the official sports gaming partner of the CFL and is in the application process for an Ontario iGaming license. Lalani previously told Sports Handle that the sportsbook had plans to launch just prior to the CFL season, which begins June 9.

A recent article in the Canadian sports betting community went viral Wednesday after BetRegal posted a CFL preseason betting line in error last week, paid out winnings on the game, and then voided all winning bets for the contest two hours after the final result was determined. After serious pushback from bettors and a few members of the CFL media community, the sportsbook decided to return the winning bets to customers.

Two other Ontario operators — PointsBet Canada and FanDuel — have partnerships with CFL teams. FanDuel and PointsBet are now aligned with the Toronto Argonauts by virtue of their joint partnership with Maple Leaf Sports & Entertainment, which owns the CFL franchise. PointsBet Canada also has a separate deal with the Ottawa Redblacks.

The gaming world converges on Toronto

Toronto, Ontario’s capital city, will be hosting a pair of major gaming conferences next week.

The Canadian Gaming Summit and SIGMA’s World Gaming Festival will attempt to coexist and share the industry spotlight. SIGMA’s event will run from June 6-9 at the Enercare Centre located on the Canadian National Exhibition grounds, while the CGS runs June 7-9 at the nearby Metro Convention Centre. Many industry professionals have had the daunting task of coordinating their schedules to attend and participate in portions of both events. Luckily, the two venues are relatively close — only a 10- to 20-minute drive apart.

It’s been an eventful year in Canadian gaming following the legalization of single-event wagering last August and the launch of Ontario’s regulated iGaming and sports betting market on April 4. It’ll also be the first time since the pandemic that some industry stakeholders will have the ability to congregate and share ideas.

It’s almost here! We look forward to seeing everyone again, and welcoming you back to #Toronto next week for the Canadian Gaming Summit! pic.twitter.com/w3xElm52D8

Are you ready 👀 for the event, that is revolutionising and introducing new business in the gaming industry throughout the Americas!?#SiGMA ✈️ flies out to Toronto, #Canada for another super conference 💫 Join us between 6-9 June #2022 🤳 Link in the comments below to REGISTER pic.twitter.com/hnrrlwtxWq

It’s no secret that Ontario bettors love to wager on football, hockey, basketball, and curling, but Ontario Lottery and Gaming Corporation reported some heavy action on the French Open tennis tournament this past week.

Two Canadians — Felix Auger-Aliassime in the men’s draw and Leylah Fernandez in the women’s draw — were heavily backed by Ontario bettors at OLG’s PROLINE sportsbook. Auger-Aliassime drew clay court legend Rafael Nadal in the fourth round at Roland Garros on Sunday. But despite being a huge underdog (+500), the Canuck took 69% of the money from PROLINE players. He couldn’t pull off the upset, but did push Nadal to a deciding fifth set before bowing out.

Fernandez’s fourth-round match with Amanda Ansimova was the third-highest-bet match of the tournament at PROLINE to that point. She was a +170 underdog, but still took 53% of the pre-match betting. In-play wagering was heavy on Fernandez, who started strong in the match.

“[Tennis] is ideal for in-game wagering. In fact, it is by far PROLINE’s most popular sport bet in that manner, over 80% of the wagers are made live,” a PROLINE spokesperson told Sports Handle in an email.

After dispatching Ansimova in the fourth round, Fernandez was a -163 favorite against Martina Trevisan in the quarterfinals and accounted for 95% of the pre-match money at the sportsbook. Unfortunately for her backers, Fernandez lost in three sets, ending Canada’s hopes of a champion at Roland Garros this year.