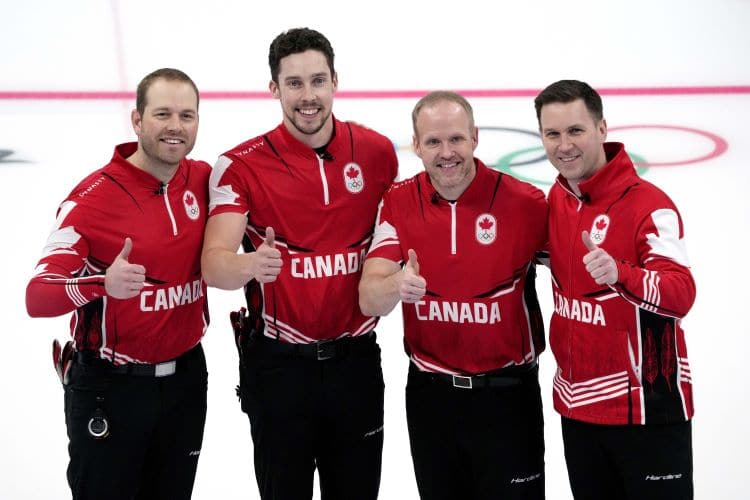 Eighteen men’s curling teams from across the country will compete at the Tim Hortons Brier from March 4-13 in Lethbridge, Alberta, for the chance to represent Canada at the world men’s championship. The 18 teams will be divided into two pools of nine teams for round-robin play. The top three teams in each pool after the round-robin stage will compete in a six-team playoff, which will then be narrowed down to a four-team page playoff to determine the champion. (Odds below courtesy of BCLC PlayNow.)

Brad Gushue and his team earned the right to represent Canada last month at the Beijing Olympics and earned a bronze medal in the men’s event. Fatigue will certainly be a factor, as the team hasn’t had much time to recuperate from its trip overseas. Gushue is looking for his fourth Brier title in the last six years.

Kevin Koe is aiming for a record-breaking fifth Brier title as a skip. He reached last year’s final but came up short against Brendan Bottcher. John Morris, who competed in mixed doubles with Rachel Homan at the Beijing Olympics, is also a part of this stacked team.

The defending Canadian champs went a disappointing 3-5 at the Tim Hortons Curling Trials, ending their hopes of representing Canada at the Olympics in Beijing. Still, Bottcher has made the last four Brier finals.  There was some controversy surrounding the departure of third Darren Moulding this season, but Bottcher’s previous success in this event can’t be questioned.

Amazon Web Services has partnered with Maple Leaf Sports and Entertainment to become the official cloud provider for the company, which owns the Toronto Raptors, Toronto Maple Leafs, Toronto FC, and Toronto Argonauts, among others.

Amazon Web Services will help revamp MLSE’s technology in cloud service, storage, analytics, image and video analysis, virtual reality, and fan engagement, but there will also be gaming and sports betting components. Amazon plans to unveil a “Game Within the Game” digital experience, where fans will be able to track their favorite players, access enhanced game insights in real time, take part in free-to-play gaming, and participate in future on-demand sports betting.

It’s important to note that Amazon will not be providing sports betting services directly, but its technology could enable existing sportsbooks to provide new and enhanced experiences to fans and bettors.

MLSE, which has yet to announce an official sports betting partnership with a sportsbook, is still very much on the market, according to an industry source. Because of MLSE’s unrivaled portfolio of professional sports teams in the province, many sportsbooks have shown interest in partnering with it ahead of Ontario’s April 4 launch of its regulated iGaming market.

NorthStar Bets to launch in Ontario

In an interesting mingling of editorial and betting content, NorthStar Gaming announced last Friday it will unveil NorthStar Bets, an online casino and sportsbook, in Ontario.

“The NorthStar Bets brand pays tribute to our local roots, as a proudly Canadian-owned and operated brand, we take great pride in providing Ontarians with a hyperlocal gaming experience,” said Michael Moskowitz, CEO and a founding partner of NorthStar Gaming, in a press release. “We hope to inspire a sense of home team pride in our players as they discover our platform and unique NorthStar Bets content.”

As part of an advertising and marketing services arrangement with Torstar Corp., readers of thestar.com will have the opportunity to enjoy sports betting and wagering content created by the NorthStar Bets content team.

As of Thursday morning, NorthStar Bets had not received an approved license from the Alcohol and Gaming Commission of Ontario.

There are now six operators with approved licenses from the AGCO that can launch iGaming services in the province of Ontario on April 4. In addition to PointsBet Canada, theScore Bet, and Rivalry, VHL Ontario Limited (888.ca), NSUS Limited (wsop.ca), and Annexio Limited (lottogo.ca) have also been granted licenses.

“We are delighted to have been awarded a license by the AGCO and look forward to launching in the market when it officially opens,” said 888 Holdings CEO Itai Pazner in a press release. “As a group, our focus is on strengthening our presence and offer to customers across key regulated markets. To that end, Ontario represents an attractive long-term growth opportunity for 888 and this is an extremely strategically important milestone for us.”

888 Holdings now has licenses in 19 locally regulated markets, including in seven U.S. states.

Industry sources have told Sports Handle that roughly 30 private operators have applied for Ontario licenses, including Pinnacle Sports, which is licensed in Curacao and Malta and does not have a license to operate in the United States. Amanda Brewer, country nanager at the Kindred Group, also hinted Thursday morning on LinkedIn that she has some “good news to share later today” that could involve the company’s licensing status.

DraftKings CEO Jason Robins made some interesting comments regarding Ontario’s regulated market during the company’s recent earnings call. DraftKings does not have an approved Ontario iGaming license yet, but has applied for one.

DraftKings will not have similar market share in Canada compared to what it expects in the U.S. due to existing "grey" operators $DKNG CEO Jason Robins said, but is still optimistic about the market's potential (particularly Ontario) in large part because iGaming is permitted.