Who would’ve predicted that the Philadelphia Phillies and Houston Astros would be squaring off in this year’s World Series?

Well, one bettor at BetMGM in Colorado placed a $50 bet on the Astros to beat the Phillies in the World Series at 2500/1 odds back in April. The bet would pay out $125,000 if Houston is victorious.

Canada’s Rob Thomson — who hails from Sarnia, Ontario — has led the Phillies on an improbable run to the World Series. He took over as manager of a struggling club that was under. 500 in June, and the team responded by racking up wins in the second half of the regular season, claiming the final playoff spot in the National League and then winning three playoff rounds.

Philadelphia (+140) will send righty Aaron Nola to the hill in Game 1 on Friday night, and the Astros (-166) haven’t yet confirmed their starting pitcher for the series opener, although it’s widely expected veteran Justin Verlander will get the ball. The over/under for runs scored is set at 6.5.

PointsBet‘s latest investor presentation for the period ending Sept. 30 included some interesting insights regarding its performance in Ontario.

Ontario’s regulators have sidestepped questions from the media regarding what the tax rate actually is in Ontario for operators, but it was believed to be “around 20%” of gross revenue. Apparently, there are some deductions operators can make to slash that rate to 18%.

Several other key metrics were also revealed during the presentation: 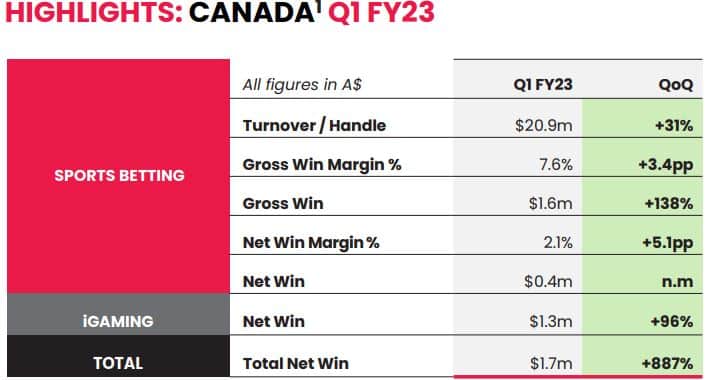 PointsBet was one of the first operators to launch in Ontario on April 4, and live betting represented 59% of its total Ontario sportsbook handle in Q1 FY23. According to the latest revenue report from iGaming Ontario, Ontarians wagered $6 billion and the market produced $267 million in total gaming revenue for the period of July 1-Sept. 30.

Currently, PointsBet is only operating in the province of Ontario in Canada.

The Alcohol and Gaming Commission of Ontario (AGCO) issued a discussion paper this week and is seeking stakeholder feedback on potential regulatory risks associated with promotional partnerships.

This paper is meant to gather input on the possibility of the AGCO taking regulatory action to prohibit the
creation of any physical venue (temporary or permanent) where a purpose of the location is to encourage and/or facilitate the placing of bets.

With the launch of retail casino sports betting on the horizon in Ontario, it appears as though the AGCO wants feedback on the possibility of food/beverage establishments (outside of casinos) doing deals with sportsbook operators. Industry stakeholders can provide their input on the AGCO Engagement Portal and the deadline to submit feedback has been extended to Nov. 7.

The AGCO recently grabbed headlines for winning an international award for its rollout of the Ontario market.

Recently, the @Ont_AGCO was recognized with the @iagr_org Regulatory Excellence Award.

Room 4-4-2 can currently be seen every Monday through Friday on Game+, starting at 5:30 p.m. ET. On-demand viewing of the show is also available at Room442.com. The show is headlined by longtime soccer analyst James Sharman, formerly of theScore, and soccer writer Michael Singh.

“Interest in soccer by Canadians is at its highest level of engagement ever,” said Sharman, a leading soccer voice in Canadian sports media for 25 years, in the release. “There’s a huge appetite for soccer coverage in this country right now, whether we’re talking about the Saturday schedule of Premier League matches, the march to the Champions League title, or Canada returning to the FIFA World Cup for the first time in more than three decades when they compete in Qatar next month.”

Excited to get @TheRoom442 in front of more eyeballs across Canada. Just more evidence that slowly but surely 🇨🇦 is embracing ⚽️ Told ya so!https://t.co/E1dgtXDqfL

Many new Ontario operators, such as Pinnacle and Betano, are banking on the World Cup being a wildly popular betting event in the province.

We haven’t seen the last of Nathan Rourke this season.

Some major news out of the CFL broke on Thursday: The BC Lions quarterback will play in the team’s regular-season finale against the Winnipeg Blue Bombers on Friday night.

Rourke, who hails from British Columbia, set the CFL on fire through the first 11 weeks of the season before injuring his foot and requiring surgery. The team feared Rourke, who threw for an incredible 3,281 yards and 25 touchdowns through nine games, would be lost for the season when he sustained the injury, but he now appears healthy for the playoffs.

The Lions will host the Calgary Stampeders in the Western semi-final on Nov. 6.

BC’s Grey Cup futures odds were as short as +200 prior to Rourke’s injury, but they lengthened to around +500 at most sportsbooks in the weeks after he underwent surgery. Now, books appear to be settling in the middle on the Lions, with the Blue Bombers still the outright favorites at around +115.

The BC Lions are +380 to win the Grey Cup on @FanDuelCanada as we enter the final week of the CFL regular season 👀 pic.twitter.com/7N41YHMDzi