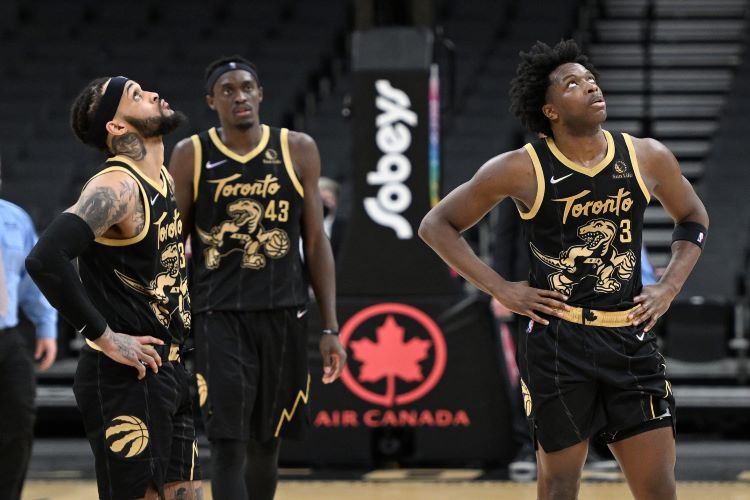 Hopefully, the Toronto Raptors used the All-Star break for some rest and relaxation, because things are about to get wild for Canada’s NBA team. The Raptors will play six games in the first eight days after the break, and four in the first five, all against Eastern Conference opponents. The NBA reshuffled Toronto’s schedule back in January due to COVID-related postponements, creating the upcoming backlog of games:

Toronto sent three players — Fred VanVleet, Scottie Barnes, and Precious Achiuwa — to the All-Star festivities in Cleveland, not leaving much downtime for those key pieces of its team. VanVleet, who leads the league averaging 38.4 minutes played per game, had been experiencing right knee soreness prior to the break. This daunting stretch of games will surely put his knee to the test, especially if head coach Nick Nurse continues to use him at a high rate.

Toronto sits in seventh place in the Eastern Conference with a 32-25 record and still has the 24th-easiest remaining schedule (13 road games, 12 home) despite its upcoming cluster of games, according to Tankathon.

The Raptors’ clash Friday with the Hornets is currently a pick ’em. Toronto is 6-1 against the spread in its last seven road games, and the under has cashed in 10 of its last 13 contests away from Canada. Additionally, Canada’s team has +3900 odds to win the NBA championship and is +600 to win the Atlantic Division behind Boston (+350) and Philadelphia (-200) at PROLINE +.

A few notes regarding sports betting developments in the provinces of Alberta and Saskatchewan:

The online survey, conducted last year from Sept. 22-Oct. 1, polled more than 1,000 Canadian consumers aged 18 or older, including likely bettors and non-bettors from varying financial situations and geographic regions. It’s important to note that Canada legalized single-event sports wagering on Aug. 27, roughly one month prior to the study being conducted. Deloitte Canada estimates that single-event sports betting could result in $28 billion in legal-market wagers by five years post-reform.

The study suggests only one in five Canadian adults was aware when surveyed that single-event sports betting is now legal in the country. Just over 37% of respondents expressed an eagerness to place legal sports event wagers, but were unlikely to do so, citing a lack of information and uncertainty about how betting work would under the new rules.

Bettors are broken down into three categories in the study — ardent, casual, and potential — and the conclusions are that the Canadian sports betting market largely consists of potential bettors (58.5%) who still haven’t placed their first legal wager, and who will require massive education in sports betting practices. Sports Handle will further examine the study in an article to be published Friday.