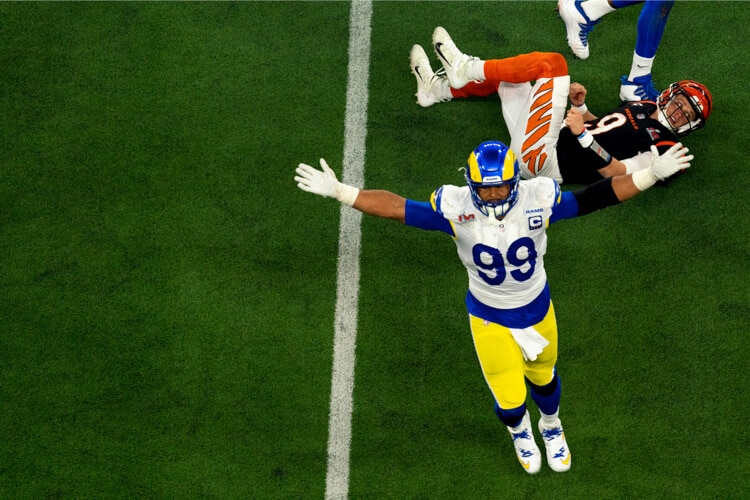 At the same time, about 5.6 million accounts accessed legal online sportsbooks on Super Bowl weekend, a 95% increase from the previous year, according to GeoComply. New York also ranked first in that category, representing around 20% of nationwide accounts identified by GeoComply.

The figures likely would have been higher had the Buffalo Bills ended a two-decade-plus Super Bowl drought. The Bills, one of the top favorites to reach the Super Bowl, suffered a crushing overtime defeat to the Chiefs in the AFC divisional round, a game in which they took the lead with 13 seconds left in regulation. On Monday, New York Gov. Kathy Hochul disclosed that New York handled nearly $2 billion in online sports wagers over the market’s first 30 days of operations.

Even though the Bills aren't playing in the big game, you can bring a little Buffalo to your Super Bowl party with some of our famous chicken wings.

“I always knew New York had this kind of potential, being one of the sports meccas and capitals of the world,” Addabbo told the Gamble On podcast on Wednesday. “But I’m quite surprised sometimes at some of these numbers.”

At present, seven of the nine licensed mobile sportsbooks are live in New York, led by industry heavyweights FanDuel, Caesars Sportsbook, BetMGM, and DraftKings. BetMGM CEO Adam Greenblatt told the Financial Times on Monday that BetMGM took more digital bets in New York than in any other state in which it operates.

Ahead of the Super Bowl, the American Gaming Association predicted that a record 31 million Americans were expected to bet on the event, resulting in a handle of about $7.6 billion. It is important to note that the estimates also included projected betting on the unregulated black market, consisting of offshore sportsbooks and wagers placed with illegal U.S. bookmakers.

A record 31 million Americans are expected to bet on the #SuperBowl this weekend, with predicted wagers expected at more than $7.6 billion. @contessabrewer reports on how some virtual sites are turning to real dealers to attract gamblers. pic.twitter.com/ojBo7Nf4AW

The NYSGC indicated on Monday that it will not report a separate breakout for Super Bowl wagering activity. The commission, rather, will include Super Bowl-related betting activity in Friday’s weekly mobile sports betting report.

Nevertheless, there appears to be a strong likelihood that New York reached $200 million in Super Bowl handle, even by conservative estimates. On Tuesday, neighboring New Jersey reported a Super Bowl handle of $143.7 million, second only to Nevada’s $179.8 million on the event. New York’s population is more than double that of New Jersey.

Turning back to GeoComply’s data, there are further indications that New York may eclipse the $200 million threshold. If New Yorkers averaged $12.50 per bet on 20 million wagers placed, the handle would approach an astounding $250 million. According to GeoComply’s figures, about 20.02 million transactions were identified in New York.

The average wager at DraftKings’ Illinois sportsbook in December came in at $47.80 (on a sample size of six million wagers). The Illinois metrics are gleaned from a mix of pro and college football on the month. Over the first 30 days of online sports wagering in New York, the sportsbooks handled more than $600 million on football, the NYSGC disclosed. The handle includes last month’s College Football Playoff national championship, contested on the third day of mobile sportsbook operations in the Empire State.

Next up: March Madness

Following the Super Bowl, the sports betting industry enters a relatively quiet period before the start of the NCAA Division I Men’s Basketball Tournament on March 15. The KeyBank Center in Buffalo will serve as one of eight regional sites for the first and second rounds of the tournament, more commonly known as March Madness.

By then, it’s possible one of the two remaining holdouts, Bally Bet and Resorts World, will have made its New York debut.

Addabbo, who pushed for an open market with more than a dozen mobile skins in New York, is impressed with the early returns considering that the state only has seven online sportsbooks.

“I’m amazed at those numbers, given the circumstances,” Addabbo added.