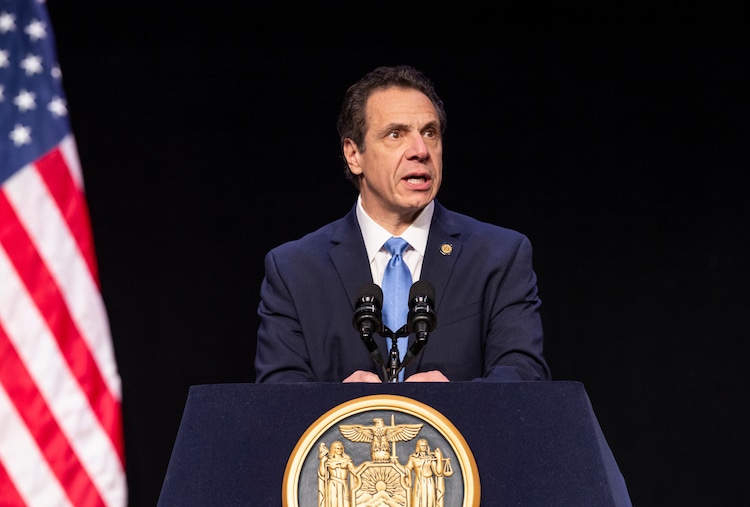 A New York State Senate committee passed a measure that could lead to the legalization of online sports gambling in the Empire State, firing the latest salvo in a contentious battle surrounding mobile betting in one of the nation’s largest markets.

The bill, S17 D, advanced to the Senate Finance Committee this week after it was passed by a unanimous 7-0 vote in the Senate Racing, Gaming And Wagering Committee. A similar version of the bill, S17, was passed by the Senate in 2019, but effectively died when the measure was not taken up for a vote by the State Assembly.

The move came days before Gov. Andrew Cuomo was scheduled to release the state’s Fiscal Year 2021 budget proposal. Cuomo, a three-term governor, continually expressed resistance to supporting mobile betting throughout 2019 while his administration questioned the constitutionality of the activity.

Gov. Andrew Cuomo will give his 10th annual address on the state budget Tuesday at 1 p.m. in Albany.@NYNOW_PBS & @WMHTPubMedia will take it live. I'll be hosting our coverage with @poozer87

There was no mention of mobile sports betting in Cuomo’s 2020 State of the State address on Jan. 8 with the budget address expected to come on Jan. 21.

Cuomo and Sen. Joseph Addabbo Jr., chairman of the Senate’s Racing, Gaming and Wagering Committee, remain at odds on several issues related to mobile gambling. Over the last year, Addabbo has invoked a traffic analogy to express his displeasure with New Jersey’s proliferation of mobile betting.

Addabbo, a Democrat from the 15th district in Queens, has described New York as a car stuck in the right lane while its neighbors with mobile sports betting speed past in the furthest lane to the left. Of New Jersey’s $557.8 million in handle for December, $488.9 million or approximately 88 percent came via online/mobile wagering.

“We took a step forward last year in permitting sports betting in several upstate casinos, but adding the mobile wagering component is crucial to reaping the benefits of this gaming activity and enabling us to compete with other states,” Addabbo wrote in a Jan. 8 statement.

When Cuomo signed the upstate New York Gaming Economic Development Act in 2013, New York amended the state constitution and paved the way for the four upstate casinos to eventually accept sports wagers —  wagers made in person, as online bets were not contemplated in the act. At the time, the casinos could not offer sports betting due to the decades-long federal ban on the activity in every state nationwide, besides Nevada.

Cuomo’s administration has taken the position that a constitutional amendment is required to approve mobile sports betting in New York State. Pursuing such an avenue invites a lengthy process. State law requires a constitutional amendment to be approved by two consecutive sessions of the state legislature before it appears on a ballot referendum the following year. At the earliest, the amendment could not appear on a ballot until 2022.

Addabbo believes there is another pathway to bring mobile to New York. The senator is studying whether mobile sports betting is legally permissible statewide if the mobile server that facilitates the wagering is physically located inside an upstate casino. Attorneys for the State of Rhode Island made a similar argument last year when Gov. Gina Raimondo signed a bill into law authorizing mobile betting in the Ocean State.

“We need to maximize that by using those four sites, putting the servers there and now allowing it to be statewide, so even people downstate can use their mobile device because the server satisfies the constitution,” Addabbo told Sports Handle at the Sports Betting USA Conference in November.

Cuomo is facing a projected budget deficit of $6 billion in 2020, the largest of any single year during his tenure as governor. Some argue that the addition of mobile sports betting will do little to put New York on the right path to fiscal stability.

New Jersey collected $36.5 million in taxes from legalized sports betting in 2019, with $31.8 million coming from a 13 percent tax on mobile sports wagering. An estimated $5 million to $6 million came from New Yorkers who placed wagers in the Garden State. Last March, Cuomo told WAMC radio in Albany that the New Jersey figures (which he pegged at around $13 million) amount to nothing more than a “rounding error,” in New York’s budget.

Either way, Cuomo and Addabbo appear nowhere close to coming to a consensus on mobile sports betting. Unless both sides can reach a compromise come June when the legislative session ends, the process could repeat again this time next year.