Will The Forthcoming Ohio Sports Betting Bill Include College Sports?

Ohio State fans, at least according to one talk show host, will riot if not 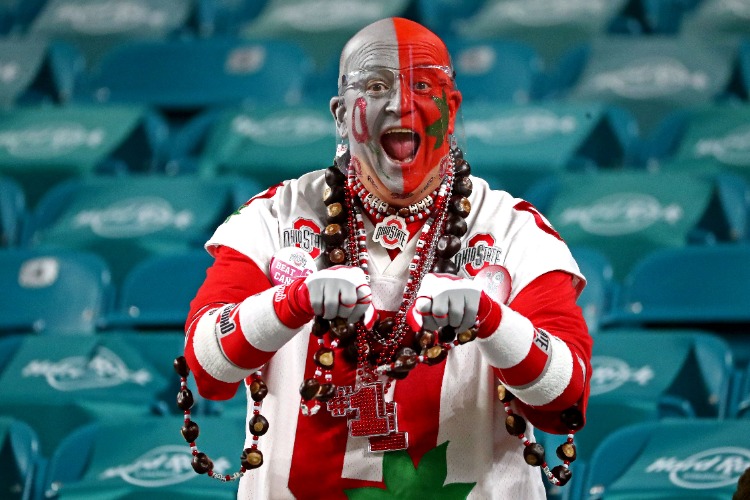 When it comes to rabid fan bases, there are few that compare to Ohio State Buckeye football fans. It’s not just us saying that; Bleacher Report has them ranked as the third most rabid group, Yardbarker at number six.

Of course, there will be haters. In fact, USA Today has Ohio State boosters ranked as the second most annoying group of fans in the college football world, Bleacher Report calls them the fourth rudest, and Fansided has them as the second most intolerable.

But despite the fact Ohio State — sorry, THE Ohio State — football fans are clearly passionate about their team, it’s possible we haven’t heard the loudest roar from them yet. And it would be a roar of displeasure, should the forthcoming Ohio sports betting bill include a provision that would prohibit betting on their beloved Buckeyes.

To be clear, there is nothing in the tea leaves that points to the forthcoming bill in Ohio not including collegiate sports betting, and, in fact, the bill that died last year did include it.

But during the state Senate Select Committee on Gaming hearings last month, a very powerful voice stepped up to the microphone and asked the committee to deep six betting on college sports.

“We believe it jeopardizes the welfare of student athletes and the inter-collegiate athletic community,” Bruce Johnson, the president of Inter-University Council of Ohio and former lieutenant governor of Ohio, told the committee last month. “If wagering on collegiate athletics is permitted, it would not take a great leap of logic to conclude the risk of student athletes soliciting and accepting payments to influence the outcome of games might increase.

“While we may like to believe that our student athletes are men and women of impeccable integrity, and most of them are, it would be naive or irresponsible to simply dismiss or ignore the temptation to compromise performance or trade on information in exchange for financial gain which becomes increasingly real and significant with legalized sports wagering on college athletics. Unfortunately, it’s human nature.”

Johnson went on to list a litany of other reasons why betting on college athletics should be prohibited, from the “costly regulatory” measures the colleges would have to implement to worries about problem gambling on campuses to correlating sports betting with “other risky behaviors.”

He called the whole idea of bringing colleges into the sports betting world “bad public policy.”

And he’s not exactly alone, as other states have gone down this path. Oregon is the only state with live, legal sports betting in which there is no betting on colleges. The Oregon Lottery’s ScoreBoard app only offers wagering on pro sports. Oregon lawmakers did not have to pass new legislation to legalize sports betting there — the state was grandfathered in for sports betting even before PASPA fell in 2018. Previous law prohibits wagering on New Jersey college teams in New Jersey, and lawmakers in made it illegal to bet on the home team in Delaware, Illinois, New Hampshire, New York, Virginia, Washington, Rhode Island, South Dakota, and Washington, D.C.

So it’s possible the legislature in Ohio sees fit to do the same and prohibit wagering on the Ohio college teams when the bill drops, which can happen at any moment now.

“Yeah, there would be a big outcry. It would be pretty major,” said Tim Hall, the host of The Buckeye Show on 97.1 The Fan Sports Radio. “Dude, people are driving two hours and 20 minutes west to cross state lines into Indiana, maybe swing by Steve Alfords All-American Inn and stand by the high top and place a bet. It’s ridiculous you can take it into another state where it’s legal and potentially not be able to do it here.”

Hall’s show — which broadcasts Monday through Friday from 6-8 p.m. — is all Buckeye football, all the time. Again: It’s a rabid fan base.

“I don’t want to speak for Cleveland or Cincinnati, but around here, it’s Buckeye football, and then everything else,” Hall said, adding that if he did a call-in show, “every line would light up if the bill comes out without collegiate sports betting.”

Hall, for his part, just doesn’t understand the rationale behind the stance of the Inter-University Council of Ohio.

“What’s the difference?” he wondered. “There’s this fear about scandals, with gamblers infiltrating collegiate sports, but nobody seems to have that fear with professional sports. And we have been betting on it in the states that have legal sports betting. I don’t know why they’re trying to draw these lines.”

Waiting for the bill

"Legislators must decide which agency will regulate sports betting, be it the Casino Control Commission which oversees the state's four casinos, or the Ohio Lottery…"

In the end, whether college athletics makes the cut in the Ohio sports betting bill will come down to the bill’s authors — and any backroom machinations that get the bill to the floor.

While Johnson is clearly a powerful figure in Ohio politics, his position with the Inter-University Council of Ohio didn’t move the needle on the proposed legislation last year.

But then again, that legislation didn’t make the cut.

In the meantime, fans of Buckeye football who wish to wager on their teams will just have to continue to play the waiting game and wait for the bill — sorry, THE bill — to drop.