Is It Uh-Oh In Ohio For The Sports Betting Bill? 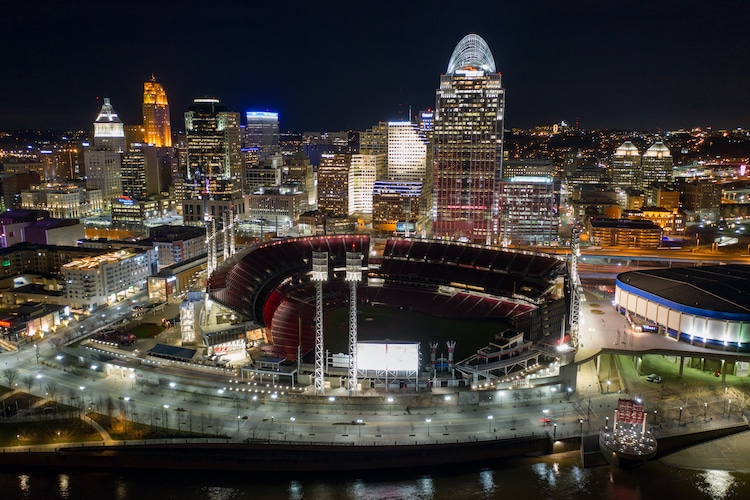 Aerial photo of the Paul Brown Stadium in Cincinnati (Shutterstock)

Make no mistake: The Ohio Senate has declared war on the casino industry.

And while this may sound like something that ends up as a major plot point in a future Martin Scorsese film, the fact remains the Senate’s sports gambling bill — which sailed through the chamber with a 30-2 vote last Wednesday — completely cuts out the casino industry in favor of Ohio’s professional sports teams.

“We were shocked and dismayed to see the latest changes to the bill in the Senate,” Eric Schippers, the senior vice president for public affairs for Penn National Gaming, told Sports Handle in an emailed statement. “The Senate is inexplicably handicapping this for the teams, the PGA, and the promoter of a stock car race to get retail sports betting licenses, when the fact is having a retail sportsbook in the casinos/racinos will help boost incremental revenues from the higher taxed slot machines by as much as 25% based on our experience in other states.

“The Senate is leaving all that money on the table by trying to keep sportsbooks out of the casinos, where we spend millions annually on security, surveillance, and comprehensive responsible gaming programs to protect the integrity of gaming in Ohio.”

And while it may be easy to poo-poo Schippers’ statement, to say he’s part of the industry, to say it’s theatrics, know this: It ain’t. Just take a look at this quote from one of the bill sponsors, Sen. Niraj Antani.

“The sports teams are longstanding Ohio businesses that have been around for decades, that have contributed greatly to the Ohio economy, have created tons of jobs, have huge economic impact,” Antani told Cleveland.com. “The casinos ran a constitutional amendment, came in with out-of-state money, forced their way into the state of Ohio. So, yes, there’s a preference in the bill for the businesses that operate in the free market. The casinos forced their way, they bought their way through a ballot initiative in 2009.”

Furthermore, professional sports teams and leagues would get state-sanctioned preferential treatment if they choose to go after a license.

And it doesn’t take a geography major to see the issue.

For instance, Penn’s Hollywood Casino is located in Columbus, which is in Franklin County, population 1.26 million. That county would be eligible for a trio of licenses.  Also in Columbus are the NHL’s Blue Jackets, MLS’s Crew, and the PGA’s Memorial Tournament. And there go the three licenses.

Cincinnati is in Hamilton County, population 802,374, so it gets two licenses. The Reds and the Bengals are shoo-ins to get one. Sorry, Hard Rock Casino.

House not bringing it home?

Just because the bill passed the Senate doesn’t mean it becomes law. It first has to pass through the Ohio House before it gets to the desk of Gov. Mike DeWine.

And there are already rumblings that for the third time in four years, the two chambers of the legislature aren’t seeing eye-to-eye, thus imperiling the legislation.

Rumor du jour: OH House speaker may issue a statement today or tomorrow that would put the brakes on the Senate-passed #sportsbetting bill, putting in doubt the prospect of final passage by June 30.

Furthermore, even members of the Senate who voted “yea” had major reservations about how the retail sportsbook licenses will be doled out.

“As you know, for me it’s all about Cleveland and Cuyahoga County,” said Sen. Sandra Williams during last Wednesday’s vote. “And Cleveland has three sports teams, and they’re very good. But if each one of those teams applies for the license, then the organizations in my district who do this for a living — Jack’s Casino and Thistledown racino — won’t have an opportunity to participate in something they do for a living, gaming. So I will support this bill, but I hope you will consider changing the B provision to allow for a few more licenses for those individuals who want to participate in gaming in our communities.”

Also speaking out against the bill as written was minority leader Sen. Kenny Yuko, who likened the legislation to creating a new bill for farms but cutting out current farmers.

“The very same people who brought us so much for Ohio, who shared all that money with 88 counties, who have done so much for our schools, we’re kind of saying that we can’t help you because, as Sandra pointed out, we’re going to have three sports teams to cater to Cleveland’s demands,” Yuko said. “We’re going to have three sports [sportsbooks] here in Columbus. Cincinnati will get two, the Reds and the Bengals — is that one-and-a-half or two? Sorry — but the bottom line is the very casinos who brought us to having this conversation we’re having today are kind of being forced out. And I’m kind of concerned about it. Can we fix it in the House? I hope so.”

Whose type is it anyway?

The Ohio Senate Select Committee on Gaming met for months on a weekly basis in an effort to create a bill that would bring sports betting to Ohio.

And while the committee managed to get the bill out of the Senate, it is, in a word, unwieldy.

In addition to the 33 Type B licenses, there are also 25 Type A licenses, which would allow for mobile operations. And each Type A license-holder would be allowed to team up with two mobile operators — think  DraftKings, FanDuel, PointsBet, etc. — which means there could be upwards of 50 online sportsbooks in Ohio.

Additionally, and at the last minute, the committee also added a Type C license, which would allow bars and restaurants in the state to have a limited number of kiosks where patrons would be capped to a $200  maximum daily bets, and would only be able to wager on spreads, over/unders, and moneylines.

Meanwhile, the committee set a self-imposed June 30 deadline to get the bill the governor. With the House thus far mum on what it plans to do with the legislation, that deadline is looking unlikely, especially considering there are only two scheduled House sessions this month (with three on the calendar “if needed”).

So: Can’t you just see it now? The dark screen, a quick shot of Leonardo DiCaprio as Eric Schippers, while the movie guy intones, “In a world where a state legislature declared war on the casino industry …”