Sports-Betting Legalization Effort Is Dead in Oklahoma, for Now 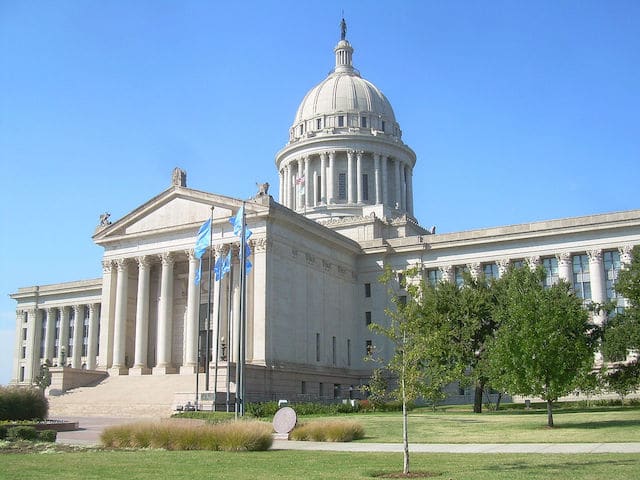 Oklahoma Governor Mary Fallin signed into law on Tuesday House Bill 3375, permitting an expansion of the state-tribal gaming compact in the state to include “ball and dice” casino games, which had been prohibited since 2004.

But it’s no dice for Oklahoma sports betting. An earlier version of HB 3375, which passed both chambers on Friday, included language that would have also expanded the compact to allow sports wagering.

It’s the second year in a row that efforts to set the table for sports wagering have fallen short. In this case, the language that would have permitted sports betting was struck in a floor amendment by bill sponsor Representative Kevin Wallace (R-District 32) in March, about midway through the process. Wallace’s office did not respond to SportsHandle‘s request for comment on Tuesday.

As in California, Washington, Minnesota and Connecticut, among other states, tribal casinos and lobbyists wield a great deal of influence as a by-product of payments made to states in accordance with their compacts and exclusivity agreements, which are highly lucrative for those states.

According to the Oklahoma Gaming Compliance Unit 2017 fiscal report, the state collected more than $133.9 million in tribal gaming exclusivity fees in 2017 alone. Every year since 2009, tribal casinos have sent more than $100 million to the state annually, benefiting the state’s Education Reform Revolving Fund (education in Oklahoma is a whole separate and dire situation right now), the General Revenue Fund and the Department of Mental Health and Substance Abuse Services. Currently 32 tribes operate almost all of the state’s 60 casinos and racinos.

In 2017, Rep. Leslie Osborn (R-District 47) co-sponsored a bill aimed at legalizing sports betting in the state, pending a change in federal law, i.e. the repeal of the Professional and Amateur Sports Protection Act (PASPA).

“Last year, we ran several bills that would have brought in additional revenue for our budget problems in the state,” Obsorn said in December 2017. “One was a tribal-gaming bill that would have expanded to roulette, and also to sports gambling or betting.”

“My belief is, from what most people are saying, that will probably pass,” Osborn added in reference to sports wagering.

Her bill didn’t make it out of committee in 2017. But HB 3375, although commingling sports betting and “ball and dice games” (where the house or casinos are not  a participants in the game), offered a better shot for sports wagering in light of the advancement of the Supreme Court sports betting case (aka Murphy v NCAA), in which a decision is forthcoming this spring. If New Jersey (Murphy) prevails in the case and PASPA is repealed, numerous states will continue efforts to legalize sports betting and a couple already have.

HB 3375 would have applied a 10-percent tax rate on sports wagering revenue. As introduced, the bill did not address how sports wagering would be conducted on tribal casino premises, or on mobile, or according to what procedures or regulations.

Although we don’t know the specifics of back room discussions between lawmakers and the tribes, we can surmise that Oklahoma is more likely to wait and see on the Supreme Court and on sports betting in general for a year or two. According to sources, at least one of the tribes did express interest in recent months in adding sports betting as a casino offering. The state’s current legislative session ends on May 25.

At a national level, tribal representatives are lukewarm on sports betting, in part because so far it’s an unknown and generally low-margin business, and the tribes simply aren’t eager to jump at making any alterations to the their compacts or exclusivity agreements.

“Of chief concern to [the National Indian Gaming Association] is to ensure that tribal interests are protected, particularly avoidance of any negative impacts on existing compacts and exclusivity clauses,” said the group’s chairman Ernie Stevens Jr. in July 2017.