Gambling bills on the docket at New Jersey Assembly session

Approximately a dozen gambling-related bills are on the agenda at a New Jersey Assembly session, including one that seeks to earmark an additional $5 million in state funds to thoroughbred purses throughout the Garden State. Also on Monday, the New Jersey Senate Budget and Appropriations Committee will consider a measure that aims to exempt sports betting from casino payment in lieu of taxes (PILOT) calculations. If passed, the bill could lower 2022 state PILOT payments to approximately $110 million during the fiscal year.

Over the last month, the Buffalo Bills have dropped from Super Bowl favorite to AFC wild card contender after several puzzling defeats. At the same time, the New England Patriots have emerged as the hottest team in the NFL with six straight wins. On Monday night, the AFC East rivals will square off with first place up for grabs in the division.

The Bills are 2.5-point favorites at PointsBet, while the total is 41. Bills quarterback Josh Allen ranks fourth in the AFC in passing yards per game at 279.2. Allen will face a stingy Pats defense that ranks third in the NFL against the pass with only 200.9 yards allowed per contest. The following four-leg parlay at FanDuel will pay $3,322 on a $100 wager. 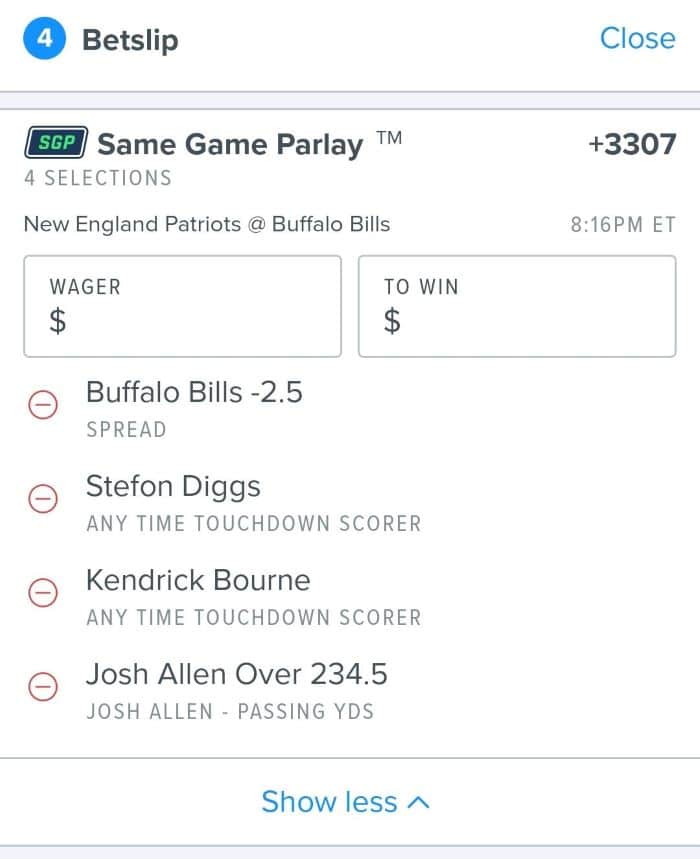 While DraftKings has operated a temporary retail sportsbook at Foxwoods Resort Casino since September, the company is ready to roll out a glitzy two-story facility at the Connecticut venue. DraftKings CEO Jason Robins is scheduled to make an appearance at Wednesday’s grand opening, along with Foxwoods CEO Jason Guyot and Mashantucket Pequot Chairman Rodney Butler.

Robins made waves last week with controversial remarks that customers who engage in “bonus shopping” are not the ones that appeal to DraftKings. Investors could learn more about DraftKings’ customer acquisition strategy in New York and other nascent mobile sports betting states at Wednesday’s event. Robins also defended the company’s valuation last week after famed short seller Jim Chanos revealed that he has been shorting DraftKings for the majority of 2021.

"We are not trading anywhere near 30x revenue. It's less than half of that," says @JasonDRobins. "@WallStCynic is a smart guy I'm sure he knows better–we are not really focused on people selling short. We are focused on people who are believers." pic.twitter.com/b237MCB7Tr

Alabama secured a spot in the four-team College Football Playoff on Saturday with a resounding 41-24 victory over then-top-ranked Georgia in the SEC Championship. Crimson Tide quarterback Bryce Young set championship game records in two categories with 421 passing yards and 461 total yards of offense.

For most of the season, the 2021 Heisman race has lacked a clear frontrunner. But Young now has overwhelming odds of -6000 to win the Heisman Trophy at Saturday night’s ceremony, held at the Marriott Marquis in New York. Michigan defensive end Aidan Hutchinson, the second choice at FanDuel, has odds of +1600. Pitt quarterback Kenny Pickett (+3000), Ohio State quarterback C.J. Stroud (+4000), and Ole Miss quarterback Matt Corral (+6000) round out the Top 5. Young could become the third Crimson Tide player to win the Heisman in the last seven years.

While the Portland Timbers have made two prior MLS Cup appearances, the franchise will host the league finals for the first time on Saturday in a matchup against New York City FC. The Timbers have been stifling on defense in the last month, outscoring opponents 6-1 over their three previous matches. On Saturday, Portland will host NYCFC, a 2-1 winner over Philadelphia Union in the Eastern Conference finals. Both teams have moneyline odds of -110 in Saturday’s matchup. The teams did not meet in the regular season.

All roads lead to Portland. 🛣 pic.twitter.com/r21SENgvqS

Hamilton and Verstappen vie for F1 title in Abu Dhabi

Lewis Hamilton won the inaugural Saudi Arabian Grand Prix on Sunday to draw even with Max Verstappen on points for the Formula One season. Hamilton’s victory contained numerous twists and turns, including several run-ins with Verstappen. At one point, Verstappen went off the track on lap 37 to prevent Hamilton from making a pass around the first turn of the 3.8-mile track. Verstappen, a Red Bull Racing driver, received a five-second delay for veering off the track.

The two will face off again in Abu Dhabi in the season finale on Sunday. Hamilton, a seven-time F1 champion who’s won the last four driver titles, is a -225 favorite over Verstappen (+165) to make it five straight.

Hamilton quarterback Dane Evans came off the bench Sunday to spell starter Jeremiah Masoli in a 27-19 win over Toronto in the CFL‘s East Division final. With the victory, the Tiger-Cats earned a rematch in Sunday’s Grey Cup with Winnipeg, a 21-17 over Saskatchewan in the West Division final.

While the Grey Cup was not held last year due to COVID-19, the same two teams met in the Grey Cup in 2019, with Winnipeg prevailing by a score of 33-12. Hamilton looks to capture its first Grey Cup since 1999, while Winnipeg enters the Grey Cup with the CFL’s top mark at 12-3.

The hometown Hamilton Ti-Cats will take on the powerhouse Winnipeg Blue Bombers at Tim Horton's Field!

Who will be crowned football champions of Canada?!

Kansas City pushed its season-high winning streak to five on Sunday night with a 22-9 win over the Broncos and will next face the Las Vegas Raiders in Week 14 in another key AFC West showdown. The Chiefs hold a one-game lead over the Los Angeles Chargers and a two-game lead over the Raiders and Denver Broncos with five games left.

Also on Sunday, the Browns host the Baltimore Ravens in Cleveland, where the Browns are 1.5-point favorites at Caesars Sportsbook. Much like the AFC West, there is a tight race in the AFC North, where the Ravens hold a one-game lead over the Cincinnati Bengals. The Browns and Pittsburgh Steelers are also still alive for the playoffs.