Tom Brady dropped a bombshell on Sunday night when he announced his return for the 2022 season after a brief retirement. The odds on the Tampa Bay Buccaneers moved dramatically following the news, with the Bucs now a co-second choice at FanDuel to win the Super Bowl. The Bucs and Packers are both at +750, just behind the Bills (+700).

Brady’s return removes the Bucs as a potential suitor for Deshaun Watson. Last week, Watson learned he will not face criminal charges in connection with sexual misconduct allegations. A Houston grand jury decided last Friday that it will not indict Watson on any of the charges. Watson, a three-time Pro Bowl quarterback, missed the entire 2021 season amid the allegations.

Less than 24 hours after the grand jury’s decision, a rumor surfaced that the Panthers will make an aggressive offer in an attempt to trade for Watson. There is also increased speculation that the Panthers are willing to offload All-Pro running back Christian McCaffrey if another team makes an attractive offer. At BetMGM, the Panthers enter free agency with odds of 50/1 to win the Super Bowl. Like the Panthers, the Steelers, Saints, and Seahawks have vacancies to fill at quarterback.

Rare Monday finish at The Players

Weather has wreaked havoc at The Players Championship. Due to persistent rains and heavy winds, The Players will conclude with a Monday finish for the first time in tournament history. On Sunday night, tournament officials suspended play in the third round because of darkness. When play was suspended on Sunday evening, all 71 players who made the cut remained on the course.

Sam Burns opened with rounds of 68-69 before finishing the third round on Monday with a one-under 71. At DraftKings, Burns was favored before the final round to win The Players, with odds of +500. Anirban Lahiri entered the final round on Monday afternoon at -9, with a one-shot lead over several golfers, including Burns. Cameron Smith and Paul Casey were the co-second choice at +700. Defending champion Justin Thomas was six shots back at 3-under, with odds of +7000 to take home the $3.6 million winner’s check at the lucrative tournament. 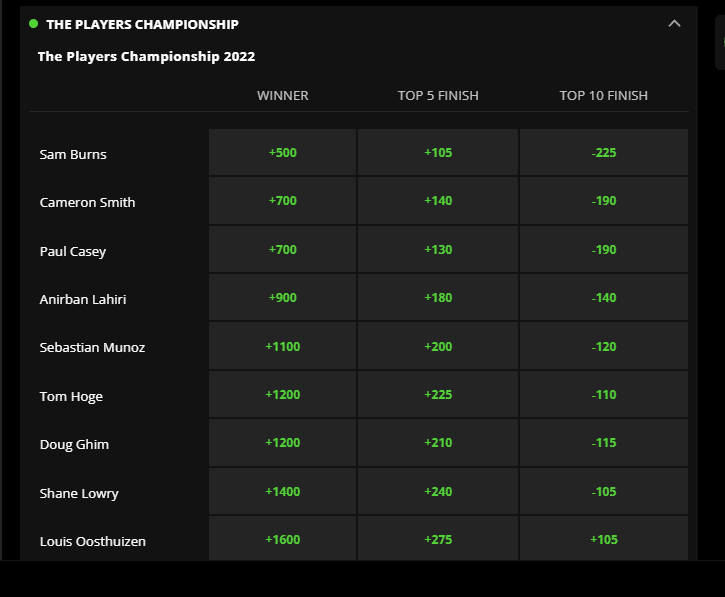 Indiana snuck into the tournament as an at-large team after upsetting top-seed Illinois in the Big Ten conference tournament. The Hoosiers then led Iowa for most of Saturday’s semifinal, before the Hawkeyes closed on a 22-10 run for a three-point win. Indiana has odds of 45/1 to earn a spot in the Final Four.

In the opener, Texas Southern will take on Texas A&M-Corpus Christi in a matchup between two No. 16 seeds. Texas Southern is a 3-point favorite, and the total is 135.5 points. The winner will face Kansas in the Round of 64.

Chelsea enters the second leg of Wednesday’s Round of 16 matchup against Lille with a 2-0 aggregate lead. But the defending UEFA Champions League title holders has larger concerns. Sanctioned last week by the UK government for his ties with Russia president Vladimir Putin, Chelsea owner Roman Abramovich had his assets frozen by the UK Treasury’s Office of Financial Sanctions Implementation. Although Abramovich has already placed the club for sale, Chelsea will have its travel budget limited in this week’s trip to France. At PointsBet, Chelsea is a -115 favorite to defeat Lille (+300) in regulation.

Double-digit seeds offer value in Round of 64

Coach K sympathy seeding, if I had to guess. That is a weird placement.

Also that region gives K a potential second round matchup with Izzo and Michigan St, a sort of"end of an era" game.

Depending on the results from the Round of 64, there could be several other juicy matchups on Sunday. They include: Purdue-Texas, Auburn-USC, Villanova-Ohio State, and Arizona-TCU. Arizona, the Pac-12 tournament champion, has odds of +600 at Caesars Sportsbook to win the national title. The Wildcats are the second choice at Caesars, behind Gonzaga.