After a thrilling 122-112 overtime win against the New Orleans Pelicans on Sunday, the New York Knicks extended the team’s longest winning streak since 2014. Now sixth in the Eastern Conference, the Knicks can move closer to a playoff spot with a victory Tuesday night over Charlotte. Nevertheless, the Knicks still have odds of 100/1 to win the Eastern Conference at FanDuel, tied for eighth-highest with the Bulls. Keep an eye on player props featuring Julius Randle in Tuesday night’s game. Randle, the All-Star forward, has led the Knicks in points in each of their last five games. During the five wins, Randle averaged 33.8 points and six rebounds per game. Nerlens Noel, Randle’s front-court mate, is also averaging three blocks per contest over that span.

Fun to watch the Knicks with this winning streak. Nerlens Noel is a big time rim protector-his stats don’t do justice to his value!

When the Vancouver Canucks face the Toronto Maple Leafs on Tuesday night, the Canucks begin a frenetic stretch of six games in 10 nights. The Canucks defeated the Leafs 3-2 on Sunday in their first game back from a three-week COVID-19 layoff. Through Sunday, Vancouver has played a league-low 38 games. Although the Canucks trail the Canadiens by 10 points for the final playoff spot in the North Division, Vancouver still has four games in hand. The Canucks, who made the Western Conference semifinals last season, face an uphill climb to make the playoffs. Vancouver has 18 games left in the next month to make up the 10-point deficit. The Canucks have odds of 16/1 to make the playoffs at FanDuel.

Investors will learn more about BetMGM’s plans for future growth during a series of Investor Day presentations on Wednesday. It comes several days after Entain Plc noted that BetMGM maintains a market share of approximately 19% in the states it currently operates in. Rumors continue to swirl that MGM Resorts and Entain could renew merger talks months after MGM abruptly pulled an offer for the European gaming platform earlier this year. MGM Resorts opened on Monday at $40 a share, up about 25% on the calendar year.

Months after voters in the majority of Louisiana’s parishes voted to legalize sports betting in November, the Louisiana House of Representatives is scheduled to consider a bill on sports wagering at a hearing on Wednesday. At Wednesday’s session, members of the House Ways and Means Committee will debate HB 628, a bill that authorizes the Louisiana Lottery Corporation to conduct sports wagering. On Election Night, voters approved legal sports wagering in 55 of the state’s 64 parishes.

With the NBA and NHL Playoffs pushed back by a few weeks, top sportsbooks nationwide have turned to the NFL Draft to partially offset the loss in handle in late April. By Thursday evening, the bets will continue to pour in with the Draft only a week away. At William Hill, you can bet on the first non-quarterback to be selected in this month’s Draft. Since the top three picks are widely expected to be quarterbacks, the No. 4 spot will be closely monitored over the next two weeks. While the Atlanta Falcons currently hold the fourth pick, the Falcons could trade down for the right offer. Florida tight end Kyle Pitts (+140) is favored to be the first non-quarterback taken, just ahead of Oregon offensive lineman Penei Sewell. 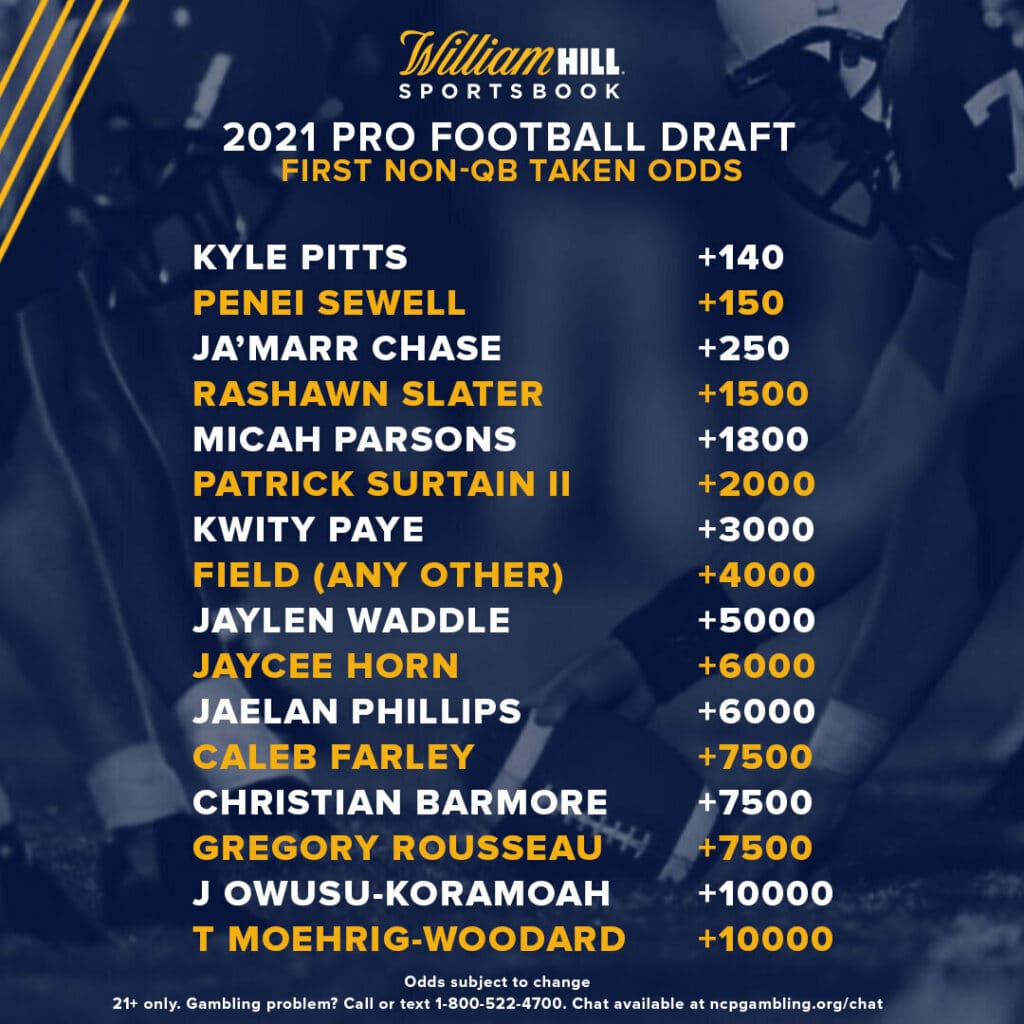 South Dakota State opens the FCS playoffs on Saturday with a home game in Brookings against unbeaten Holy Cross. With a win, the top seed Jackrabbits will advance to face the winner of Weber State-Southern Illinois in the FCS quarterfinals. Weber State (+300) opened the season as the second choice to win the national championship at DraftKings. North Dakota State, which has won eight of the last nine national titles, was installed as the overwhelming favorite to capture the title at the start of the season. But the Bisons stumbled in February in a lopsided 38-14 defeat to Southern Illinois. North Dakota State will face Eastern Washington in the first round. No. 2 Sam Houston will face Monmouth on Saturday, while No. 3 James Madison takes on VMI.

Nomadland heavy favorite for Best Picture at the Oscars

Delayed several weeks by the COVID-19 pandemic, the Academy Awards will be held in April for the first time in more than three decades. The Academy Awards, more commonly known as The Oscars, last took place in April in 1988, when the ceremonies were postponed several weeks due to a strike by the Writers Guild of America. “Nomadland,” a film starring Frances McDormand and David Strathairn, enters Sunday’s broadcast as the decisive favorite (-670). The movie documents the travails of a widow who decides to travel the country after a succession of traumatic events, including the death of her husband and the loss of her longtime job at a gypsum plant. McDormand, a two-time Academy Award winner for Best Actress, is the third choice at DraftKings, with odds of +350. Carey Mulligan, an English actress who starred in the black comedy thriller Promising Young Woman, is favored at +150. The second choice is Viola Davis (+180) for her role in “Ma Rainey’s Black Bottom.” After winning Best Motion Picture — Drama and Best Director at the Golden Globe Awards, “Nomadland” received six nominations at the Oscars. Two states, New Jersey and Indiana offered betting lines on the Oscars in 2020. This year, those states will be joined by a third, Michigan.