Despite missing Wimbledon, Andrey Rublev is still ranked No. 8 in the ATP World Tour rankings, three below his career-high of fifth in 2021. Wimbledon officials prohibited Rublev and fellow Russian player Daniil Medvedev from entering the draw due to the ongoing military conflict in Ukraine. As the U.S. summer hardcourt season heats up, Rublev will try to regain momentum at the Citi Open in Washington, D.C.

Rublev, the tournament’s top seed, has a bye into the second round, where he will face the winner of the Round of 64 match between Stefan Kozlov and Jack Draper. At BetMGM, Rublev opened as the tournament favorite with odds of +650. Rublev is on the same side of the draw with Taylor Fritz and Denis Shapovalov, who have odds of +800 and +1600, respectively. Alex DeMinaur, who won the Atlanta Open on Sunday over Jenson Brooksby, is also in the top half of the draw. Both DeMinaur and Brooksby have odds of +1400 at BetMGM.

Wimbledon runner-up Nick Kyrgios is the second choice at +750, followed by Hubert Hurkacz and Fritz at +800. The Citi Open is the final tournament on the ATP Tour before next week’s National Bank Open presented by Rogers, a key tuneup for the U.S. Open.

Baltimore-based Bingo World is the largest bingo hall in Maryland and offers one of the largest bingo jackpots in the Mid-Atlantic region, according to the company’s website. On Monday, Bingo World President Randy Clemens and several Maryland politicians will attend a ribbon-cutting ceremony for the opening of the BetRivers Sportsbook at Bingo World, the first Maryland retail sportsbook outside of a casino.

The 3,000-square-foot retail sportsbook will feature a lounge with 32 theater-style seats, a bar with seating and high tops, and 21 high-definition video screens, Rush Street Interactive stated in a press release. Former Baltimore Ravens wide receiver Qadry Ismail is expected to place the first wager inside Bingo World. Ismail caught a 44-yard reception in Super Bowl XXXV to help the Ravens’ 34-7 win over the Giants.

“This new sportsbook is a huge win for avid sports fans in Baltimore and beyond,” Ismail said in a statement. “Betting has become such a big part of the sports world, and now Ravens fans and other bettors can come here to be entertained and enjoy the wide variety of betting options BetRivers will offer.

Washington Nationals General Manager Mike Rizzo is expected to field a flurry of calls this week in the final hours before Major League Baseball‘s trade deadline on Tuesday. Why? Because star outfielder Juan Soto could depart the nation’s capital after he reportedly turned down a 15-year, $440 million contract earlier this summer.

Soto, 23, is commanding interest from multiple World Series contenders. According to CBS Sports, three teams remain in the running to acquire Soto: the Cardinals, Padres, and Dodgers.

This year has put the dead in deadline. Last year, it was slow, too. And then there were 36 trades in the last 48 hours.

At ESPN+, a look at the fulcrum of the deadline, Juan Soto, and how the tentacles of those talks helped grind the market to a halt: https://t.co/pTH3SPVuZQ pic.twitter.com/dNX1ximsl2

At the same time, the Mets, Astros, and Padres are among the teams that have been rumored to have interest in Cubs catcher Wilson Contreras, a free agent at season’s end.

Ohio continues to ramp up for its highly anticipated launch of legal sports betting on Jan. 1, 2023. Upon launch, Ohio will become the largest state to go live with sports wagering since New York last January. On Wednesday, the Ohio Casino Control Commission (OCCC) will meet for the first of two scheduled meetings during the month of August.

The meeting will be the last before an application window for Type-C sports gaming hosts expires on Aug. 15. Type-C gaming hosts are designated in Ohio as bars or taverns that wish to offer sports gaming through a self-service kiosk. The kiosks, managed by the state lottery, will cap withdrawals at $700 per week. Following Wednesday’s meeting, the OCCC is scheduled to meet again on Aug. 17.

The NFL preseason kicks off on Thursday night when the Las Vegas Raiders face the Jacksonville Jaguars in the annual Pro Football Hall of Fame Game in Canton, Ohio. While neither squad is expected to play their first-stringers for long, both are starting fresh under new coaches. FanDuel has set the Jaguars’ regular-season win total at 6.5 (over +115/under -135), which is two less than the Raiders’ projected total of 8.5 victories.

Jaguars running back Travis Etienne could receive some snaps on Thursday after missing his entire rookie season with a foot injury. For the moment, Etienne is listed as the starter on the Jaguars’ depth chart. Eventually, Etienne may split carries with James Robinson, who is recovering from a torn Achilles late in the 2021 season.

A prop at DraftKings set the total on Etienne’s combined rushing and receiving yards at 1,025 yards. Robinson finished with 1,414 combined yards last season in 14 games.

The Jaguars spent huge in free agency, but their biggest offensive addition this year could be the debut of Travis Etienne, Jr. pic.twitter.com/unNbdGb7AP

The Hall of Fame Game could also mark the Raiders debut of All-Pro wideout Davante Adams, although the team has not indicated if he will play on Thursday. FanDuel lists the total on Adams’ 2022 regular-season yardage at 1,200.5 (over -112/under -112). Adams also has odds of 14/1 to lead the league in receiving yards, while three other wideouts — Justin Jefferson (+900), Cooper Kupp (+1000), and Ja’Marr Chase (+1200) — are expected to finish with more receiving yards on the season, according to FanDuel.

A busy week of financial reporting in the gambling space concludes Friday when DraftKings reports earnings for the three-month period ended June 30. Prior to DraftKings’ earnings call on Friday, MGM Resorts, Caesars Entertainment, and Penn National Gaming are among the top gaming companies that will report earnings this week.

DraftKings is expected to report a second-quarter loss of $0.87 per share, according to Zacks consensus estimate, which would represent a year-over-year decline of 14.5% from the same period in 2021. The company is also projected to generate second-quarter revenue of $438.2 million for the three-month period, an increase of 47.3% from last year’s second quarter.

As with numerous other sports betting-focused companies, DraftKings is under pressure to produce strong earnings figures after its stock price has slid more than 60% over the last 12 months. DraftKings traded around $48 a share last August in the days leading up to its second-quarter earnings call.

Life Is Good, Olympiad expected to clash in The Whitney

A 4-year-old son of Into Mischief, Life Is Good is coming off a five-length win in the Grade 2 John A. Nerud Stakes on July 2 at Belmont. Life Is Good notched a resounding 4 1/2 length win over reigning Horse of the Year Knicks Go in the Pegasus World Cup, but then inexplicably faded to fourth at the Dubai World Cup in March.

The poor final furlong in Dubai revived skepticism about whether Life Is Good has the stamina to handle distances beyond a mile. At Saratoga, he will be challenged in the nine-furlong race by Olympiad, the winner of last month’s Grade 2 Stephen Foster Stakes. Olympiad, who recorded a career-high 123 Equibase speed figure in the Stephen Foster, is five-for-five in 2022. The field will also receive a boost if trainer Doug O’Neill enters Hot Rod Charlie, last year’s runner-up in the Belmont Stakes.

Besides Life Is Good, Pletcher will enter reigning Cigar Mile winner Americanrevolution and Happy Saver, the 2020 winner of The Jockey Club Gold Cup. The winner of The Whitney, one of the most prestigious races each year for older horses, will receive an automatic berth into the Breeders’ Cup Classic.

The English Premier League begins earlier than normal due to the league’s upcoming seven-week break for the World Cup. On Sunday, Manchester City opens its title defense on the road in London against West Ham United.

In May, Man City edged Liverpool by one point for its fourth Premier League crown in five years. The English rivals distinguished themselves from the rest of the league, as Liverpool finished 18 points ahead of third-place Chelsea.

Following the signing of star Norwegian forward Erling Haaland, Manchester City is the clear favorite to win the Premier League title again. At PointsBet, Man City has odds of -150 to win the premiership, far ahead of second-choice Liverpool (+250). The two powers are the only teams with single-digit odds in the futures market. 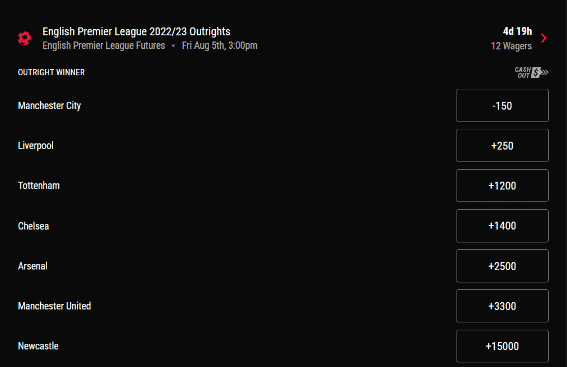