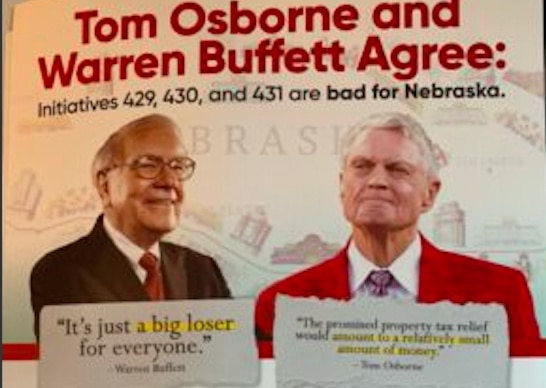 Nebraska voters will have a chance on Tuesday to expand gaming, including adding legal sports betting, but if they do so, they’ll be going against the state’s two most well-known personalities — billionaire Warren Buffett and legendary Nebraska football coach Tom Osborne.

The pair are prominently featured on a mailer landing in Nebraskans’ mailboxes ahead of Nov. 3. According to the flier, which features photos of both Buffett and Osborne, Buffett refers to the trio of referendums as “a big loser for everyone,” while under Osborne’s photo he’s quoted as saying, “The promised property tax relief would amount to relatively small amount of money.” Proponents of legal gaming are earmarking revenue to mitigate property taxes in the state.

The mailer has caused quite the kerfuffle. According to Omaha.com, Buffett says that while he is staunchly opposed to expanding legal gaming, the mailer is “racist” because of the use of the phrase “Indian gaming” — a term commonly used in the gaming industry by both tribes and those referring to tribes.

“I would never have approved my name and photo being associated with an ad so worded,” Omaha.com quoted Buffett as saying.

Tribes OK with ‘Indian gaming,’ but don’t want to be bad guys

Buffett’s comments appear to signal a bit of a disconnect. Within the gaming industry, tribal casinos are often referred to as “Indian casinos,” “Indian gaming,” or “Indian country.” A tribal source told Sports Handle that the community has no issue with the use of the  phrase “Indian gaming,” but went on to say, “It isn’t about Indian gaming or Indian casino, it’s about being made the boogeyman.”

Osborne has long been on record as opposing an expansion of gaming in his home state, and in early October he told the Journal Star that that more legal gaming would “certainly damage the quality of living in Nebraska [and] the people who would bear the biggest burden would be families of those with gambling problems.”

“Any Nebraskan is fully entitled to oppose casinos if they choose, but a current effort, backed by Gov. Pete Ricketts, to frame the ballot issues as being about unlimited tribal gaming is unwarranted fearmongering.” https://t.co/IoOrWN2ClL

The ballot initiatives are a trio of constitutional amendments, all of which must pass to legalize “all forms of games of chance,” which ultimately could be interpreted to include retail casino-style gaming, including sports wagering, and down the road, possibly digital gaming. Proponents and opponents are doing their best to play on voters’ emotions — those in favor are lobbying under the banner “Keep the Money in Nebraska” and those opposed call their group “Gambling With the Good Life,” a play on the state’s motto of “The Good Life.”

Gov. Pete Ricketts and four former governors also oppose the measures, which could result in the biggest expansion of gaming in Nebraska history. The Winnebago Tribe, which owns and operates several casinos in the state, and the Nebraska Horsemen’s Benevolent and Protective Association are the key proponents.  “Keep the Money in Nebraska” has reportedly already spent about $4.3 million.

Sports betting is legal in Colorado to the southwest and Iowa to the east. Both offer retail and statewide digital options for sports betting. Sports wagering could be made legal in Deadwood, S.D., on election day, and a Wyoming tribe earlier this month announced it will offer sports betting ahead of the 2021 Super Bowl. In Nebraska’s two remaining border states, Kansas and Missouri, lawmakers have been discussing legalization for several years.