Kentucky’s sports betting working group isn’t working in a vacuum. During its first meeting on Monday, the nine-member panel took time to review what’s been going on from Mississippi to Pennsylvania and all points in between.

“We broadly discussed how sports wagering legislation has developed across the country and how we envision it take shape here in Kentucky,” Senator Julian M. Carroll told Sports Handle via e-mail. “My priority has been and remains to protect Kentuckians by regulating sports wagering and generating new revenue for Kentucky’s ailing pension systems.”

Kentucky badly needs additional revenue to rescue its pension systems and lawmakers have made no secret that that is the driving force behind exploring sports betting. Carroll, a former Kentucky governor, has been leading the charge and in June pre-filed a bill that he hopes will ultimately be the framework for the legalization of Kentucky sports betting.

Kentucky has Plenty of Sports Betting Ideas to Study as Three States Have Rolled Out Sports Betting in the Last Three Months and One More has Made it Legal.

There’s plenty for Bluegrass State lawmakers to consider: in the three months since the Supreme Court struck down the Professional and Amateur Sports Protection Act, Delaware, New Jersey and Mississippi have all rolled out sports betting, and Rhode Island has legalized it and is making preparations for launch. West Virginia legalized in March (pending SCOTUS) and after setting regulations, will see the Hollywood Casino in Charles Town take the state’s first legal wager before Sept. 1. And Pennsylvania has been working on sports betting regulations to implement its framework.

But before state lawmakers can vote on anything, they must first come to a consensus on what sports betting in Kentucky will look like. Monday’s meeting at in Frankfort was the first step in bringing varying opinions together. The working group including nine lawmakers from both chambers and both political parties:

Of the nine, Carroll, Sims and Schamore have all filed sports betting bills, but none have gotten past committee. Carroll’s bill puts its focus on Kentucky’s horse racing industry and calls for sports betting at the state’s racetracks and OTB parlors. It allows for a 20 percent tax on handle, though, which will guarantee the kind of reaction from potential operators as in Pennsylvania, where a 36 percent tax on gross revenue has a caused a bit of a standoff with operators claiming they cannot make any money in such an environment.

Carroll told Sports Handle earlier this summer that the decision to tax handle was made because it mirrors the current Kentucky tax structure for pari-mutuel wagering.

Two Bluegrass State Sports Betting Bills Are Floating Around the State Legislature, But They Have Different Frameworks.

The house bill casts a wider net, calls for the state lottery commission to oversee sports betting and would allow for sport wagering at retail lottery outlets, as well.

Kentucky is not currently home to any full-fledged commercial casinos, but there are nine horse-racing venues, including the famed Churchill Downs, as well as off-track betting parlors. Given that the initial proposed legislation comes at sports betting from different directions, the working group has much to discuss in the coming months.

“The working group will continue these discussions in future meetings to discuss details on the appropriate agency to administer sports wagering, the venues that may offer sports wagering, and the optimal tax rate to generate the most revenue for Kentucky,” Carroll said.

It’s likely that one of the easier issues to settle will be mobile betting and deposits, Carroll said, as the state already allows for both in pari-mutuel wagering.

The next working group meeting has been set for Aug. 22.

Kentucky Sports Betting Bill Will Be Revived In 2022, But Even Supporters Are Pessimistic 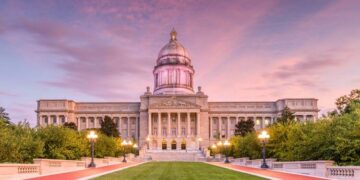 Will 2022 Be Kentucky’s Year To Allow Legal Sports Betting?