Wondering if this is harmless or crosses the blue line 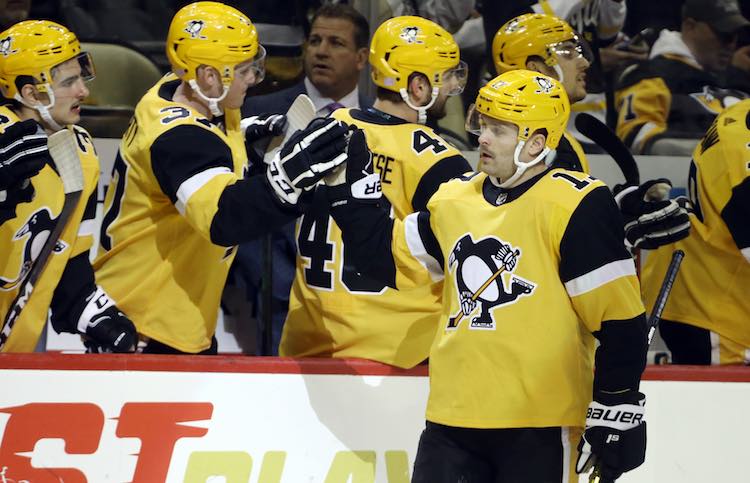 If you have whiplash from the 180-degree turn certain pro sports leagues have taken with respect to sports gambling in the past 18 months post-PASPA, well there’s lots of company in that Wowza Winnebago.

The latest league-sanctioned trip on the sports betting highway involves the NHL’s Pittsburgh Penguins, which of course hail from a state, Pennsylvania, where sports betting is now legal. Here’s the Tweet that was brought to my attention on Monday in a column by Bill Brink of the Pittsburgh Post-Gazette:

Bryan Rust has been on a hot streak since he returned to the lineup, earning 4G + 2A in five games.

Will he earn over or under 2.5 points in today's game against Chicago?

Want to play for real? Visit https://t.co/U4nN34JDfJ or @BetRiversPA to put your money where your mouth is.

For anyone just emerging from an 18-month hibernation, such a suggestion from the social media arm of an actual NHL franchise would be quite stunning. Here’s a similar, earlier Tweet from the Penguins’ account with equal encouragement for a real-money wager with the team’s official sportsbook partner:

Will his save percentage tonight be OVER or UNDER that tonight against the Jets?

Have any hot takes about tonight's game? Visit https://t.co/U4nN351eEj to play for real.

“I think that when somebody loses a bet, they tend to sometimes confuse their motives in rooting and enjoying the game because if you lose your bet, even though the team you’re rooting for wins, you have a potentially conflicted outcome.”

The voice of that remark is NHL Commissioner Gary Bettman in a 2012 deposition, in which the NHL and other sports leagues sought to enforce through the courts the now-defunct federal ban on sports wagering.

Here’s Bettman in March 2019 at a conference:

“Times have changed. The concerns we had at 10,000 feet had nothing to do with the integrity of the game. It had to do with atmospherics and the like, and the practical element as to how this was all going to work. Once the Supreme Court ruled, we got to get with the program. And frankly, as a practical matter, I owed it to our fans, I owed it to our clubs, to embrace the evolving world, whether it’s sports betting or changes in technology. In this day and age, you either evolve or become extinct.”

And now as a practical element as to how this was all going to work, we’re going to see more league and gambling entity partnerships, and team and sportsbook partnerships as seen on the Penguins’ feed. Bill Brink in his story reviews the growing number of such arrangements, among them the New Jersey Devils’ partnership with bookmaker William Hill, which led to the introduction of the William Hill Sports Lounge at the Prudential Center in Newark.  There’s no betting counter inside the Devils’ home arena, but it’s a brand building and app-downloading endeavor.

But back to the Penguins tweet, it makes me ask, has the team and the NHL gotten drunk amid the engagement evolution?

I know that my 13-year-old brother-in-law, a die-hard Penguins fan and freshman hockey player in northern New Jersey, subscribes to the Penguins’ social media feeds.

Yes, here I’m asking, What about the children? The guy who covers sports wagering for a living and promotes it (enjoyed responsibly).

Is this really any different from a Bud Light advertisement during a football broadcast? I don’t know. We can debate that. The makers of Bud Light entertain all audiences in Super Bowl commercials, and other beer commercials glamorize drinking, meanwhile the FCC banned cigarette advertisements back in 1971.

The video game industry is currently facing a scientific reckoning in connection with in-game rewards known as “loot boxes,” which researchers have found problematic in some people, as it fosters the kind of addictive behaviors more commonly associated with problem gamblers seen at casinos, for example. Lawmakers in the U.K. are moving toward classifying loot boxes — a very lucrative feature for video game makers — as gambling and thus subject them to regulation.

Is underage gambling any more sinister than underage drinking or cigarette smoking or flavored vaping? What degree and scope of encouragement of an age-restricted activity is too much?

Don’t know that either. But we — and teams and leagues — should think about it.