Mickelson Admits To Past ‘Reckless And Embarrassing’ Gambling Addiction

Golfer emerges from hiatus to play in Saudi-backed tourney 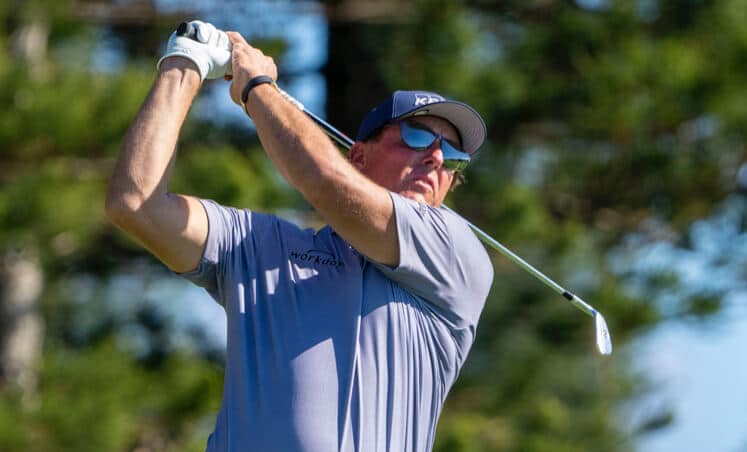 It’s no secret that Phil Mickelson has long enjoyed a good wager, both on and off the golf course. In a recent interview with US Bets, the PGA star’s biographer, Alan Shipnuck, said of Lefty’s propensity for betting, “It’s definitely part of his brand. It’s the way he plays the game. It’s the way he lives his life. He likes the action. He likes energy. He likes high stakes.”

But there have long been rumblings — some of which were recounted in Shipnuck’s book — that Mickelson’s gambling was out of control. And in an interview published Monday by Sports Illustrated, Mickelson admitted as much.

“My gambling got to a point of being reckless and embarrassing,” he said. “I had to address it. And I’ve been addressing it for a number of years. And for hundreds of hours of therapy. I feel good where I’m at there. My family and I are and have been financially secure for some time.

“Gambling has been part of my life ever since I can remember. But about a decade ago is when I would say it became reckless. It’s embarrassing. I don’t like that people know. The fact is I’ve been dealing with it for some time. Amy (Mickelson’s wife) has been very supportive of it and with me and the process. We’re at [a] place after many years where I feel comfortable with where that is.”

Action at least as important as titles

In his book, Shipnuck reported that Mickelson may have loved betting on the course more than he valued winning actual tournaments (he’s won 45 PGA tourneys, including six majors), often seeking out money games with peers to ramp up the intensity of a casual round.

“He likes to try and pull off crazy things against all odds,” Shipnuck told US Bets. “That’s just who he is.”

Mickelson reportedly went so far as to wager with CBS announcer Gary McCord during tournaments, creating a special code of communication to signal what was at stake to the broadcast tower.

“Every time Phil got to my hole, Bones (Mickelson’s caddy) would look up at me and I would flash the odds,” McCord told Shipnuck. “If Phil had a 15-footer, I’d flash three fingers, which meant the odds were three-to-one. If he was 60 feet, I’d give him two-to-one on a two-putt. Bones would go down and whisper in his ear and Phil would look up at me and shake his head yes or no. I can’t tell you how many wadded-up twenties I threw out of the tower until the Tour found about it and I got word through CBS I was no longer allowed to gamble with Phil while up in the tower.”

In his interview with SI, Mickelson explained his affinity for on-course action, but said it was more than that.

“On the golf course, it’s creating competition,” he said. “But it’s the anxiety, the other things that come across with gambling off the course and addiction off the course that I really needed to address.”

Not a threat to financial security

One anecdote from Shipnuck’s book illustrated the extent of Mickelson’s off-course betting, which helped contribute to reported gambling losses of more than $40 million from 2010-2014. Mickelson reportedly took a group of friends to Vegas to wager on a slate of NFL games and “swept every morning game,” according to former Major League Baseball pitcher Tom Candiotti, who was along for the ride.

By Candiotti’s estimation, at that point Mickelson was “up over a million dollars” and padded his winnings with a successful afternoon. But instead of pocketing his handsome sports betting profit, Mickelson “gave a lot back at baccarat,” said Candiotti, who added that “we practically needed a lasso to get him out of” the casino and onto a plane back home.

This sort of behavior led many, including Shipnuck, to speculate that Mickelson’s decision to play in the Saudi-backed LIV Invitational Series, a PGA rival which will hold its first tournament in London this week, was financially motivated.

But Mickelson told SI that wasn’t the case, insisting, “It isn’t a threat to me or my financial security. It was just a number of poor decisions.”

When asked what the last four months — which he’s spent away from golf and out of the spotlight — have been like, Mickelson told SI, “It’s been a tremendous opportunity for me to spend time with Amy and loved ones that I’ve never really had this opportunity to do in my life. I’ve been able to be much more present and engaged when I’m with the people I love. I feel much more health and at peace. I’ve spent a lot of time doing therapy and dealing with issues that I have. But I’ve come away with a balance in my life and a renewed excitement and energy to get back to playing golf.”