by Greg Warren
in Industry, Regulation 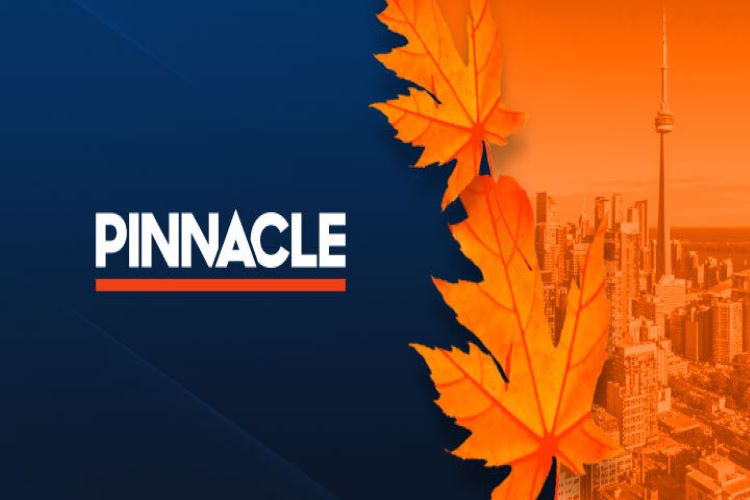 Pinnacle, an iGaming and sports betting operator with over 20 years of experience dealing with customers from over 100 countries, officially went live in Ontario‘s regulated market on Wednesday.

Pinnacle.ca launched with just sports and esports betting offerings. Casino gaming will be available on the site in January, and there aren’t apps available for download on Android or iOS in Ontario yet.

Known for its high betting limits and low-margin odds, the operator also calls itself the pioneer of esports betting, which it has offered since 2010 on its platforms.

After operating across Canada and in Ontario in the gray space for over two decades, Pinnacle received its iGaming license from the Alcohol and Gaming Commission of Ontario in September. Existing gray market operators have until Oct. 31 to join Ontario’s regulated market, or they must shutter operations in the province until they’re licensed.

“We want to give our customers a true and unique betting experience, showcasing to them what sports betting can and should look like,” Pinnacle CEO Paris Smith said in announcing the launch. “At Pinnacle.ca, that means great odds on the sports Ontario bettors care about, a strong focus on responsible gambling, and the welcoming of both recreational customers and the sharpest professionals around.”

Ontario is Pinnacle’s first gaming license in a regulated North American jurisdiction. Like other previously gray operators to join Ontario’s regulated market, such as bet365 and Betway, Pinnacle needed to settle all bets with its existing Ontario customers prior to launch. Pending futures bets with a settlement date of Oct. 26 or later were canceled and stakes were refunded to Ontario customers.

To complete the migration to the regulated site, customers also had to resubmit their KYC documents and download the GeoComply app.

GeoComply, a British Columbia-based company, is a third-party location service provider that provides cybersecurity solutions to detect location fraud and verify a user’s true identity. Operators are required to ensure Ontario players are geofenced within the province as part of the AGCO’s regulations.

In June, Pinnacle hired veteran sports betting executive Steven Rapp as its new country manager for Canadian operations. Rapp, who previously worked in various roles with Bowmans, bet365, and Sports Interaction, is also a well-known radio personality in Canada for his Inside the Lines gambling show that aired for over 20 years on the Sportsnet Radio Network.

“I started with Bowmans, I spent seven years bringing the bet365 brand to Ontario, then I spent seven years with the Sports Interaction brand,” Rapp told Sports Handle. “Now I’m 60, and my career is coming to an end soon. My plan was not to keep going. I’ve got five grandchildren to keep me busy, but it was the Pinnacle brand that came calling. To end my career bringing an iconic brand like this to the regulated market where I live, and where I’ve been working in the gray for 20 years, it just felt like a great way for me to finish. There’s no other brand I can think of that could’ve enticed me to keep going.”

Rapp said the Ontario launch went well Wednesday, aside from a “few bugs here and there” and that nothing has happened that Pinnacle “didn’t foresee or couldn’t fix” quickly.

The sportsbook touts industry-leading odds and high bet limits as main components of its entrance strategy to the market.

“Pinnacle is able to offer those low margins because they’ve been doing it for so long and they’ve perfected it,” he said. “They know how to use sharp action to sharpen their lines. They’re not afraid to take a bet. Winners are welcome, they aren’t going to kick people out. High limits, and any limits, will be visible on your screen and transparent. When you press that button and enter that bet, you’re going to get that number. You won’t get the spinning wheel and have the bet kicked back to you.”

Like all of the operators now live in the Ontario market, Pinnacle hopes to entice new sports bettors to sign up for accounts, but it also believes it can win over seasoned and sharp bettors with its product.

“The Pinnacle brand is going to resonate with people and bettors that have been around this business for 10 or 15 years that know the value, know the brand,” Rapp continued. “My job is to teach those newbies to the Ontario market about the value.

“I’ve always said, ‘Everyone else is going after new customers.’ Now, I’m going to go after their customers that have gone through the growing pains of seeing what it’s like to be kicked out for winning a couple bets, that have seen what it’s like to put in a $10 three-team parlay and be told you can only put $3 on it. I think by entering the market later, we’ve seen and taken a good look at what the pain points have been for people, and we have a good running start to address them.”

Have you heard, the sharpest book on the planet launches in Ontario next Wed Oct. 26th. Ontario players will now get to see what professional bettors have known for years. You will not find better betting value than Pinnacles reduced margins, high limits approach. #Pinnacle

Sportsbooks advertisements have taken over professional sports broadcasts in Canada and Ontario since the launch of the regulated market on April 4, but Pinnacle won’t be rolling out a huge advertising blitz now that it’s regulated in the province.

“We have a differentiator that the others don’t have,” Rapp said. “We don’t have John Stamos and the Beach Boys, or Jamie Foxx and Wayne Gretzky. What we have is education and information. Pinnacle is known for putting out a lot of content, a lot of sharp content. The new bettors out there especially want to consume good content. We want to be the educational book. No bells or whistles — just good value on odds every single day, and we want to teach you to be a better bettor.”

Pinnacle does have the luxury of an existing user database in Ontario, an advantage that newcomers to the market like BetRivers and PointsBet, among others, didn’t have upon their launches in April.

“The big competition is pretty obvious out there. DraftKings, bet365, FanDuel, BetRivers — the guys that are spending millions of dollars on ads,” Rapp explained. “You won’t see that from us. Our launch plan doesn’t include spending that amount of money on marketing. We’ll spend it smartly. I’ve been around for 22 years, I’ve made some contacts, I think I know some good places to go, I think I know where the players are. I’ll do it on a proper budget.”

Ontario’s regulators have said up to 70 operators could be up and running in the province by the end of the year. Currently, there are just over 40 live regulated iGaming sites in Ontario, but with so much competition expected in the space, there’s a good chance some might not last.

“Will there be some consolidation in the market? Sure, we’ve seen it in the United States already,” Rapp said. “The big guys — DraftKings, FanDuel, PokerStars, bet365 — those guys will survive. I don’t know how some of the smaller entrants are going to fare. It’s the gambling business. You make it on small margins, and you don’t need a lot of customers. If you spend your money right and you book it right, you can survive.”

Pinnacle’s launch comes roughly a month before the FIFA World Cup, a betting event which Rapp says has massive potential in Canada. The men’s national team has qualified for the event for the first time since 1986, ending a 36-year drought.

“In all my years doing this in Canada, soccer has never been a sport that has been been bet on heavily. I’ll be pleasantly surprised if it is everything we think it might be. We have nothing in Canada to compare it to. There has never been a soccer event in Canada that will generate the interest this World Cup will. We’ll put out the best odds and hopefully we’ll get people to come our way. One thing Pinnacle can do is soccer.”

A look at their odds:

Ontario is the only Canadian province that has adopted an open iGaming and sports betting model, but other provinces are watching the market closely. With over $6 billion in online wagers made and $267 million in total gaming revenue reported in Q2, other provincial governments are missing out on valuable tax revenue.

Rapp says that if other provinces choose to regulate, Pinnacle will also be interested in joining those markets. For now, however, Pinnacle is still operating in the gray space in taking wagers from Canadians in every other province across the country besides Ontario.