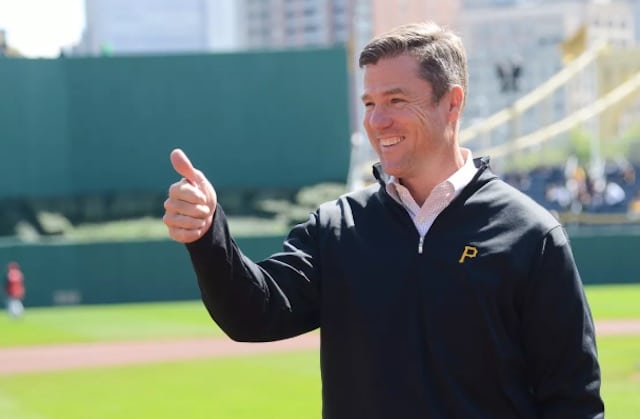 The near-consensus among state lawmakers is that Major League Baseball’s and the National Basketball Association’s desire for a direct cut of sports betting revenue should go unfulfilled. League representatives have largely been met with skepticism if not outright hostility at many state hearings this year.

The leagues have rooted their justification for a “betting right” or “integrity fee” — one percent (or any percent) off the top — in a flawed intellectual property argument and, ultimately, what amounts to a request.

But last week the Pittsburgh Pirates, in response to a call for comment from the Pennsylvania Gaming Control Board regarding the state’s temporary sports wagering regulations, put forth a bold new claim for sports betting revenue from state licensees: they want sports betting revenue earmarked to support the upkeep and capital improvements of PNC Park, home of the Pirates.

Writes Frank Coonelly, President of the Pittsburgh Pirates (full statement here) in a letter to the Pennsylvania Gaming Control Board:

“Without professional sports there can be no professional sports betting. Providing a professional sports product is a costly endeavor. While our landlord is responsible for capital repairs and improvements at PNC Park, the Pirates are responsible for maintenance and operational expenses at PNC Park, which has been named the premier ballpark in the country since its opening in 2001. The capital needs at PNC Park are significant and unfortunately are much higher than the current funds allocated to them by our landlord. We have been engaged in constant dialogue over the past five to seven years with city, county and state officials about the need to allocate a funding source to the capital needs of PNC Park.

“It stands to reason that a portion of the revenue collected from sports wagering should be allocated to the maintenance and upkeep of PNC Park and other sports-based facilities in Pennsylvania which provides for sports wagering in the first place. We are concerned that no such provision is included in the current law or the Regulation.”

This whopper — an additional meter past anything MLB officials have stated on record — came after Coonelly ticked through the standard MLB talking points that legal sports betting imposes severe integrity risks to each team. Also implicit in the letter is a threat that the city, county and state should provide the Pittsburgh Pirates with additional taxpayer funds to support the privately owned entity. Or else.

Also note that in the full letter, Coonelly refers multiple times to an “integrity fee”™, which the leagues have attempted to disclaim in favor of “betting rights and integrity fee.”

[Also see: A Timeline of the Leagues’ Fight For A Sports Betting ‘Integrity Fee’]

The furthest an MLB official has gone in conceding that a sports betting fee would represent purely revenue, occurred in May.

“We acknowledge that the fee is going to be more than our costs, so that revenue would go to our clubs just like any other revenue would,” MLB Senior Vice President and Deputy General Counsel, a fixture at state-level sports betting hearings, told The Athletic (subscription required).

MLB officials, as well as West Virginia Governor Jim Justice have argued that they want licensees — not states — to pay the leagues this cut, but that is simply a misdirection because less operator revenue means a reduction in state taxes as well as money to support vendors and employment of residents.

How Much Taxpayer Money Is Enough?

According to Watchdog.org, a non-profit organization “dedicated to the principles of transparency, accountability, and fiscal responsibility,” here is how many taxpayer dollars have already supported the Pittsburgh Pirates:

The Steelers play at Heinz Field, which opened in 2001 at a cost of $357 million, with the Steelers putting up $76 million and taxpayers put on the hook for $281 million. PNC Park also opened in 2001 for the Pirates at a cost of $262 million with state taxpayers picking up $75 million, regional taxpayers $137 million and the Pirates $50 million. The Pirates’ share was partially paid by the $30 million PNC Bank gave them for naming rights to the predominantly publicly financed stadium.

Those sums would dwarf what a cut of sports wagering would provide to any individual team if the pro leagues were able to shake down states, or push Congress (the prospect of which has further dimmed recently) to force state-licensed operators to pay the leagues a direct cut.

Which doesn’t change the fact that this Pirates statement represents a novel new grab at taxpayer dollars to support a private enterprise.