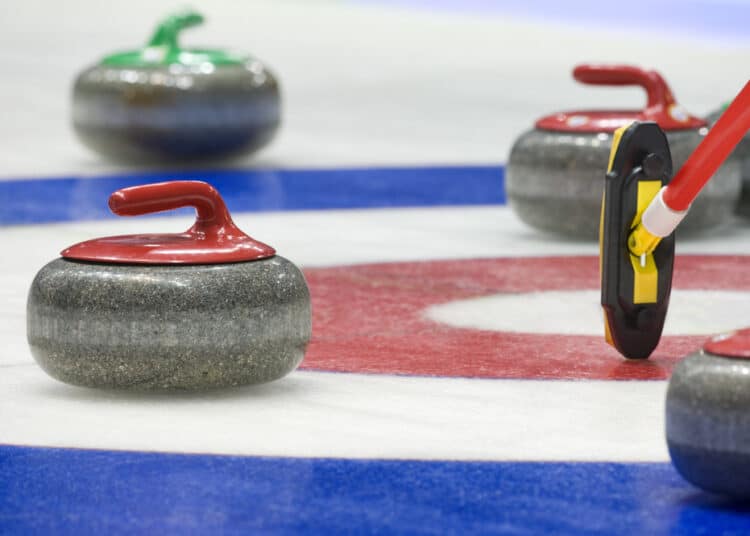 March Madness is one of the most popular events of the year for sports bettors. But this year, Canadians are being introduced to March Madness on ice.

Unlike your typical bonspiel, the PointsBet Invitational is a single-knockout tournament featuring 32 Canadian teams — 16 women’s and 16 men’s — that will be played in Fredericton, New Brunswick, from Wednesday through Sunday.  The first major competition of the curling season will also be the first ever single-elimination curling championship.

Not only can you bet on every aspect of this March Madness-style curling event, but fans are also being invited by PointsBet to participate in a free “Sweep 16 Bracket Challenge.” A grand prize of $1 million (CAD) will be awarded to the entry that correctly guesses the outcome of all 30 matches at the event. The contest is open to residents of Canada, excluding Quebec, and participants need to be 19 or older at the time of entry.

In order to boost your odds of winning the bracket challenge, we spoke to a few curling aficionados about how they’re handicapping this unique event. 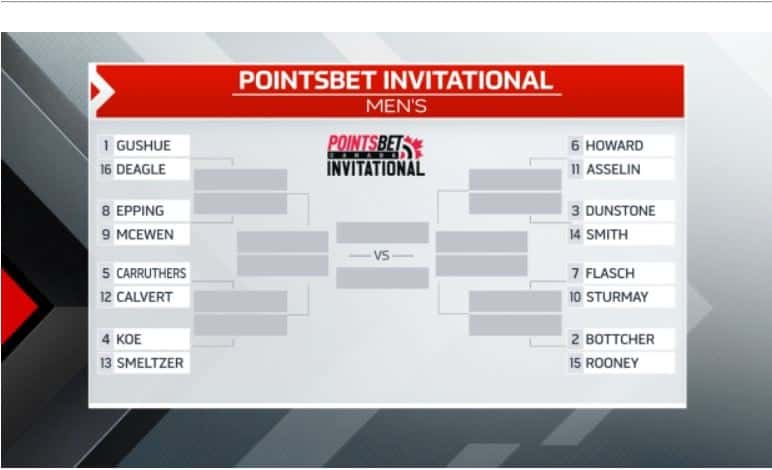 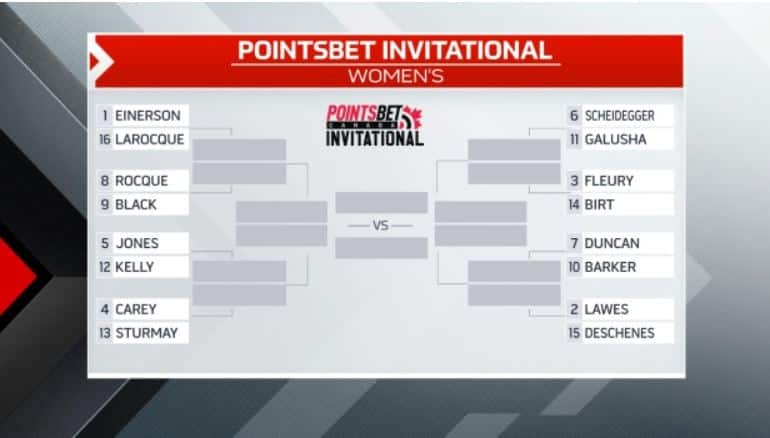 Mary Chilvers, one half of the 2 Girls and a Game curling podcast alongside co-host Lori Eddy, knows a thing or two about curling. Chilvers, Eddy, and their teammates were recently crowned the Ontario women’s senior champions and will be competing for the national senior championship in December.

Season 8 Opener will be released tomorrow around 1pm and you won’t want to miss it! HUGE news for @2GirlsAndAGame will be announced in the episode! 🥌🎙#curling pic.twitter.com/BFvRTr6Tr4

“When I heard about the format, I raised an eyebrow, mostly due to the fact that it’s a single knockout,” Chilvers said of the PointsBet tourney. “I don’t think that’s very desirable for any sport, for any team to go into a competition. After a two-hour game, they could be going home.”

“The tier-one teams, the very elite players, it was a no-brainer for them to say yes to this. They’ve all got a good chance of winning it. There are a lot of what I would call tier-two teams in this,” Chilvers noted, citing the inclusion of reigning Canadian junior champions, Canadian club champions, host committee-selected teams and a pair of fan-voted entries, in the event. “It’s going to whittle down to the top-level players, unless there’s an upset, but I don’t see that happening.”

When asked who she likes in each bracket, Chilvers said, “I see an Einarson, Jones, Fleury, and Lawes top four [on the women’s side]. But I think I have to go with Einarson. She’s the only team out of that top four that has the same four members still playing together. Jones is with a new team, Fleury/Homan is kind of a new team, and Kaitlyn Lawes is a new team.

“On the men’s side, I think it’s going to be Team Bottcher. He just won a competition. I was originally going to pick Brad Gushue, but he hasn’t been on the ice. He’s been practicing, but he hasn’t played an event yet.”

Though Chilvers doesn’t think an underdog will prevail in this tournament, she did point out one team that could surprise everyone on the women’s side as a No. 12 seed up against a No. 5.

“It would be Andrea Kelly from New Brunswick,” Chilvers said. “She did really well last year at the Scotties Tournament of Hearts. She kind of made a name for herself. They do have one new team member this year, but I don’t think that will disrupt them too much. I’m not saying she’s going to win it, but that would be my dark horse pick.”

In a recent article posted on the Curling Canada website, two-time men’s Olympic curling gold medalist John Morris also shared his picks for the women’s bracket. He’s siding with Team Einarson to win it all, but also pointed out Team Kelly as a dark horse.

“With Andrea, I think you can put her up there as one of the best shot-makers in Canada for women,” Morris said.

Kelly’s first-round matchup with 2014 Olympic champion Jennifer Jones is currently a pick’em (-115) at PointsBet, an indication that oddsmakers also see the potential for the 12th-seeded team to prevail.

So the pros are clearly siding with the favorites, but what about some advice from a purely betting perspective?

Kris Abbott is a veteran iGaming executive who also contributes to the Hammer Betting Network. The former Head of North America for Coolbet has been following curling for over 30 years, and he loves talking about betting on the sport.

“I think oddsmakers are going to give you the same odds that you’d get in any other event,” he said. “But it’s not any other event, is it? I’d be looking for underdog plays in the first round for sure. There’s not a whole lot of early underdogs that I’m liking on the men’s side, but I for sure would be interested in both Kerry Galusha (+115) and Suzanne Birt (+150) on the women’s side for their built-in familiarity within their respective teams and their combined histories of upsetting the big teams.”

So what advice would Abbott give to anyone filling out a curling bracket for the first time?

“I wouldn’t overthink it,” he replied. “It’s curious that it’s also so early in the season and teams are still getting to know each other. I know there’s been a ton of player movement [prior to the curling season], but I think I’d be looking to teams who already have the built-in familiarity. And, yeah, a bracket is a bracket, I guess. Take it game by game and give consideration to any matchups in your bracket that you think favor one team over another due to styles or tactics.”

Outside of potential upsets in the early rounds, Abbott also likes the prospects of the elite teams on both the men’s and women’s sides prevailing.

“I think the top half of the women’s draw is tough, so I’m going to go with Fleury/Homan in the bottom half of the draw,” he said. “I think they have an easier path to the final and if this team plays to its potential, they may win a lot in the next four years.

“On the men’s side, you can’t go against Brad Gushue. You just can’t. He’d probably be an underdog to the Bottcher Super Team in the final, which I would love. One caveat here is I don’t know how much the Gushue rink has been together this early in the year, given I know they took some downtime after a whirlwind 2021-22.”

Establishing a strategic partnership with Curling Canada and many of its teams has been a key part of PointsBet’s initiative, which has culminated with the creation of this unique curling event.

“From the outset of our partnership with Curling Canada, we have been committed to growing the game of curling,” said Nic Sulsky, chief commercial officer of PointsBet Canada, in a release. “To bring the next generation to the rink, we need to look at innovative ways to connect fans with the game. We know how much excitement is generated by March Madness bracket challenges and we hope to bring that same level of interest to the PointsBet Invitational.”

A major part of this week’s festivities in New Brunswick will be the pro-am event on Friday night, which will feature famous Jamaican-Canadian sprinter Donovan Bailey and several former NHL players, among other celebrities.

“Curling used to be considered quite stale,” Chilvers said. “I think there’s quite a bit of hype with this PointsBet Invitational coming up. I think it’s great for the fans and the curlers.”

Going to be bringing this speed to the ice alongside a stacked roster of players for the ⁦@PointsBetCanada⁩ Celebrity Invitational. Head to https://t.co/BRNijtzvr4 to join Curling’s first ever $1 million perfect bracket challenge. #Pointsbet #Curling #THEChamp pic.twitter.com/B0CTdaVxmk 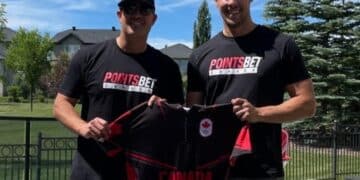