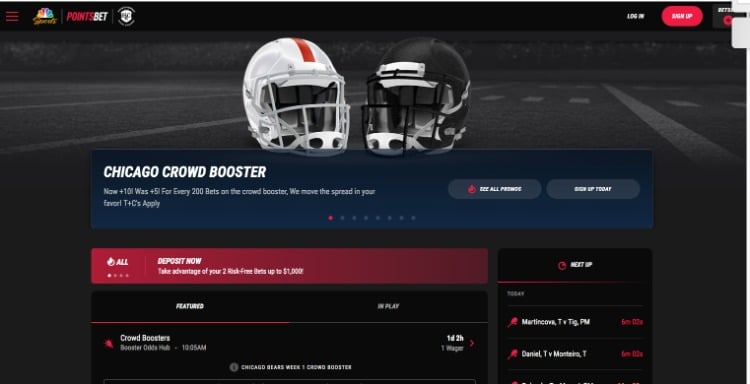 STICKNEY, Ill. – PointsBet became the fourth digital sportsbook to go live in Illinois on Saturday, after days of speculation that it would do so ahead of the NFL season. The company didn’t quite make the deadline — the NFL kicked off Thursday night — but did launch ahead of the first full Sunday slate of games.

But the Austrlalian-based company, which went live with Hawthorne Race Course – the first horse racing track to be granted a sports wagering license by the Illinois Gaming Board in July — clearly has its designs on being a big-time player in Chicago.

“The PointsBet team is excited to share that we are now officially live in Illinois, our fourth state of operation in the US,” said Johnny Aitken, PointsBet USA CEO, via press release. “The passionate sports fans in the state can now experience our leading online sports betting product and see for themselves why we’ve long stated that the best product experience will win.”

PointsBet joins BetRivers, DraftKings, and FanDuel as mobile sports betting options in the state. Illinois is the fifth state for PointsBet, which entered its agreement with Hawthorne Race Course in July 2019. It was already operating in New Jersey, Indiana, Iowa, and Colorado.

FanDuel opened its retail location just two days ago at Par-A-Dice Casino in East Peoria after launching its mobile app Aug. 28. While PointsBet did miss taking wagers in Illinois for Thursday night’s NFL season opener between the Kansas City Chiefs and Houston Texans, bettors in the state will have approximately 26 hours to make picks ahead of the Chicago Bears’ lid-lifter against the Detroit Lions on Sunday.

PointsBet’s entry completes a dizzying six-week stretch for Illinois sports bettors during which six retail sportsbooks and three mobile apps launched since Aug. 1. BetRivers (Rivers Casino) was the first to launch its retail sportsbook in March, shortly followed by Argosy Casino Alton right before the COVID-19 pandemic shuttered the nation.

Remote registration for mobile sports wagering is currently available in Illinois after Gov. JB Pritzker last month restored Executive Order 2020-41, originally issued in June. The Order suspends the in-person registration requirement that is part of the state’s sports betting law, which means patrons can now register from mobile devices or online rather than appearing in person at a retail location. The Order is in effect until at least Sept. 19.

When the Order was originally issued, BetRivers was the only digital book live, as it was the first to launch in mid-June.

Ideally, PointsBet would have preferred to launch its mobile app in Illinois, BUT if in-person registration is the only game in town, they are extremely well-positioned! pic.twitter.com/TyuhkjVv6q

Hawthorne Race Course is situated approximately 11 miles from downtown Chicago, and the only other sportsbooks within an hour’s drive of the city are Rivers Casino (BetRivers) in Des Plaines near O’Hare International Airport and Grand Victoria Casino (William Hill) in Elgin, which is approximately 40 miles west.

In addition to the track’s proximity to the downtown area, PointsBet is saturating the surrounding area with the three off-track betting facilities allotted by the gaming expansion bill. The OTB locations in Crestwood, Oakbrook Terrace, and Prospect Heights are all within 30 miles of “The Loop” in downtown Chicago, creating competition with Rivers and Grand Victoria as well as Ameristar Casino and Horseshoe Hammond just over the border in Indiana.

“PointsBet possesses competitive advantages by owning our technology environment from end to end, such as unrivaled speed and ease of use on a personalized platform,” Aitken said in a statement. “We, together with our partner Hawthorne Race Course, are thrilled to provide the Illinois consumer with exactly what they’ve been craving.”

A recreational bettor who bets their opinions in the NFL and likes to parlay their opinions would be wise to bet those opinions during @PointsBetUSA 0-vig NFL spreads on Saturdays.

Pointsbet is hitting the ground running for the NFL season, pledging to offer Illinois bettors the “best price in market for all Chicago Bears games this season for both pre-game spreadline and moneyline bet wagers.”

For the first three Bears games, PointsBet is offering a “Crowd Booster” promotion in which the Bears’ spread will be boosted five points for every 200 bets placed, and bettors will get the final spread number regardless of when a bet was placed. Saturday’s launch will also be the first of PointsBet’s “No juice Saturdays” in which all NFL spreadlines will be at even money (+100) for every Saturday in September.

PointsBet will have an immediate multimedia presence courtesy of its recent agreement with NBCUniversal, including “multiplatform game-day integrations” with NBC Sports Chicago, which is the regional broadcast home of the NHL Blackhawks, NBA Bulls, and MLB White Sox. That agreement also puts them in the marketplace with DraftKings, which recently announced plans to pursue a sportsbook at the Cubs’ Wrigley Field and will likely leverage the Marquee Network, the team’s flagship television network.

Having sports wagering is the first step in Hawthorne’s plan to grow into a full gambling destination. Hawthorne was deemed “preliminary suitable” by the Illinois Gaming Board when it received its sports wagering license with regard to its application to add casino games and become a racino – something that may be needed to keep horse racing viable in the state.

“There are a lot of good reasons why we chose to partner with PointsBet, but most importantly it’s their commitment to innovation and customer excitement,” Hawthorne President and CEO Tim Carey said via press release. “They truly know the passion and needs of the player and that has always been our focus in horse racing, just as it will be in the casino that we’re developing. Illinois gamblers are going to quickly realize PointsBet provides the best sports betting experience by far.”

Fairmount Park, which was long considered to be FanDuel’s first choice for a retail sportsbook, is still in the application process with the IGB. Arlington International Racecourse withdrew its sports wagering license application in August. Parent company Churchill Downs –- which is also a majority stakeholder in Rivers Casino — said during its most recently quarterly earnings report that it plans to sell the track, and it has not committed to live racing there beyond 2021.

Churchill Downs surprised many last year when it opted not to pursue a racino license, citing the high tax rates related to race purses. It is also partnering with Rush Street Interactive in a bid to build a casino in Waukegan, one of six sites approved in the gaming-expansion bill signed into law last year.