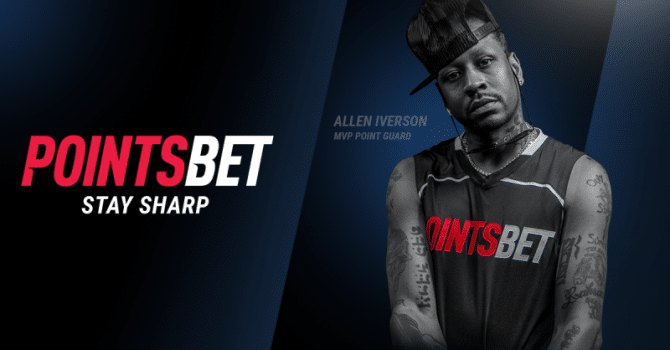 When logging on to PointsBet for the first time, a bettor may be surprised to learn that the site’s wide sampling of offerings bears closer resemblance to the options market than a traditional sportsbook.

With more than 500 markets through the company’s PointsBetting product, the unique prop bets can challenge the most seasoned gambler. Take for instance, this weekend’s menu for the NFL’s conference championships. Think you can predict the points accumulated by Drew Brees when his touchdown total is multiplied by his passing yards for the contest? If a total of 972 seems too low, a $1 wager on the over might provide value.

Suppose Brees connects on a 53-yard completion to Michael Thomas for a game-winning score and third of the day, upping his yardage to 373. That would boost his total to 1,119. Thomas’ catch sends the Saints to the Super Bowl and gives you a winning ticket of $147 (a spread victory of 147 units times a multiplier of 1).

But after an extensive officiating review, officials determine that Thomas fails to get both feet in bounds. The play is reversed, the Saints lose and Brees’ statistics are adjusted. Instead, Brees finishes with 320 yards and two touchdowns for a total of 640. Instead of beating the spread by 147 points, you lose by more than 300. Suddenly, your $147 win turns into a $332 defeat.

“It is betting on steroids,” said PointsBet CEO Johnny Aitken.

Spread betting is coming to New Jersey just in time for the most popular event on the sports calendar. On Thursday, PointsBet switched to live operations after completing their transition from soft launch to official launch in the app store. PointsBet is available on mobile and online platforms in the Garden State through its skin deal with The Meadowlands.

The concept rewards bettors who can spot market inefficiencies, along with those who can predict the margin of victory with pinpoint accuracy. Though few believed UMBC had a remote chance of pulling a historic upset against Virginia in the 2018 NCAA college basketball tournament, thousands took a chance that the Retrievers would cover a +20 spread. A confident UMBC fan could have doubled down.

The Retrievers not only eliminated the Cavaliers in the Round of 64 matchup, they did so with a resounding 74-54 win. Despite the lopsided result, a bettor with a traditional book would have made the same amount regardless if UMBC won by 1 or 20 ($100 on a $110 wager). A wager on PointsBet’s spread betting market, however, carries a win level of 40X.

Take the same $110 wager on UMBC +20. Had the bettor placed the wager with PointsBet, he would have won $4,455 ($110 stake times 40). When the Bills traveled to Minneapolis to take on the Vikings in late-September, a PointsBet customer bet $100 a point on the road underdogs. Defying the odds, the Bills stormed out to a 27-0 lead en route to a 21-point victory. At 100X, the bettor came away with a nice payday of $3,800. For bets rife with potential for volatility, most bettors stake a $1 or less on the spread market, Aitken said.

During beta testing, PointsBet received a good deal of activity with NBA bets on the time of a game’s first made 3-pointer. Typically, punters can wager on if the hoop will occur in under two minutes or over 140 seconds. The book wins in all instances where the basket falls in the middle. In recent weeks, Aitken received key feedback from professional gamblers with 30 years of betting experience.

“They had become quite emotionless to watching a sporting event, whereas the first time they tried spread betting they were suddenly watching the clock,” Aitken said. “They really felt that rush of excitement.”

Approximately 33 percent of PointsBet’s activity in New Jersey has come on its spread betting platform. By comparison, about 75 percent of the site’s activity in Australia occurs within its traditional, fixed odds marketplace.

The company generates a margin with its spread products of roughly ten times of that from its fixed ones in Australia, he added.

The approach from sharp bettors

Drawing on his experience from the Australian market, Aitken noted that a veteran player with deep pockets will tend to place bets with higher stakes, while a novice typically opts for lower limits. Even with some contests that offer maximum win-loss limits of 1,000X, a bettor can select a “stop loss” option that reduces their potential exposure. Though the maximum loss limit on the Vikings against the Bills may have been 250X, a bettor had the option of setting the stop loss function to somewhere around 12X. Instead of losing $3,800 on a $100 bet, the player would have dropped a less damaging $1,200. Conversely, the decision will also lower the ceiling on a customer’s potential winnings.

A New Jersey resident, nicknamed ‘Captain Jack’ on Twitter, is a popular and outspoken sharp bettor in sports gambling circles. During the testing phase, Captain Jack experimented with the spread betting product often. Thus far, he has recorded varying results.

On Dec. 21, he took the under on a prop featuring Kawhi Leonard. Punters accepting the bet were asked to predict whether a combination of Leonard’s points multiplied by rebounds multiplied by assists would fall under 1,000 units. The Raptors forward finished with 37 points and six rebounds, but tallied only one assist. Captain Jack beat the spread by 778 units and yielded $194.50 on a 25 cent wager.

For two NBA wagers on the overall point total, he came up on the losing end. ‘Jack’ took an Under of 228 in the Wizards’ 149-146 win over the Suns on Dec. 22, only to see the teams combine for 77 points in overtime. He also suffered a 79-point loss in the Spurs’ 154-147 win against the Thunder on Jan. 10 after he played the Under at 222. Both defeats were capped at 50X. When Captain Jack senses an edge in the market, he will not think twice of making a large wager especially with PointsBet.

“I know a lot of sharp players will find this to be an intriguing concept,” Captain Jack said. “They’re going to look to prove themselves as to just how good they are.”

At first glance, the downside risks appear daunting. One PointsBet client took a bath several years ago when Andrew Luck left a game early from injury. The gambler, who took the over on Luck passing yards, suffered a loss of around 300X.

Those punters can receive some protection from PointsBet’s built-in safeguards. Although the bettor in question will face a maximum loss of $3,000 from a $10 bet, the book may decide to withhold around $350 from the client’s account. In the event a client’s account enters into negative territory, PointsBet will eat the difference in cost, Aitken said. On occasions where a “Black Swan event” occurs leading to a max loss in excess of 200-300X, the client will maintain his account at a zero-balance. In rare cases, the company’s algorithms can increase the amount that is withheld to between 75 and 100 percent of a customer’s account.

For Aitken, running the company in an ethical manner is at the forefront of his mind. PointsBet has operated in a highly regulated environment in Australia, much like one he expects in New Jersey.

“We reviewed their system including the spread betting feature to ensure compliance with all regulations including the responsible gaming safeguards we require,” a spokesperson for the New Jersey DGE wrote in a statement.

Despite PointsBet’s efforts to be fully transparent in alerting bettors of their risk exposure, it may be incumbent on individuals to know their limits. While taking a somewhat neutral stance on the spread betting product, the New York Council on Problem Gambling supports informed decision-making as a best practice for approaching risky gambling scenarios.

“If it increases the risk and increases the thrill, we have to be concerned,” said Jim Maney, the council’s executive director. “If it’s a change from the norm and all of a sudden we are increasing our bets to increase the thrill, that’s a sign of a pathological gambler.”

Gauging the company’s success in 2019

Given the company’s proximity to Wall Street, Aitken hopes to attract and retain high-worth clients that enjoy placing large, five-figure wagers. Since PointsBet has accepted six-figure fixed odds bets in Australia, their limits could be relatively high during Super Bowl week.

As PointsBet transitions to the U.S. market, the company has inked endorsement deals with Darrelle Revis and Allen Iverson.

“I think these guys are the real deal and their brand of being an industry disrupter really folds into mine,” Iverson said. “As the brand grows I really hope my involvement with the brand continues to grow.”

At first, PointsBet will look to develop a following through a competitive pricing structure. For the remainder of the NFL Playoffs, the site will offer spread lines of -105 on the fixed betting market. Besides receiving a $100 bonus credit for fixed odd products, new clients will receive free points protection that will cover their losses up to $250 on their first spread bet.

“That’s the stuff that’s in our DNA from Australia and that’s stuff we want to compete on in America,” Aitken said.