by Matt Rybaltowski
in Legislation, Sports 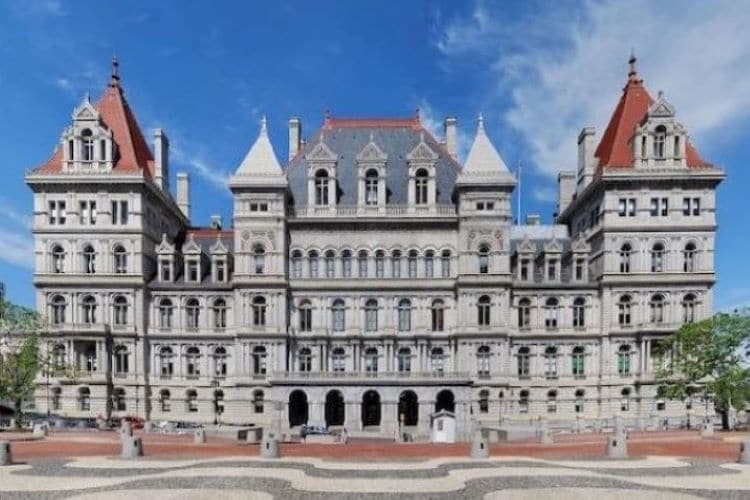 The early figures on mobile sports betting in New York are staggering, providing longtime state Assemblyman J. Gary Pretlow with optimism that the Empire State will become the nation’s most robust market for online sports wagering.

But Pretlow, chairman of the Assembly’s Committee on Racing and Wagering, is opposed to any operators petitioning the state for a lower tax rate on online sports betting gross gaming revenue (GGR), a tactic he contends would amount to a “bait-and-switch.” With a tax rate of 51% on online GGR, New York has the nation’s highest tax rate on sports betting along with New Hampshire, another state with a limited operator model for sports wagering.

Two days after the highly anticipated launch, Pretlow introduced legislation that restricts sportsbook licensees from requesting a modification to the tax rate.

“I don’t want the existing entities to be able to lower their taxes,” Pretlow told Sports Handle. “If you want to lower your tax, then let in more competition.”

The sizzling start suggests that New York may exceed $10 billion in handle in 2022, a benchmark only one state, New Jersey, reached last year. If the handle approaches $12-$15 billion, New York will be well on its way to hitting a target of $357 million in state tax revenue for Fiscal Year 2023, another number that would rank among the highest in the nation. Upon maturity, New York has a set a goal of generating $500 million in annual tax revenue, a level the state projects to reach by Fiscal Year 2026.

Pretlow, an open-market advocate, understands operators’ concerns about attaining profitability in the current tax environment. Last July, Pretlow told Sports Handle that he would not be surprised if the industry’s top companies teamed up in a consortium. He suggested that the companies would do everything in their power to “maximize their profits” since their expenses would be “so high.” Pretlow proved to be correct, as four industry heavyweights — FanDuel, DraftKings, BetMGM, and Bally Bet — joined forces successfully a month later in a so-called “super bid.”

While speculation mounted over the summer that the tax rate could approach 70%, Pretlow said at the time that he didn’t expect the rate to be bid beyond 55%. By October, the New York Gaming Commission released a final tax rate matrix for the state’s competitive bidding process on mobile sports wagering, which contained seven tax brackets ranging from a low of around 35% to a high of nearly 65%. The ceiling showed that at least one bidder submitted a preferred tax rate scenario of 64%. When the commission recommended bids of nine mobile sports betting operators in November, it set the final tax rate at 51% based on the contours of the matrix.

Pretlow is not opposed to lowering the tax rate below 40%, but only if more operators than the nine are allowed to enter the market. Based on the matrix, four additional operators would need to gain licensure for the rate to be downwardly revised to 39%. Two prominent companies, Fanatics and Barstool Sportsbook, headlined a group of companies that failed to secure bids in November. However, the commission has indicated that no additional operators will be authorized for licensure under its interpretation of New York law.

If the number of operators remains at nine, Pretlow wants the tax rate to stay above 50%. The current entities agreed on licensing requirements that granted the operators a 10-year license at a tax rate of 51%, and Pretlow wants the licensees to be held to that standard.

“If they come back to us and say, ‘Oh, we’re not making any money, could you lower our tax to 40%?’ I’m saying, ‘No, you made an agreement,'” Pretlow told Sports Handle.

“Why should we allow the entities that said they wanted to pay the 51% to lower the rate, when other entities could have had an equal chance at bidding? It’s about fairness,” he added.

Shortly after the commission awarded the recommended bids in November, DraftKings CEO Jason Robins mused that there could be changes in the New York tax rate over time. Still, Robins stopped short of publicly lobbying the state to lower the rate before the market debuted.

“We’re obviously prepared for anything that happens, but assuming that it stays in the same place as it is today, we’ll adjust accordingly,” Robins said at the Canaccord Genuity 2021 Digital Gaming Summit.

…it deflected the spotlight away from this other gem he said about New York: pic.twitter.com/qieJlE5xHs

Pretlow is not aware of any other jurisdiction with a provision similar to what he proposes, in which gambling companies would be barred from even asking the state to modify the tax rate. When asked if New York will rewrite the script for other states such as California and Florida on how to construct an equitable tax model on mobile sports wagering, Pretlow responded that he wants New York to become the nationwide leader across numerous fronts, including sports betting and horse racing.

“I only know that as chairperson of the racing committee for over a decade, I know what I want, and I really don’t take the lead from other states. I like to be innovative and do the right thing,” he said.

The steep tax rate has been met with criticism, however, by a bevy of prominent gaming industry leaders, who contend that it will be challenging to meet profitability targets at such a high rate. One industry analyst suggested that politicians can be unaware of how much revenue they are leaving on the table if operators invest instead in lower-tax jurisdictions.

Here’s the update on NY. You generate $100 of revenue, you spend $30 on promotions, you pay $51 to the state, you pay $3 to the feds, you have $16 left and you haven’t paid a salary or any of the other dozen expenses you owe, many of which are tied to revenue. NY is a gigantic 0!

At the moment, Pretlow said he has yet to receive any feedback on his tax freeze bill from Hochul, who took office in August after former Gov. Andrew Cuomo’s resignation.

“How could she be against it? If she’s against that, it will be showing her hand. … We’re trying to increase revenue, and this bill would maintain the revenues that we’re getting. If you don’t have this bill, you leave yourself open to having the revenues of the state decreased.”

There is precedence for Pretlow’s bill. In 2015, New York state awarded casino licenses to three properties, completing an exhaustive process that began early in Cuomo’s tenure when the former governor signaled his intention to expand casino gambling statewide. Around 2017, casino lobbyists returned to the state in attempts to negotiate for a lower tax rate, Pretlow indicated.

As of 2020, New York casinos in three regions paid a tax rate ranging from 37-45% on slot machine revenue, with Rivers Schenectady paying the highest rate at 45%. A year earlier, a Rivers general counsel lobbied unsuccessfully for a reduction, arguing that it was difficult to stay competitive at the rate considering two Massachusetts casinos paid a slot machine tax of around 25%.

One provision tucked into last year’s legislation on mobile sports betting contains a section that enables the upstate casinos to petition the commission for a reduction in slot taxes to a rate of 30%. Pretlow’s bill prevents companies from pursuing a similar pathway regarding their taxes on sports betting.

“I’ve been down this road, and I don’t want to go down it again,” Pretlow said.