Maintaining the status quo regarding remote registration for sports betting in Illinois, Gov. JB Pritzker again renewed Executive Order 2020-41 on Friday evening – the sixth time he has done so since initially issuing it in June.

Executive Order 2020-74 renewed a series of orders issued by Pritzker, including the aforementioned one that suspends the in-person registration requirement to obtain access to mobile sports wagering through Jan. 9, 2021. Under the order, customers can register for accounts via mobile devices or computers. Executive Order 2020-71 is set to expire Saturday.

Retail sportsbooks that operate in seven of the state’s 10 casinos and Hawthorne Race Course have been closed since Nov. 20 due to a rise in COVID-19 cases across Illinois. Prior to the shutdown, they had been operating at either 25% or 50% capacity depending on a series of metrics from the state’s Department of Health after the Illinois Gaming Board approved protocols for a July 1 re-opening.

No October numbers to crunch yet 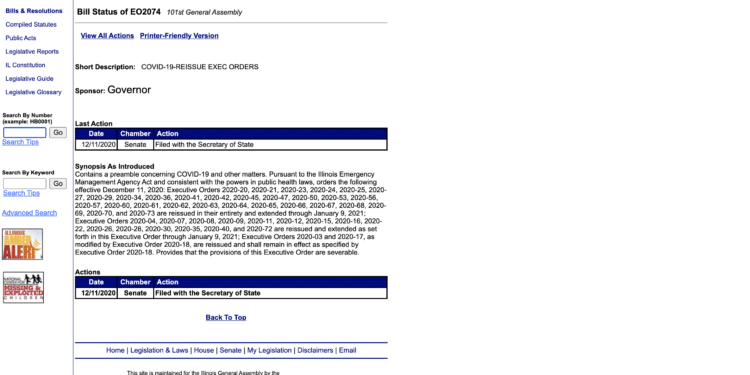 Unlike last month, this renewal by Pritzker was not accompanied with a sports betting revenue report from the Illinois Gaming Board for October. The regulatory agency reported that licensed Illinois sportsbooks handled more than $305 million in September, and Pritzker’s renewals of 2020-41 have proved vital to the new industry considering more than 90% of the handle was generated via online and mobile wagers.

October’s report is anticipated for multiple reasons. It will provide a more complete snapshot of the Illinois mobile sports betting market as all five current operators — BetRivers, DraftKings, FanDuel, PointsBet, and William Hill — were available to bettors for an entire month for the first time.

Illinois is the lone state among jurisdictions with legalized sports betting yet to report its numbers for October, though the lag is due to statutory rules that IGB Administrator Marcus Fruchter explained at the board’s most recent meeting last month. The eventual handle the IGB reports is all but certain to confirm October will have been the first month to surpass $3 billion in combined handle among jurisdictions with legalized sports betting since the U.S. Supreme Court struck down PASPA in May 2018.

Getting closer to the new legislative session

The repeated renewals of Executive Order 2020-41 continue to be a logistical necessity given the cancellation of the veto legislative sessions that were slated for this month. There has been talk the outgoing General Assembly will reconvene in early January, during which the in-person registration requirement provision could come up for discussion and potentially removed.

There are no restrictions on what can be brought up by the General Assembly — should it meet — since Pritzker did not issue any vetoes in 2020. Additionally, there is one bill in the queue related to sports wagering, SB 3889. State Senator and Illinois Senate President Don Harmon became chief sponsor of the bill Dec. 1, which could prove to be the vehicle to bring the provision up for discussion.

It is unclear, however, what SB 3889 does since the synopsis of the bill – originally filed in February before the first wagers were accepted in Illinois – simply notes an amendment to the Sports Wagering Act that “makes a technical change in a Section concerning the short title.” Further examination of the statute amended in the full text of SB 3889 shows the word “the” being inserted and a pre-existing “the” being struck through.

As a new bill, though, it would require five separate days to pass through both the House and the Senate. The 102nd General Assembly gets sworn in Jan. 13 and resets that clock, which means the bill could languish in Springfield indefinitely.