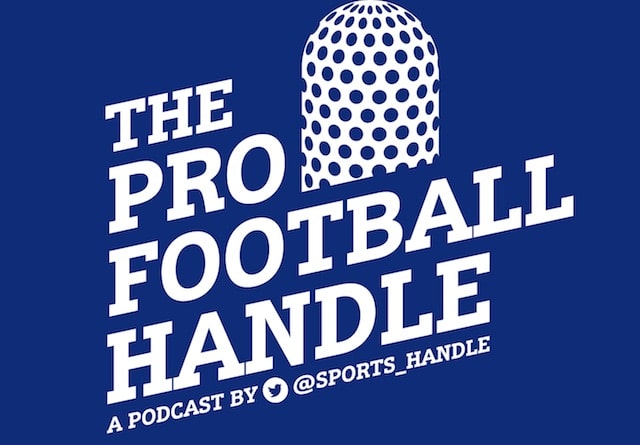 On The Pro Football Handle, Las Vegas-based sports talk voice Matt Perrault and veteran bookmaker Robert Walker dive into select NFL games, line movements and bookmaker liabilities, plus greater sports betting topics and stories that may have nothing to do with football. Walker has seen it all behind the counter and Perrault the same from behind the microphone, so they’ll have you prepared for anything.

Most bettors got crushed in Week 2 as underdogs went 11-5 against the spread and seven dogs won outright. Woof. We have now a two-game sample and as usual, a handful of surprises. Two of the biggest early season surprises will meet on Monday Night Football — the desperate and winless Pittsburgh Steelers, favored by a point, against the undefeated Tampa Bay Buccaneers.

Your comments are welcome at @sports_handle. Listen on on Spotify here. Time codes for the episode follow below.

02:48: The guys discuss the FanDuel Sportsbook dispute over an $82,000 ticket written in error. Walker has been involved in this intimately over the years. What’s an obvious mistake?

16:12:  New York Jets +3 at Cleveland Browns: “The Browns are legitimate favorites. It’s hard to even say that.” Expecting an interesting, close game.

19:45: Indianapolis Colts +6.5 at Philadelphia Eagles: How many points is Carson Wentz worth (in his first week back) versus Nick Foles?

22:58: Cincinnati Bengals +3 at Carolina Panthers: The undefeated (2-0) Bengals take the show on the road. “Bet Carolina or walk away.” Carolina is not a public team.

25:45: How does a bookmaker handle really, really, ridiculously bad teams? Such as the Cardinals and Bills (+16.5 at Minnesota).

29:54: Oakland Raiders +3 at Miami Dolphins: Opened at 4, bet down to 3. People simply don’t believe in Miami as Oakland is coming off a game they had to find a way to lose.

36:27: Battle of Los Angeles: Chargers +7 at Rams: Walker believes this closes at 7.5 or 7 -120.
“As a bookmaker we’ll need the Chargers. That’ll be one of biggest decisions of the day.” Rams are the real deal on both sides, the new Super Bowl favorite. “The pros take 7.5 early, always.”

38:27: Detroit Lions +7 at New England Patriots: Belichick against a former assistant coach, also off a loss… so what can the Lions do here? Books will need Lions and under (52).

40:50: Pittsburgh Steelers -1 at Tampa Bay Buccaneers: FitzMagic! The winless Steelers are staring at 0-2-1 and a full-fledged tailspin.

Come Monday night, the books will need the under, Walker says.

Have a profitable Week 3, folks. Thanks for listening and see you back next week, tell a friend, sign up for our newsletter and also check out the Cover City Podcast, featuring sports bettor Eric Rosenthal.