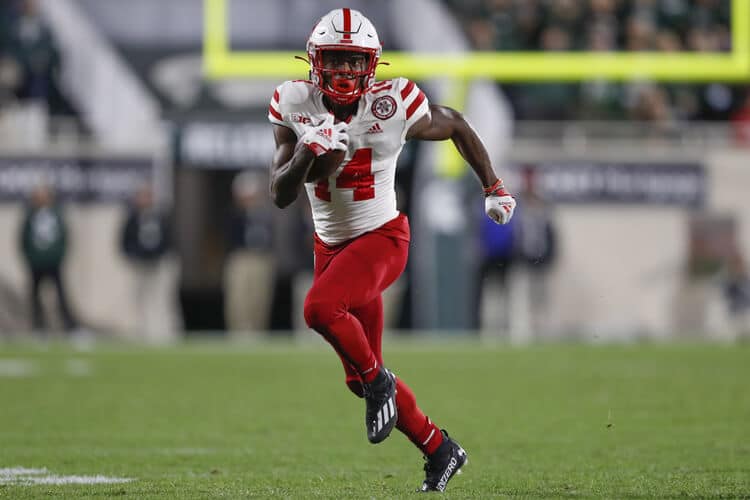 Persistence is a valuable trait. It turns out it’s especially valuable if you feel you’ve been wronged by a sportsbook.

Several bettors shared frustrations on social media in recent days after the under rushing yards prop for Nebraska running back Rahmir Johnson was voided. Johnson didn’t earn a carry in Saturday’s game, a 31-28 loss to Northwestern, giving under bettors a seemingly easy win for a prop that opened around 67.5 rushing yards. Instead, several major mobile sportsbooks, including BetMGM, DraftKings, and FanDuel, voided the wager, claiming Johnson didn’t play.

Rahmir Johnson rush yards under was popular among sharps over the weekend.

Nebraska has two #14 players. One played STs, other didn't dress.

Clear photo/vid evidence of Johnson being the #14 that played and team beats have confirmed it was him. DK, FD, MGM still won't pay. https://t.co/yVcFhYuUQr

While Johnson didn’t receive an offensive snap, he did play on special teams. FanDuel’s house rules say that the sportsbook will grade prop bets if a player was on the field for a snap, not specifying if a player would need to play on offense for those snaps to count. Johnson did play on special teams Saturday, and Sports Handle confirmed as much with a Nebraska team spokesperson Tuesday morning.

Interestingly, Johnson didn’t appear in the official box score, since he didn’t record a statistic during the game.

Later Tuesday morning, FanDuel and DraftKings began paying at least some of the aggrieved under bettors their winnings. One Twitter user, who goes by “Hitman” and helped spread the word about the voided bet, confirmed his bets on DraftKings and FanDuel were paid out Tuesday after days of conversations with those sports betting customer service teams. Another Twitter user also confirmed to Sports Handle that FanDuel paid out his under rushing yards prop bet Tuesday morning after the sportsbook’s customer service team initially argued that Johnson didn’t play against Northwestern.

A BetMGM spokesperson told Sports Handle that BetMGM voided the bet because Johnson “did not take an offensive snap.” The situation presents a gray area, as Johnson didn’t play on offense, making it impossible for him to earn rushing yards. Over bettors were certainly pleased to see a voided wager. At the same time, he did play in the game, making it a frustrating voided bet for under bettors. BetMGM didn’t seem like it had plans to award winning wagers to under bettors as of Tuesday morning.

Understandably, some under bettors were fuming when their bets were voided despite Johnson playing on special teams. They felt that, technically, they won the bet, especially at places like FanDuel where the house rules on player participation are clearly outlined. “Hitman” tweeted about his interactions with DraftKings’ customer service team, including sharing some detailed detective work.

Hitman and others on social media did their best Sherlock Holmes impressions, uncovering whatever they could to confirm Johnson’s special teams snaps. One Twitter user even shared video evidence of Johnson playing on punt coverage, where Johnson actually did a solid job as a gunner.

Here is a “snap” to satisfy all house rules. Near side gunner #14 Rahmir Johnson forcing the fair catch https://t.co/wbwjOoutn9

Despite the video evidence of Johnson in the game, DraftKings’ team initially wasn’t willing to pay out the wager. One message from a DraftKings support team member said that it wasn’t Johnson who played, but rather Mikai Gyabor. Both players share No. 14.

That statement was odd (and flat-out wrong), as it was clear Johnson played via video evidence and the information Sports Handle received from a Nebraska team spokesperson.

This was the most accurate tweet of the year when it came to Rahmir Johnson props.

Honestly, the lengths they went to in an effort to receive a winning wager were admirable.

Ultimately, some sportsbooks agreed to pay out the wagers, at least to a few individual users who complained via DM. Perhaps they wanted to do right by the bettors, or perhaps they were tired of DMs about the mess that is Nebraska football.

It’s worth noting Caesars Sportsbook awarded under bettors with a win well before DraftKings and FanDuel.

On the flip side, over bettors (there were some bettors and Nebraska fans on social media panicking when Johnson wasn’t getting offensive snaps during the game) were likely pleased their bets were voided. It’s an unusual situation, including the question of why Johnson wasn’t featured, after preseason reports suggested he was going to be an important piece of the offense.

Why make the initial bet?

To add to the intrigue, several well-respected prop bettors loved Johnson’s under rushing yards total prior to the game, which is part of why the voided bet created a stir. NBC Sports Edge College Football Analyst Eric Froton tweeted about the wager last Thursday, loving the spot for Johnson to go under his prop.

Say hello to Nebraska’s “wide back”

The role popularized by Deebo

Very versatile/agile. Should get the ball in space more than behind LOS.

“Rahmir Johnson has been playing what’s called a wide-back role in new offensive coordinator Mark Whipple’s system with the Cornhuskers,” Froton said in a social media video. “He is expected to employ a three-back rotation, and Rahmir Johnson is not part of it because he’s been playing the slot. He’ll be flexed all over the formation, which means he isn’t getting double-digit carries, which means he isn’t hitting the 67.5 line that is currently out there on FanDuel.”

Froton got slightly lucky with Johnson completely removed from the offensive game plan, but his logic for the under was extremely sound given Johnson’s positional switch. Others were happy to tail that play.

“Hitman” told Sports Handle he was fortunate for his large social media following. With over 11,000 Twitter followers, he was able to generate attention on the bet he believed was wrongly voided. If he didn’t have a following of over 10,000 people, it’s unclear if the voided bet would’ve generated enough attention to make sportsbooks rethink their original decisions.

It’s also a unique case, as most players with their individual prop bets available at major sportsbooks are starters or major contributors. It’s rare that a key running back is banished to only special teams duty with no pregame explanation as to why he wouldn’t earn carries. We’re all looking at you for an explanation, Scott Frost!

Johnson didn’t record a tackle on special teams and therefore didn’t appear in the official box score. If he had recorded a tackle, who knows, maybe the under prop bets would have been graded immediately as wins by DraftKings and FanDuel.

Instead, Johnson became the nation’s most talked about college football punt team gunner, and not because of his success in forcing fair catches.