A risky wager in Week 1 is the largest win on the company's PointsBetting platform since U.S. launch 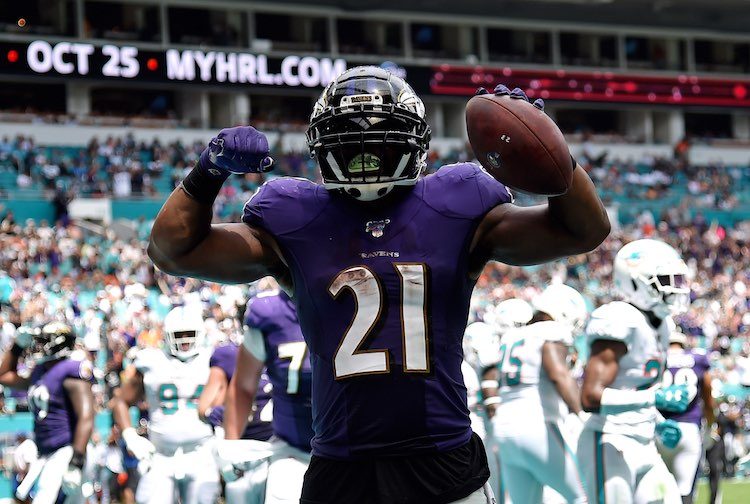 Imagine sitting on a Powerball ticket with a 99.9% probability of returning a six-figure payday.

On Sunday afternoon, a client at PointsBet Sportsbook sat pretty as Baltimore Ravens quarterback Lamar Jackson surgically picked apart a befuddled Miami Dolphins’ secondary in the opening half. The Ravens raced out to a 28-0 lead with less than two minutes elapsed in the second quarter after Jackson connected with Willie Snead on a 33-yard touchdown. Ravens’ bettors across the country rejoiced.

The client, a mystery bettor with PointsBet, placed a $30,000 wager on the Ravens at -6 at Miami. The wager mimicked certain strategies on the options market with a maximum win-loss limit. At $30,000 a point, the bettor could win a maximum of $600,000 or 20x his initial investment with a dominating Baltimore win. Conversely, the client could have suffered a $600,000 defeat had the Dolphins defied logic with a lopsided victory.

On a flawless afternoon, Jackson went 17 of 20 for 324 yards and five touchdowns as the Ravens crushed the Dolphins 59-10. The Ravens set a team record for points in a single game and Jackson became the first quarterback in franchise history to finish with a perfect 158.3 quarterback passer rating. The bettor collected the maximum payout of $600,000.

Lamar Jackson was nearly perfect in his season debut against the Dolphins, completing 85% of his passes, +24.8% above expectation (career best).@Lj_era8 flourished from inside the tackle box, on deep pass attempts and under pressure.#BALvsMIA | #RavensFlock pic.twitter.com/YJ01ZzqGB2

Sweat-free day at the office

Although backdoor covers do happen, Snead’s score 71 seconds into the second removed nearly all doubt. Baltimore outgained Miami at that point by 306 to 51 in net yards and forced two punts, along with an interception in the Dolphins first three series. With an overmatched Dolphins’ offensive line, it appeared the bettor would not have to sweat a loss. At all.

Baltimore, which never trailed, opened their season with a 49-yard run off right guard by Mark Ingram on their first offensive play from scrimmage. Ingram gave the Ravens the lead later in the drive on a 1-yard run. Even at 14-0, factoring the six-point spread, the bettor led by eight on the book’s PointsBetting platform — an equivalent of $240,000 ($30,000 times eight). Had the Dolphins responded with two touchdowns of their own, the six-figure payout would have swung decisively into the red for the client. Under the scenario, a 14-14 Ravens-Dolphins’ tie represented a six-point defeat for the bettor (a cash loss of $180,000). Baltimore, however, was just getting started.

Although the Dolphins cut into the lead with a 54 yard field goal early in the second quarter, the Ravens quickly responded with another Jackson touchdown — their fifth in six possessions.  Following a Dolphins’ punt, Baltimore increased the lead on a 2-yard run by Ingram with 1:42 left in the half. At 42-3, the bettor led by 33 points at PointsBet. If the client opted for a higher max win/max loss limit, the client would have been up $990,000.

As expected, the second half featured little scoring as the Ravens played conservatively on offense. The Dolphins, which finished with 200 total yards, went scoreless after halftime. The Ravens’ largest lead of the game came with 9:24 left on a 3-yard pass from backup quarterback Robert Griffin III to Mark Andrews. For NFL PointsBetting wagers, the sportsbook typically limits wagers to 50x of the initial bet. Had the client opted for the maximum limit, the bettor would have made $1.17 million on the wager ($1,200,000 minus $30,000).

Headed to the 'Pay Window' 🤑

A bettor placed a $30k "PointsBetting" wager on the Ravens that won them $600k 😳 pic.twitter.com/v6Uz9xh5vl

With large wagers on the PointsBet platform, the company usually withholds an amount that covers the risk of the bet which tends to be around 90% of most bets, the spokesman said.

At the end of the game, the “withheld amount” is returned to the bettor, the outcome from the bet is calculated and placed into the client’s account. In this particular instance, PointsBet held the full bet amount as collateral, he added.

The client is not a stranger to PointsBet or the unique betting format. Though the individual’s exact relationship with the sportsbook is unclear, a PointsBet spokesman said the client has bet with the company in the past. And while it is also unclear if the client bet off his $600,000 winnings, the spokesman confirmed that the bettor was paid in full immediately after the final results of the Ravens-Dolphins game were posted.

The bet is the largest wager placed via the company’s PointsBetting platform since their U.S. debut earlier this year. The $600,000 win is also PointsBet’s largest payout to any client through the platform since launching U.S. operations.

Other notable PointsBet wagers for Week 1

Another client of the sportsbook recorded a six-figure win on Sunday with a considerable spread bet. The bettor wagered a total of $17,800 per point on the Chiefs (-4.5) against the Jaguars. Kansas City prevailed 40-26, clearing the spread by 9.5 points. The client won $169,100 on the wager.

The Chiefs moved the ball at will against the Jaguars’ formidable passing defense. Chiefs quarterback Patrick Mahomes, the NFL’s reigning MVP, shredded the Jacksonville secondary for 378 yards and three touchdowns. One prop, a multiplier wager at PointsBet (passing yards times touchdowns), asked bettors to predict whether Mahomes’ total would surpass 959 points or stay under 845.

The bet was not settled until the fourth quarter when receiver Sammy Watkins caught a 3-yard touchdown, his second of the day. Mahomes’ third touchdown increased his total to 1,125 points — a 166 point victory for bettors who took the over. If Mahomes finished with one fewer touchdown pass, the under would have won by more than 75 points. The moral of the story: any multiplier bet above $1 a point presents a high-risk, high-upside proposition for sharp bettors and recreational players alike.

In total, a PointsBet spokesperson said the company lost upward of $1 million on Sunday on the PointsBetting platform.

Think the Dolphins will get blown out again, this time by the juggernaut New England Patriots, who will be debuting their new Pro Bowl toy, Antonio Brown? Coming off the Pats’ 33-3 drubbing of the Steelers, PointsBet has installed the defending Super Bowl champions as a whopping 18.5 point favorite at Miami on its fixed odds platform. On the PointsBetting platform, you can wager on whether the Pats’ winning margin will exceed 17 or fail to hit 15.

Despite several lopsided matchups on paper in recent years, such outsized spreads are rarely seen in the NFL. In fact, Sunday’s game will be just the second time that the Patriots have been favored by 17 or more on the road during the Bill Belichick era. It last occurred in December 2007 when the Pats edged the Ravens 27-24. Weeks later, New England completed an undefeated regular season.

Last season, after a lifeless 0-2 start by the Buffalo Bills, Buffalo became a 17-point underdog in Minnesota against a talented Vikings squad. In then-rookie Josh Allen’s first road start, Buffalo shocked Minnesota 27-6, or a 37 point difference from Vikings -17. Multiply that by $30,000.