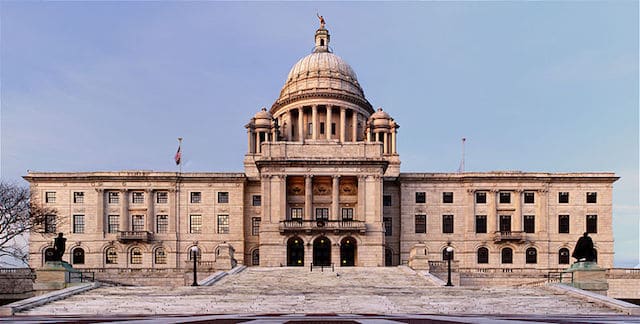 The Rhode Island Lottery on Tuesday put out a request for proposals (RFP) in order to find an operator to handle legal sports wagering in Rhode Island, should a change in federal law allow such. That could occur soonest via a New Jersey victory in the Supreme Court Sports Betting Case, Murphy v NCAA, in which a decision is expected by the end of June.

The Rhode Island Lottery is seeking to award an “exclusive contract to provide initial sports betting services” this year in time to potentially take wagers at the brick-and-mortar Twin River Casino in Lincoln by October 1, according to the Providence Journal. The same would apply for the state’s Twin River property in Tiverton, scheduled to open in 2018.

S 2045 makes reference to a 2016 ballot referendum, interpreting the results thereof to permit sports wagering. The bill says in part that:

The pending status of that bill did not stop Governor Raimondo from factoring in $23.5 million revenue into her budget proposal for next year. Perhaps it indicates optimism of a favorable Supreme Court ruling and the future of the bill.

“If the Supreme Court overturns [the federal ban], we have to have sports gambling to remain competitive,” said Mark Furcolo, director of the state Department of Revenue. “Massachusetts has big gambling entities to run their casinos. They will be able to offer sports betting very quickly.”

According to the Journal, the RFP says bidders should show “their capability to readily adapt to any future additions to authorized sports betting operations in the state including, but not limited to, remote sports betting.”

Nearly every other state preparing to offer sports betting has recognized online sports betting (via a sportsbook app or otherwise) an essential to compete with the black market.

The state should expect to receive bids from numerous operators identified in SportsHandle’s piece, “In A Regulated U.S. Sports Betting Market, Which Operator Will Be King?”

Both MLB and the NBA have lobbyists registered in the state, set to push for a direct cut of wagers (as a “royalty”) and the right to exclusively control data that the eventual Rhode Island operator may use. We’ll keep an eye on S 2045 to see how things advance.