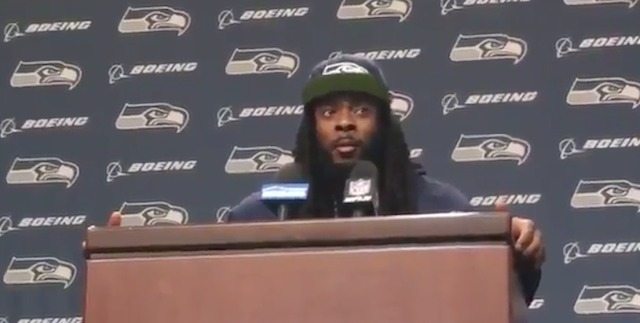 Seattle Seahawks All-Pro cornerback Richard Sherman has never hesitated to speak directly and critically about what he perceives to be hypocritical NFL rules — regarding endorsements, grueling schedules caused by Thursday games, and other matters. On Wednesday, Sherman, who’s listed on the injury report with a hamstring injury (but practiced fully), criticized the league regarding its injury reporting requirements. Via the Seattle Times:

Richard Sherman rips the NFL on injury reporting rules: "Our injury report is specifically to make sure the gamblers get their odds right." pic.twitter.com/bTDlS5ZdeP

For those who can’t hit the volume:

“From what I understand, the rule is for the gamblers. You know, for Vegas. To make sure the odds and everything are what they’re supposed to be. Which is apparently what the league is concerned about when we’re talking about injuries and things like that, so maybe somebody should look into that. Because I thought we weren’t a gambling league and we were against all those things. But our injury report is specifically to make sure the gamblers get their odds right.”

At the end of last season, head coach Pete Carroll said that Sherman played through a “significant” MCL injury for much of the season, although Sherman was never listed on the injury report with a knee injury. The league investigated the matter but ultimately only issued Seattle a warning, a slap on the knee if you will.

Unofficially, Sherman is right about the purpose of injury reports. Of course, the league’s stated policy is such:

The Practice Report provides clubs and fans with an accurate description of a player’s injury status and how much he participated in practice during the week. If any player has a significant or noteworthy injury, it must be listed on the practice report, even if he fully participates in practice and the team expects that he will play in the team’s next game. This is especially important for key players whose injuries may be covered extensively by the media.

The Game Status Report provides clubs and fans with an accurate description of a player’s availability for the club’s next game. Teams must notify the league, their opponent, local and national media, and the league’s broadcast partners of the status of their injured players by 4 p.m. ET the day before their next scheduled game.

The position that reporting stems from media coverage and out of concern for fans and opponents is specious at best. And ironically, the league’s policy concludes: “Reporting process is of paramount importance in maintaining the integrity of the game.” Which is commissioner Roger Goodell’s chief position for opposing sports betting outside of Nevada.

Obviously, we at SportsHandle are pro-sports betting, and also pro-honesty, which the league is not with respect to its public position on injury reports yet private embrace of wagering.