Drones, Livestreams, Clean Subways: What Future Of Sports Betting May Look Like 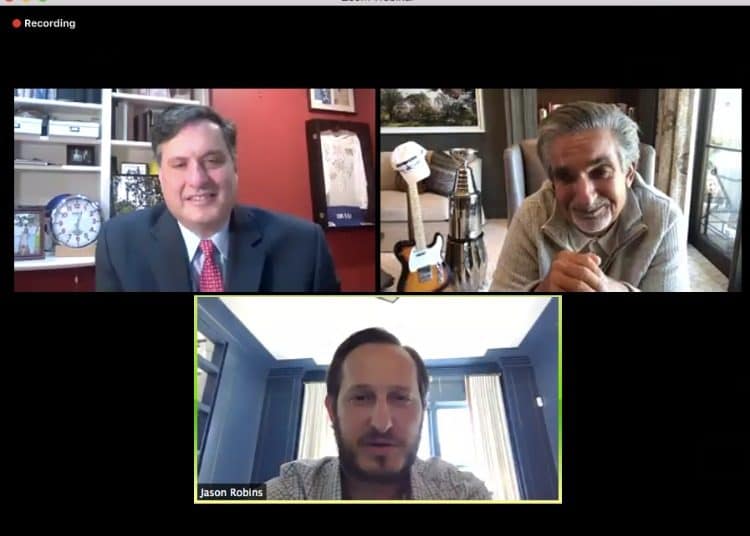 The old saying is that necessity is the mother of invention. When it comes to sports and legal sports betting in our current climate, that cliche couldn’t be more applicable.

Nearly three months into a new reality where the novel coronavirus is dictating everything from our ability to eat out to whether or not the NBA and NHL will actually finish the 2019-20 season, Monumental Sports and Entertainment owner Ted Leonsis and DraftKings CEO Jason Robins spent a half hour pontificating on what’s next for more than 800 viewers during a virtual roundtable discussion Friday titled “Reopening Sports in a World of Social Distancing with Ron Klain,” hosted by Revolution, a Washington, D.C.-based investment firm.

Though neither was even asked when any of the major U.S. professional sports might re-start or start seasons, both Leonsis and Robins were clear that the COVID-19 crisis isn’t just speeding up innovation in the sports and sports betting world, but potentially creating new ways to engage fans, consume sports and create a more immersive experience.

“In the short term, I’d say we’re learning how important sports are to our collective psyche, and how much we miss it,” Leonsis said. “When we watch a documentary on Michael Jordan (“The Last Dance”) on ESPN and it gets 8 million views or the NFL Draft on Zoom gets 55 million, it shows how important sports is to our psyche.”

According to Awful Announcing, the NFL Draft on ESPN and ESPN2 drew about 32 million viewers and three episodes of The Last Dance drew 5.8 million or more.

With sports and by extension sports betting virtually shut down, both Leonsis and Robins are using what could be a down time to innovate and fine-tune existing business models. Leonsis also suggested the current situation could promote more public-private partnerships while Robins pointed to how live streaming could change how we view sports and the possible acceleration of sports betting legislation.

“The public needs to trust us,” Leonsis said, as he listed how the pro sports leagues are working with the CDC and other government agencies to find the safest way to get fans back into stadiums. “We’ll probably see an increase in public-private partnerships. Think about Madison Square Garden — it’s on top of the metro, so we have to ensure the metro is clean and our fans can get to us.”

Robins, whose company went public earlier this month despite no sports being played in the U.S., talked enthusiastically about live streaming, which most online sports betting platforms offer. As an example, he said DraftKings is currently live streaming German Bundesliga games, darts, ping pong and other difficult-to-access events.

“Part of the fun of betting is that you can watch [the event] while you are betting,” Robins said. “I think the major sports are so accessible that … there is a lot of opportunity to integrate the [other] games to be viewed while betting.

“One interesting aspect is that a television broadcast has a little bit of a delay, but the role streaming can play is that while broadcasters may not want to shorten the delay, we we may be able to offer streaming [without the delay]. I think we’ll see more of these streams made for bettors.”

On a parallel track to live streaming, Leonsis addressed how cameras and technology can be leveraged to give fans a better, more authentic experience, even if they are not in the stands. FOX Sports has already announced it will use simulated crowd sounds for its NFL broadcasts in the fall if no fans are in the stands.

“With no fans in the stands, we really need to push the envelope in production value of these games,” Leonsis said. “We can use drones or cameras closer to the court. And players will be in a bubble, so we need to find a way to get them engaged.”

Robins also said he thinks some states may “accelerate” the pace at which they choose to legalize sports betting. Given the amount of lost revenue states are currently experiencing, the desire to introduce a new revenue stream that doesn’t directly tax citizens could be appealing. In fact, both Virginia and Washington legalized sports betting during the pandemic shutting down U.S. businesses, Louisiana lawmakers are on the cusp of sending a sports betting referendum to voters, and lawmakers in Connecticut, Massachusetts and Missouri all have sports betting bills circulating in their respective state capitols.

Will virtual sports be ‘sticky?’

Robins and Leonsis also addressed the topic of the future of virtual sports and what role those sports are playing right now. Similar to panelists at ICE North America last week, both say interest in virtual sports has spiked, but it’s not clear if that interest will continue once the major professional sports are back.

"Esports was really small for us until, you know, about 2 months ago,” DraftKings CEO Jason Robins said." https://t.co/TPAa2ASkDH

We’re seeing “people are interested in them and they want something,” Robins said of virtual sports. “Now they are playing it and they like it. … People want some sport, any sport. But what will things look like when sports come back? Will people stick with ping pong? Or will they shift back to basketball or baseball or football? Or what about golf and NASCAR coming back this month? Will they pick up incremental fans? I’m fascinated by the interplay, and I think it’s a trend that will keep going.”

The second golf event in our coronavirus world is set to tee off Sunday, when Tiger Woods and Peyton Manning take on Phil Mickelson and Tom Brady in what’s being billed as “Tiger-Phil II.” The one-day event is the second fundraiser in two weeks that involves PGA Tour players. Leonsis said last weekend’s TaylorMade Driving Relief outdrew most four-day competitive golf events in terms of ratings. The Tour will restart events June 11 at the Colonial Country Club in Fort Worth, Texas, with no fans.

NASCAR is in the midst of a packed schedule that started with back-to-back races at Darlington, and then two more in Charlotte, all between May 17-May 27. There are five more races on the schedule through mid-June, all at Southern U.S. tracks.

But the question everyone wants answered is this: When will pro sports be back in the U.S.? The closest either came to answering was Leonsis, who owns both the NBA Washington Wizards and NHL Washington Capitals.

“We are preparing to play the remainder or part of this season we are still in,” he said, though it was unclear if he was referencing the NBA, NHL or both. “We are still in this season, and [are looking at] bringing teams together in one arena and playing multiple games and the playoffs.”