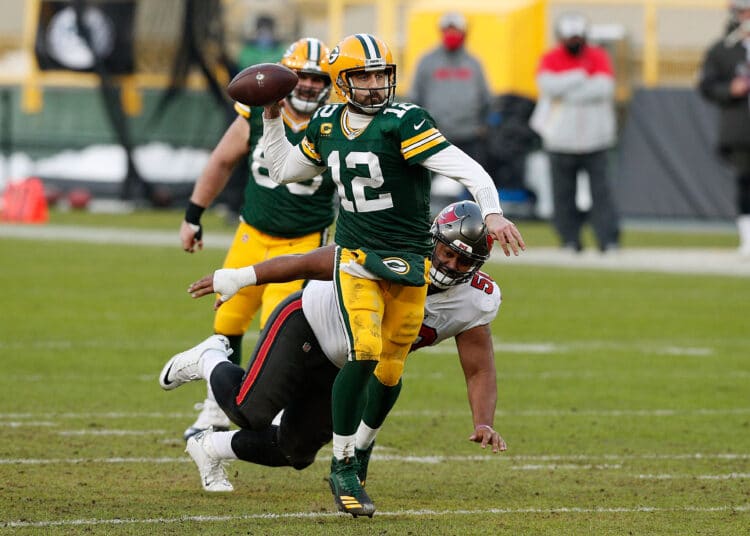 A reminder the NFL has no true offseason has been provided again as multiple sportsbooks scrambled to adjust offerings starting Friday night based on speculation regarding the status of Green Bay Packers quarterback and 2020 NFL MVP Aaron Rodgers.

Rodgers, who has been cryptic about his status when asked to address it and otherwise silent on the subject, did have a matching Instagram story with wide receiver Davante Adams showing a photo of Michael Jordan and Scottie Pippen, implying 2021 could be their “Last Dance.” It was also reported during the weekend that talks between the Packers and Adams for a potential contract extension broke down.

This tweet and story by Pro Football Talk, however, early Friday night, is what caught the sports betting world’s attention. Approximately two hours after that story was published, NFC North futures on both DraftKings and BetRivers were not available in Illinois — home of Green Bay’s archrivals the Chicago Bears — though the latter did have Rodgers on its boards for Offensive Player of the Year and NFL MVP.

As of 10:30 a.m. CT Monday, three of the six mobile sportsbooks in Illinois — FanDuel, DraftKings, and PointsBet — had NFC North futures available while BetRivers, Barstool Sportsbook, and William Hill did not. FanDuel and DraftKings were offering season over/under win totals, with both books setting their respective lines at 8.5 wins with a -120/+100 split, but by noon CT, both had come off the board.

DraftKings had also pulled its NFC North offerings by noon. In a span of two hours, the Packers moved from a +150 co-favorite with the Vikings to a +110 favorite at FanDuel, and their odds shortened slightly from +125 to +120 at PointsBet as reports had Rodgers possibly playing for the Packers.

#Packers QB Aaron Rodgers has indicated to people close to him that he does plan to play for GB this season, sources say. That is the expectation. Many factors at play, but with GM Brian Gutekunst saying he is “hopeful” for a positive outcome, there is a glimmer of optimism.

It is not the first time this offseason Green Bay’s win total has been taken off the board by a sportsbook due to speculation surrounding Rodgers. DraftKings had pulled its offering in April, along with those of Green Bay’s NFC North rivals Chicago, Detroit, and Minnesota.

Are the ‘Rodgers Rules’ a sign of things to come?

were moving our odds and taking bets while other books compete for the title of who pulled the odds down first. https://t.co/VUh4hphhxQ

Given the NFL’s full-on embrace of sports betting — 2021 will mark the first season the league will have sportsbooks as official partners following its deals with Caesars, FanDuel, and DraftKings — time will tell if this type of odds movement and rejiggering of offerings will be a one-off or perhaps the new normal when a marquee player makes news.

Rodgers can be presented to support both sides of the argument. As a Super Bowl winner and three-time NFL MVP, anything he does is newsworthy, football or otherwise, and this summer has been mostly otherwise.

While keeping the football media largely at arm’s length this summer, Rodgers hosted Jeopardy! and played in the made-for-TV (and made-for-sports betting) golf event “The Match” in which he and Bryson DeChambeau defeated Tampa Bay Buccaneers quarterback Tom Brady and Phil Mickelson in match play. Rodgers has an offbeat personality that does not fit into any preconceived box, which further adds to his compelling nature.

And how his scenario plays out can be compared with other NFL stars. For example, multiple sportsbooks do not list Houston Texans quarterback Deshaun Watson among player futures since the expectation is the 2020 leader in passing yards will be on the commissioner’s exempt list as the league investigates allegations of sexual misconduct.

Watson’s impact on sportsbooks is also notable because while he, unlike Rodgers, is not listed among player futures offerings, his impending absence appears to at least be partially incorporated into the Texans over/under for season wins.

The above tweet from Circa Sports is a reminder of the increasing competition for the sports betting dollar — whether it’s spent in Las Vegas or while lounging on your coach using a smartphone. NFL betting is big business regardless of market — the $5.7 billion wagered on football in Nevada in the post-PASPA era represents nearly 37% of the entire handle. Staying in the NFC North, Illinois will cross $1 billion in football handle in September, just a year and a half after launching in March 2020.

Boasting about being able to adjust lines quickly to breaking news has the potential to become a selling point for bettors who line-shop in hunt of the best plays, more so when it means the potential offering is available at one book over another. However scenarios like this also scream caveat emptor — buyer beware — given the whiplash-like speed with which breaking news can impact odds offerings.