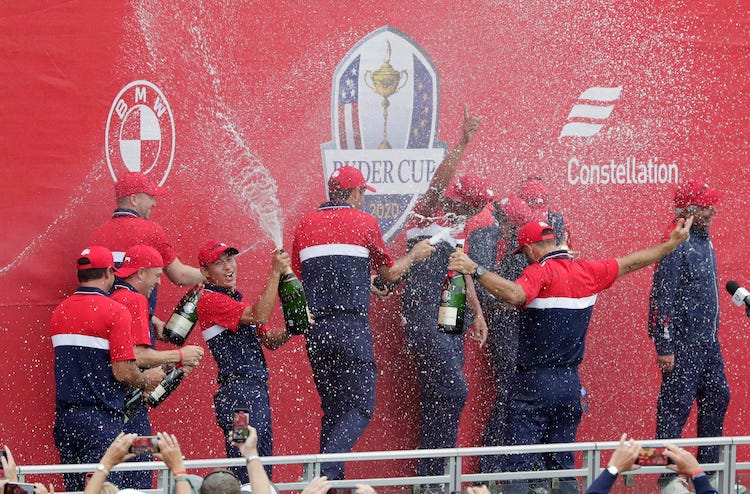 Sunday was a very good day for the United States side at the Ryder Cup but perhaps a better one for an Illinois-based sports bettor who hit a parlay of a lifetime (yours, mine, and everyone else’s), nailing 12 legs on the final Sunday matchups for a total payout of $966,290.

According to FanDuel Sportsbook, the bettor risked $8 on the roughly 150,000-to-1 longshot parlay that correctly called ties in the Collin Morikawa-Viktor Hovland (+550 for a tie) and Jordan Spieth-Tommy Fleetwood (+650) matches. That Morikawa tie came courtesy of the 24-year-old missing a short putt on 18.

Here’s the full card below. Separate from the ties, the 12-legger was highlighted by picking U.S. rookie Scottie Scheffler (+230) over Spaniard Jon Rahm, the top-ranked golfer in the world. Scheffler opened with four birdies in a decisive 4 & 3 victory on a banner day for the U.S. The Americans’ 19-9 Ryder Cup win was the biggest over Europe in the modern format, and the victors were able to enjoy it on home soil at Whistling Straits in Haven, Wis.

The implied probability of Scheffler’s win, by itself, was 30%. Rahm had won both the U.S. Open and British Open this year (and, of course, a positive COVID test in June forced him to withdraw from the Memorial Tournament while leading by six strokes with one round to go).

The stars indeed aligned for this bettor, and if they are still working the same job this week, well, it must be a pretty good job because that’s life-changing money for most.

While we don’t have a way to independently verify that this parlay bombshell is true, I would be stunned if it were fabricated. What the heck would be the point for the nation’s leading sportsbook? Unless the bettor steps forward (after sobering up) and shows the goods, we’ll have to take FanDuel at its word.

Also, obligatory — this winner rests atop a parlay graveyard of almosts and fun-while-it-lasted. Parlays are fun. They are popular. Recreational bettors like to risk a little to win a lot. You know, like the lottery. So, choose your own adventure. It most certainly will not end up with a pot of gold, but hey, half a movie ticket costs nearly $8 these days. Or better yet, it covers almost one month of Netflix.

Not easy to humble a 13-leg NFL parlay, but the Illinois bettor pulled it off.

One of our customers hit this 13-leg NFL parlay of a LIFETIME yesterday 🤑 pic.twitter.com/s67bxprThg