by Matt Rybaltowski
in Analysis 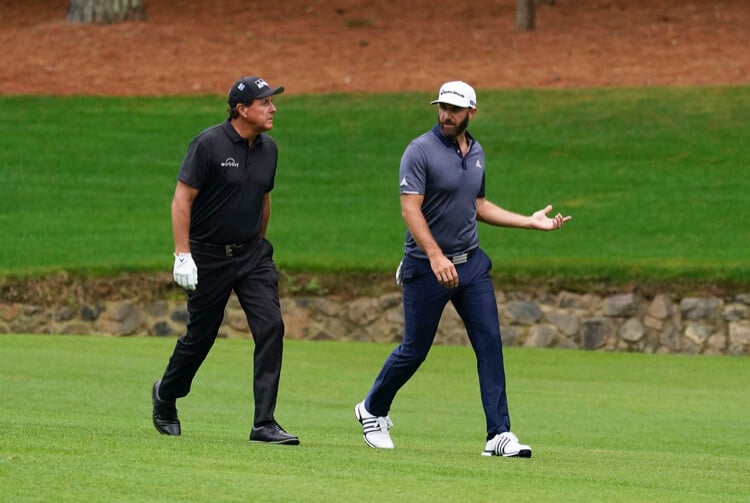 The launch of the LIV Golf Invitational Series has unleashed a maelstrom in global professional golf unlike any during Phil Mickelson’s three decades playing on the PGA Tour.

On Monday, Mickelson ended his four-month sabbatical from the sport when he signed a lucrative deal with the Saudi Arabian-backed tour for a reported sum of around $200 million. Mickelson said he used the time off for a period of reflection, during which an unauthorized biography about the six-time major winner was published chronicling his lengthy history of heavy gambling — both on the course through high-stakes practice rounds and at the window through large wagers on the NFL.

Some interesting quotes in here from Phil Mickelson about his gambling habits. https://t.co/LjfaCRnSXR pic.twitter.com/RvfcSets4v

With Mickelson as the face of the breakaway tour, several major U.S. sportsbooks have begun to accept wagers on this week’s LIV series debut taking place Thursday-Saturday at the Centurion Club in London. Bettors can wager on the event at DraftKings and PointsBet, each of which — ironically enough — maintains an official sports betting partnership with the PGA Tour. FanDuel Sportsbook, another PGA sportsbook partner, is not accepting wagers on the event in the U.S., a spokesman told Sports Handle.

BetMGM, an official sports betting partner of the PGA Tour, did not accept wagers on the Centurion tournament on Thursday, but did offer live odds on the Volvo Car Scandinavian Mixed, a DP World Tour (formerly the European Tour) event in Sweden. Another prominent sportsbook operator, BetRivers, accepted wagers on the LIV golf event in Connecticut and Ontario.

When PGA Tour Commissioner Jay Monahan met with several player agents last week at Muirfield Village Golf Club, he reportedly drew a red line concerning the eligibility of tour players who participate in LIV series events. Current PGA Tour players have the option of remaining on the tour or jumping to the Saudi-backed series, ESPN.com reported, but they cannot participate in both.

Launched in October 2021, the LIV series is backed by the Public Investment Fund, the sovereign wealth fund of Saudi Arabia. It ranks among the world’s largest funds, with total assets under management of about $600 billion. Greg Norman, a two-time major champion and a golf course designer, serves as the CEO of LIV Golf Investments, which is providing more than $400 million in seed money to launch the series.

And Phil's gotta be Wags. https://t.co/sh0RZK7lFZ

It is unclear if the PGA Tour sought to have its official sportsbook partners refrain from offering betting on the inaugural LIV event. While U.S. books have posted odds on international, non-PGA Tour events in the past, it does not appear that there is contractual language in the agreements that preclude the PGA’s sportsbook partners from booking action on rival leagues.

Representatives from two U.S. sportsbook operators told Sports Handle last week that they had not been advised by the PGA Tour on any betting matters related to the event at the Centurion Club.

When reached by Sports Handle on Tuesday, a PGA Tour spokesman declined comment.

Still, Norman was unable to land a 20-something star such as Justin Thomas, Jon Rahm, or Jordan Spieth, all of whom have captured majors since 2016. The series reportedly targeted the biggest names in golf, as Mickelson noted that practically every player in the Top 100 of the world had been contacted at some point. More pointedly, Micklelson told author Alan Shipnuck that he enlisted three top players to join the series, although he did not name them.

“For us, it’s like booking the NFL versus the USFL,” Sherman said. “It’s just a minimal handle on all these other events.”

Ahead of the Centurion event, the LIV series has yet to name an official betting partner. LIV Golf could also generate millions by outsourcing its in-game data feed to a third-party provider, as the PGA Tour has done with IMG Arena.

An LIV spokesperson did not respond to a request from Sports Handle for comment.

Other issues impacting the LIV handle

Although the series debut will be available with free livestreaming on LIVGolf.com, YouTube, and Facebook, the absence of a network broadcast partner could also affect handle, said Sherman, who serves as head golf oddsmaker at the SuperBook. For majors, the SuperBook offers a wide menu of offerings including Top 5, Top 10, and Top 20 finishers, head-to-head matchups, and in-house live odds. The SuperBook may limit LIV offerings this week to the outright winner only, Sherman indicated, due to lack of interest among bettors.

BetRivers, meanwhile, is offering a full menu of betting offerings on the London, event including:

There is some sentiment that large global corporations should not conduct business with LIV Golf, considering that Saudi crown prince Mohammed bin Salman serves as the chairman of the Public Investment Fund. In March, Saudi Arabia authorized the execution of 81 men, according to Human Rights Watch, a New York-based non-governmental organization, in the kingdom’s largest mass execution in years. Saudi Arabia also ranked 155th out of 165 jurisdictions in the Cato Institute’s 2021 Human Freedom Index, which weighs factors such as the rule of law, security and safety, freedom of expression, the right to properly assemble, and property rights.

Regardless of how you feel about LIV Golf, or today’s events, I would (sincerely) encourage everyone to read this piece from @TheAtlantic about MBS and the future (and past) of Saudi Arabia. The answers are not as simple as Twitter often makes them. https://t.co/8MczsAiA6h

The CIA previously concluded that the prince ordered the assassination of journalist Jamal Khashoggi in October 2018, charges that Bin Salman has vehemently denied. The golf series is part of Bin Salman’s Vision 2030 plan, one he believes has modernized Saudi Arabia with changes such as the legalization of cinemas and the abolition of a longstanding ban on women from driving.

Mickelson signed with LIV Golf despite his inflammatory comments concerning the Saudi regime months ago.

“They’re scary motherf***ers to get involved with,” Shipnuck reported Mickelson told him in November 2021. “We know they killed Khashoggi and have a horrible record on human rights. They execute people over there for being gay. … I’m not sure I even want [LIV Golf] to succeed.”

“I certainly do not condone human rights violations. And addressing what happened to Jamal Khashoggi is awful.”
Khashoggi was murdered and his body was cut into pieces with a bone saw. https://t.co/V5UvXYMyIu

From a commercial perspective, some parallels can be drawn between the reported human rights violations in Saudi Arabia and Russia’s invasion of Ukraine. U.S. sportsbooks generally stopped taking action on Russian sports events after Russian President Vladimir Putin ordered the invasion in late February.

Sports bettors who are appalled by the Saudi kingdom’s record on human rights may respond by boycotting the new golf series. Following the London opener, there are seven other events on the 2022 schedule, including five in the U.S.

“It’s not being played in [the Saudi] regime, it’s being played in London — that could be a differentiator,” a spokesperson for a major U.S. sportsbook operator said of the opener.

While participating golfers were mostly reticent to tackle questions on the Saudi regime this week, one tried to separate the athletic endeavors from the moral issues surrounding the kingdom.

“If we tried to cure geopolitical situations in every country we play golf in, we wouldn’t play a lot of golf,” said Graeme McDowell, of Northern Ireland, at a Tuesday press conference.

Mickelson still intends to participate in golf’s majors, beginning with this month’s U.S. Open in Brookline, Massachusetts, on June 16. Johnson, the 2016 U.S. Open winner, receives an exemption for the national championship through at least 2025. On Tuesday, the USGA added a wrinkle to the ongoing narrative when it allowed qualified players who were participating in the London event to remain in the U.S. Open field.

Mickelson, who skipped The Masters and the PGA Championship, last played on the PGA Tour in January when he missed the cut at the Farmer’s Insurance Open. At SuperBook Sports, Mickelson has odds of 30/1 to win this week’s event in London.

Mickelson has steeper odds than Sam Horsfield, Justin Harding, and Matt Jones, none of whom has notched a Top 10 finish in a major. The trio have five European Tour wins combined, along with only two victories on the PGA Tour. Mickelson is tied for eighth all-time in PGA Tour career victories with 45.

“When you’re away from the game that long, you’re not going to step in and be that competitive,” Sherman told Sports Handle.

The SuperBook has installed Johnson as the favorite at 5/1, followed by Talor Gooch and Oosthuizen, at 9/1 and 10/1, respectively. Johnson is also favored to win the event at DraftKings.

Dustin Johnson opens as the favorite for the Liv Golf Invitational, in what is definitely a very competitive field 😅

DraftKings is taking action on the event in a handful of jurisdictions, including Arizona, Ontario, Connecticut, and Wyoming. As of Wednesday morning, a decision on whether to allow bets on LIV Golf had yet to be made public by the Colorado Division of Gaming.

Each of the first seven events has a purse of $25 million, with the season finale in Miami doubling the amount to $50 million. On Wednesday, SI.com reported that major winners Bryson DeChambeau and Patrick Reed are set to join LIV Golf for the first U.S. event at Pumpkin Ridge Golf Club in Portland on June 30. LIV Golf has events scheduled in three states with legalized sports betting: Illinois, New Jersey, and Oregon.