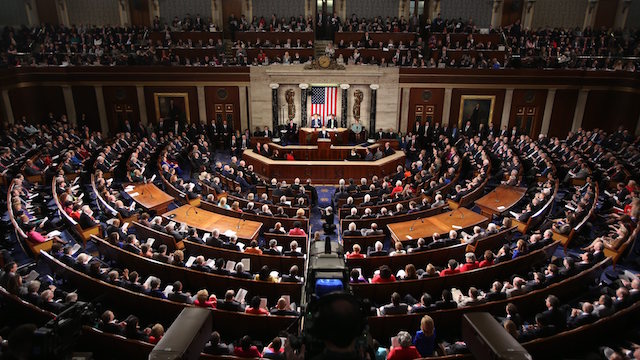 Floor of the House of Representatives

After being a lone voice this summer pushing for a federal framework on sports betting, Utah senator Orrin Hatch got some company on Wednesday when New York Democrat Chuck Schumer released a memo outlining his thoughts on legalized sports betting.

First released to ESPN, Schumer said that he wants to see sportsbooks across the nation use only official league data and to allow the professional sports leagues a voice in deciding what types of bets should be allowed.

Schumer’s ideas could be a boon to the pro sports leagues, which have been lobbying for a royalty or integrity fee across the country this year. The NBA, Major League Baseball and the PGA released a joint statement in support of Schumer’s plan. While no state that currently has legalized sports betting is paying the pro leagues, New York state lawmakers are pushing for an integrity fee should the Empire State legalize sports betting. It’s possible that if Schumer’s idea takes hold on a federal level, a royalty could be included, which would be a key change for the six states (including three that are already taking bets) that have legal sports betting.

Legislators Have Been Pushing for an Integrity Fee Should NY Sports Betting Become Legal.

In Albany, New York state Senator John Bonacic (R-District 42) and Representative Gary Pretlow (D-District 89) have put forth legislation that would pay the pro leagues 1/5 of 1 percent of handle. This number is significantly lower than the 1 percent the pro leagues had been lobbying for, but a windfall nonetheless.

Under Schumer’s plan, the professional leagues would stand to gain even without an integrity fee. Requiring sportsbooks to use only official league data would force operators to pay the leagues for the data. The memo all but panders to the professional leagues. The NFL, in particular, has voiced support for a federal framework, which would make oversight simpler – one law to work with vs. different laws or regulations in every sports betting state.

But Schumer is already getting pushback. The American Gaming Association, which released a statement mirroring its comments after Hatch made a plea for Congress to entertain sports betting last Friday. In both statements, the organization refers to federal oversight of sports betting as “an abject failure,” and points to the “thriving illegal market” that blossomed after the Professional and Amateur Sports Protection Act was passed in 1972. That law was struck down by the Supreme Court on May 14, paving the way for states to determine if they want to have sports betting.

The AGA goes on to say, “New federal mandates are a nonstarter. The casino industry is working with stakeholders to ensure the proper protections for consumers, and the integrity of bets and sporting contests are included in state policy, universally implemented by all operators in those states, and overseen by effective state and tribal gaming regulators.”

Schumer and Hatch Favor a Federal Sports Betting Framework While Pallone and New Jersey Were Key Drivers in Getting PASPA Overturned.

Schumer becomes the third Congressman to join the sports betting discussion, joining Hatch, who spoke before the Senate last week, and New Jersey Democrat Representative Frank Pallone, who introduced sports betting legislation in 2017. While Hatch and Schumer are advocating for a federal framework, Pallone is in the opposing camp – his 2017 bill was the GAME Act, which called for repealing PASPA.