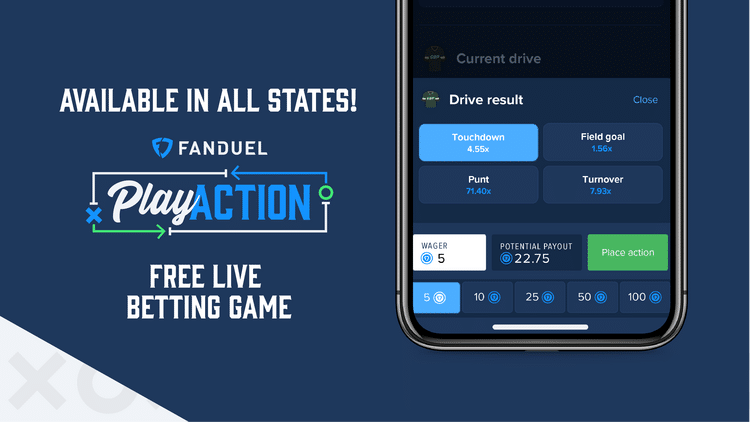 Already trailing by two touchdowns in a Week 4 matchup against the Los Angeles Chargers, the Tampa Bay Buccaneers faced a critical challenge on a disputed catch by O.J. Howard midway through the second quarter.

A 5-yard catch by the Bucs’ tight end in the left flat appeared to give Tampa a first down on its own 40. The Chargers, however, challenged the reception, asserting that Howard dropped the pass as he brought the ball to the ground. As players on the sideline reacted emotionally to the ruling, participants in a free-to-play contest from FanDuel monitored the decision closely.

Powered by Simplebet, a B2B (business-to-business) product-development company, the free contest enables FanDuel entrants to wager on a new category of in-play sports betting, known as “micro-markets.” Simplebet uses cutting-edge concepts such as machine learning and artificial intelligence (AI) to generate fast betting opportunities throughout a sporting contest that potentially could allow bettors to wager on the next player to drain a 3-pointer in the NBA Finals. Simplebet’s sportsbook partners may eventually use the automated software solution to offer wagers on if the next hit will go for extra bases during the World Series, or if the next completion in the Super Bowl will exceed 20 yards.

A popular micro-market offered through the free FanDuel contest allows participants to bet on the result of each drive for NFL games. Prior to Tom Brady’s third-down pass, a participant received odds of +380 on a proposition bet that the drive would end in a punt. While Brady rushed to the line to prevent a challenge, Chargers coach Anthony Lynn threw a red flag signifying the dispute. Instantly, the odds of a Bucs punt plunged to +264.

On the game broadcast, CBS Sports analyst Charles Davis argued that the Bucs needed to demonstrate that Howard wasn’t touched on the play to withstand the challenge. Minutes later, following a commercial break, it became apparent that Howard made the catch by “giving himself up,” before a Chargers defender made contact with him, according to CBS rules expert Gene Steratore. Within seconds, the odds of a punt increased to +489, then rose again to +609.

Odds before Chargers’ challenge on 3rd-and-4 from Bucs’ 35

Two plays later, Bucs running back Ronald Jones ripped through the line with a stiff arm, scampering for a 23-yard run to the Chargers’ 30. A Bucs punt with Tampa this deep into Chargers territory appeared exceedingly unlikely. As such, the odds on a punt surged to 49.26x. Following a 4-yard run by Jones on the ensuing play, the odds shot up again to 171.3x (a near 172-1 return on a $1 bet).

The rapid fluctuations underscore the allure of micro betting. An astute bettor could have locked in favorable odds before the challenge that the drive would end in a score, while a less observant one had to lament the fact that he moved too slowly to capitalize on the speedy odds movements.

A machine learning use case for in-game betting

FanDuel’s new product, known as FanDuel PlayAction, allows bettors to wager on the result of each drive, as the aforementioned Bucs situation illustrates, along with if a team will cross the 50-yard line or record an offensive score. Players receive 1,000 tokens per quarter, with the option of wagering up to 100 tokens per bet. Founded in 2018 with its first product launched in August, Simplebet was co-founded by former CAA Sports Media Ventures CEO Chris Bevilacqua, who also founded CSTV Networks, now CBS Sports Network.

The free-to-play (FTP) product, currently in soft launch, has delivered encouraging results since its fall debut. Over a span of three NFL weeks, through Oct. 11, FanDuel surpassed well over 900,000 total wagers placed on the platform, FanDuel Director, Publicity Kevin Hennessy told Sports Handle. Bevilacqua, meanwhile, has been impressed with levels of consumer engagement, a metric that speaks to Simplebet’s potential for product stickiness, as bettors become more accustomed to the micro betting format.

“That is off-the-charts engagement and it’s only been drive-level markets,” Bevilacqua told Sports Handle.

Simplebet’s pipeline of talent includes a former manager of analytics at DraftKings, a data scientist who graduated from Harvard with high honors in statistics, while serving as the president of the Harvard Sports Analysis Collective, and a machine-learning expert who developed algorithms as a research fellow at Northrop Grumman to help improve missile detection.

For baseball, Simplebet can marry historical data on pitcher-batter matchups with signals from the live data feeds to develop odds for individual at-bats in real time. The match-day signals track various weather conditions, type of venue (domed stadium vs. open-air), and playing surface from a betting standpoint. The signals are then fed into Simplebet’s machine-learning models which have the ability to identify game trends, determine linear probabilities and generate prices.

“We don’t have traders, that’s the beauty of it,” he told Sports Handle. “Everything we’ve built is through machine learning and automation, there’s no human intervention.”

Soon, Simplebet will expand into play markets giving bettors the option of placing wagers on a larger menu of derivative bets. Through its official data partnership with the NFL, Sportradar appears to have gained access to the NFL’s proprietary Next Gen Stats platform. It is already possible to track Tyreek Hill’s top-end speed on a 65-yard slant-and-go, but imagine betting on it: The advanced stats invite the possibility that bettors could wager on whether Hill will exceed a maximum speed of 35.5 mph on the route.

When combined with Simplebet’s vast database, the possibilities are endless. Simplebet’s models will process data as granular as Jose Altuve’s propensity for swinging away on a 3-0 count. At the same time, the models know how often Aroldis Chapman delivers a pitch inside the strike zone in 3-0 situations. The advanced models may even be able to determine the probability that Chapman will get Altuve to chase a 3-0 fastball out of the zone. Then, through machine learning, Simplebet can algorithmically price all potential outcomes helping sportsbooks achieve a desired hold percentage.

“We’re only really scratching the surface here,” said Joey Levy, a co-founder of Simplebet along with Scott Marshall and Bevilacqua.

The company’s system is designed to automatically detect when an irregularity occurs, quite often from a miscue by a data scout inside a stadium. Levy points to an instance early in the season when Cam Newton completed a 15-yard pass to the Patriots’ own 40. When a live-data feed indicated that New England started its next play from its own 10, the system had the ability to detect and override the error immediately.

Less than two months into the NFL season, several sharp bettors have already criticized a prominent operator for its alleged tendency to suspend in-play betting markets at key moments in a game, possibly hand-picking certain bets to reject or accept. The operator, William Hill US, denied the claims in a statement to Sports Handle.

The decision to suspend an in-game line gives sportsbook traders added time to assess their risk profile for a given market. When the market is flooded with Lakers bets after a LeBron James 3-pointer, should a sportsbook accept a $20,000 bet on the Lakers at -7.5, or does the book reserve the right to suspend the wager until the operator moves the line another half-point? Critics argue that some books engage in unfair business practices by suspending bets at a higher rate and a longer duration when the wagers are made by sharp players.

Conversely, by automating all market mechanics, Simplebet can reprice some in-game lines in a matter of milliseconds. After refining the data from an official data feed, Simplebet can deliver a new price to a sportsbook partner within 1.5 seconds from when an event occurs in real time, Levy explained. As a result, when a sportsbook suspends an in-game bet for a period of 10-12 seconds, the operator is creating an unfair user experience, he added.

My bottom line point on the topic of bet delays/rejections. There's a long thread in here if you are nerdy enough for the details. https://t.co/VJPez1neom

When it comes to licensing requirements, Simplebet is already licensed in several jurisdictions. The company expects to be licensed in every jurisdiction where mobile sports betting is legal by the end of 2020, Bevilacqua said. In addition, Simplebet aims to go live with a real-money product at some point in the near future, pending regulatory approval.

For now, the company’s main focus is to continue to innovate and to become a technical leader in the space, said Simon Gershey, who serves as Simplebet’s chief technology officer. Ultimately, Simplebet would like to redefine how in-play betting will look in the future, Gershey emphasized.

David Forsström, a researcher at the Department of Psychology, Stockholm University, is one of the world’s foremost experts on artificial intelligence in sports betting. While Forsström is unsure if Simplebet could eventually capture anywhere between $1-$2 billion in annual revenue over the next decade, he believes the growth potential for the company is enormous. More broadly, Forsström indicated that AI and machine learning could be used to predict consumer gambling patterns ahead of major global sporting events.

One caveat, according to the researcher, is that micro betting may only be sustainable among the larger leagues. One Swedish book, Svenska Spel AB, has stopped accepting micro bets for the lower divisions, he said, due to the risk of match-fixing on derivative markets such as total corner kicks and penalties committed.

“The economic incentive is too big for players in some leagues because they don’t make any money at all [for playing],” Forsström told Sports Handle, via email.

In that respect, Simplebet believes it can work with operators to spot irregular betting patterns extremely quickly since its system is completely automated. Simplebet appeals to sportsbook operators not because its algorithmic approach is superior, or because its trading strategy is more effective, Levy noted, but because the user experience will be enhanced due to its automated market mechanics and minimized in-play suspensions.