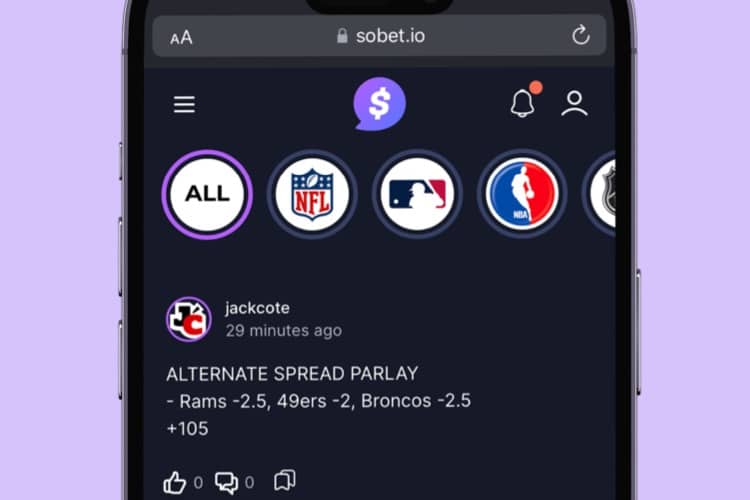 When Cooper Lycan was finished with his military commitment, he did what any good West Point graduate would do: retired to start his own business.

Just 28 and with five years of leadership experience to his name, Lycan left the Army Rangers for a far less dangerous, but probably oftentimes as thrilling, pursuit. He jumped into the dynamic world of sports betting by building a platform that brings the most knowledgeable voices in the landscape together in a single space.

Lycan’s new venture, SoBet, is a combination of Twitter, Instagram, and TikTok sports betting and fantasy sports advice that takes out the guesswork and the searching around on social media. Rather than check out one professional picker on Twitter and the next on TikTok, for $9.95 per month an active bettor can find all his or her favorites in a familiar-looking feed on a site dedicated only to discussion and advice surrounding sports betting and fantasy sports.

And so SoBet was born this year.

Lycan completed his military commitment in May after spending 2½ years at Nashville’s Fort Campbell with the same unit featured in the HBO series Band of Brothers and 2½ years at Savannah’s Hunter Army Airfield with the 75th Ranger Regiment. He did one tour in Afghanistan as a fire support officer for Bravo Company, 1st Ranger Battalion, 75th Ranger Regiment. That experience on top of his education at West Point, he said, made him well positioned to be an entrepreneur.

“I didn’t really plan to do this,” Lycan said. “But I had a lot of good mentors around me. I have this philosophy that nothing is going to be more stressful than leading people into a special operation, and this is sports betting! I try to look at the bigger picture and try to stack small wins in a month and not worry about the little things.”

Even through a video link, Lycan’s enthusiasm is palpable. He’s not yet 30, which could make it tough to be a leader in business, but he’s clearly having fun, and his attitude is infectious. Given that he spent five years learning and executing the art of war, he has a different perspective than many his age. He’s had experiences that remind him how fleeting life can be, and he had the opportunity to take the point on operations and drills that could be derailed by the smallest mistake.

The Army also taught him about organization, motivation, and execution.

“Cooper is still in his 20s and he’s one of the better leaders I’ve ever worked with,” said public relations consultant Pawel Zoneff. “He’s set systems in place that are clear, so his whole company is built for scalability. It’s very clear what platforms to communicate on, and how to do things.”

Or more succinctly put: “He’s been a great leader. He’s really great at getting s**t done,” said Brock Smith, a SoBet influencer whose handle is GutsyPicksCash.

Those talents have resulted in quick growth and a company that looks to not only give consumers what they want but to appeal to the sports betting influencers that make the engine run.

After securing funding, SoBet launched in June with eight influencers and 300,000 followers. By October, those numbers had grown to more than 25 influencers and over 1.3 million subscribers. The monthly price tag is affordable for most, and the idea of one-stop shopping is convenient. It’s a little like Apple+ News, where you can get People Magazine, the Wall Street Journal, and Travel + Leisure magazine all in one place rather than visiting multiple platforms.

On SoBet, customers can scroll through the main feed, watch a livestream, or check out the latest from their favorite influencer. SoBet vets each contributor, and they are also rated by SharpRank, a leaderboard that ranks influencers in the industry.

SoBet is currently available via web only, with plans to add apps for both iPhone and Android in the near future.

As part of his business model, Lycan wanted to find a way to not only attract the best influencers, but to keep them. In the past, people like Smith, who previously worked in sportsbooks, or a big-time college football player turned influencer like Adam Breneman had to create content and attract customers individually on multiple platforms. But they likely made their living by betting on sports or with a day job. Consumers may pay for the picks, but one bad week and the customer would be gone, or as Lycan said, “these guys were living and dying” by their picks.

For Smith, having regular cash flow from SoBet takes the pressure off. If he has a down week betting sports, there’s still money coming in to pay the bills. And while the money provides a cushion, what attracted Smith to SoBet is the platform’s commitment to “smart sports betting” and the idea of community. Smith was the first to sign on as an influencer and his GutsyPicksCash SoBet channel went live June 1.

“It’s a way to make more money by monetizing what I’m doing,” Smith said. “It’s additional cash flow on top of sports gambling, which is truly one of the more stressful things you can do, so it’s great to have something that is regular cash flow so I don’t have to worry about it if I have a tough week.”

With SoBet, the influencers are a community and there’s a little more room for that bad week. Any SoBet user can look at any influencer, and influencers are paid for the subscribers they bring into the site. The creator gets a percentage of the monthly subscription price as long a subscriber stays with SoBet. Smith said he knows he gets looks from SoBet subscribers brought in by other creators, and likewise, his subscribers look at other influencers, creating a synergy that doesn’t exist on other social media platforms.

Creators have regular meetings with Lycan and the SoBet team, so all are involved in the growth and path of the platform. Smith said that besides being fun and informative, the calls help to reinforce the idea that all of the influencers can help and support each other rather than be in competition.

“My biggest thing is chemistry,” Smith said. “We all have to have chemistry, we’re all on the same team. It’s us against the books, we’re not taking each other’s money. Everyone knows everyone, we all talk. I want this to be the biggest sports gambling media site in the world, so we all have to want the same thing.” 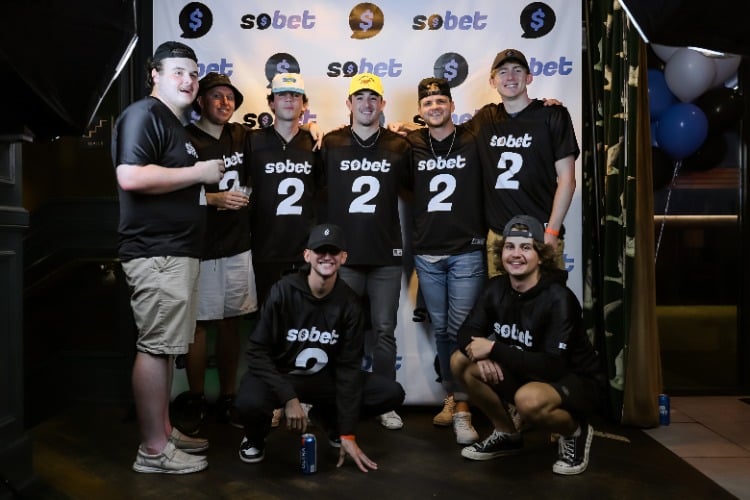 SoBet has already created pick ’em competitions that pit one influencer’s subscribers against another’s as a way to further engagement. And the site will continue to grow and evolve as opportunities or ideas present themselves.

“Given my experience in the military and leadership experience, I can kind of preach and say this is an unhealthy landscape and it’s better to collaborate than to compete,” Lycan said. “I think we resonate with influencers. It’s about team building, finding the right people, and putting people in positions to succeed. From that aspect, we’ve built a good team around the company and I think that’s something I’ve learned to do in my nine years” at West Point and in the Army.

Lycan said the hardest part of starting his business was getting funding. He had the idea for the platform while he was still active military and began working in earnest on the concept while he was stationed in Savannah, where he began talking to influencers, building a team, and actually creating the website.

“For every first-time entrepreneur, it’s the hard part, and I think that people coming out of the military are at a disadvantage because they haven’t been out in the world,” Lycan said. “But I think the intangibles that you get at West Point set me up in a different way.”

Lycan majored in business at West Point, and from talking to him for even a little while, it’s clear he’s something of a math and business nerd. He casually and enthusiastically peppers conversation with phrases like “regression analysis” and “return on investment,” making it clear that he knows his stuff.

Join my sobet team and get all my sports picks and educational videos and write ups for just $10 a month.
You also get about 25 other guys write ups and picks for the same $10 a month.https://t.co/7dgjaQJ4ga pic.twitter.com/jy8Mv6hd2I

Another company, SharpRank, provides an info box that charts an influencer’s return on investment, Princeton percentile, volume index, and other measuring sticks, making it clear that SoBet isn’t just a random collection of influencers, but a carefully curated group.

Lycan is committed, like Smith, to creating a “smarter sports bettor” and educating bettors, not just about what or how to wager, but about when not to and the risks involved. That tenet is a key part of the kind of influencer, and ultimately, reputation that SoBet will attract.

“I really started doing this because I wanted to help people,” Smith said. “I started as all just educational videos and in between, I released my picks. Other companies had hit me up … Probably five companies came to me to sell my picks, but none of them are like SoBet, so when Cooper approached me and showed me what the website was going be like live … what’s really important to me is smarter sports betting. That immediately drew me in. Every other company was all about money.”