by Chris Altruda
in Industry, Legal 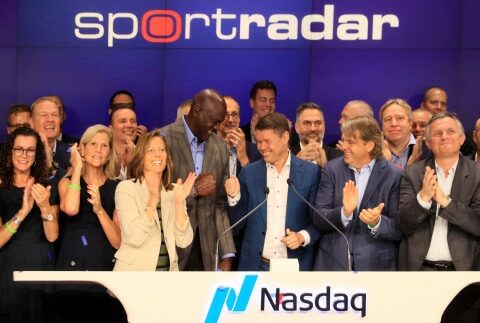 Flanked by a prominent investor, former NBA star Michael Jordan, founder and CEO Carsten Koerl rang the opening bell at NASDAQ Tuesday, concluding a 14-month process for the Swiss-based company to go public. The data provider raised $513 million by selling 19 million shares in its IPO, and underwriters have a 30-day window to purchase an additional 2.85 million shares.

The pricing met expectations of Sportradar’s SEC F-1 filings last week, in which it expected the share price to be between $25 and $28. Sportradar will trade under the NASDAQ ticker symbol “SRAD.” The stock closed its first day of trading at $25.05, down 7.22%.

Amazing day for our @Sportradar team! TY to our incredible partners for making today’s #SportradarIPO a reality. #NASDAQ #NasdaqListed pic.twitter.com/Ze4hVS84QC

“Ringing the Opening Bell at the NASDAQ as a public company is a significant milestone in the history of Sportradar,” Koerl said. “It is a testament to the ambition, originality and resourcefulness of our employees, the strength and commitment of our partners, the confidence and support of our investors and the vision of our customers. Moving forward, we’ll continue to propel digital transformation across the sports ecosystem as a result of our dedication to developing the most innovative products and solutions that drive fan engagement.”

Sportradar had considered going public via a special purpose acquisition company (SPAC), but a planned merger with Horizon Acquisition Corp. II earlier this year — reportedly valued at $10 billion at one point — was never finalized. It is possible the valuation of the SPAC was affected when Sportradar’s arch rival, Genius Sports, signed a deal with the NFL in April to be the league’s exclusive distributor of sports betting data.

But Sportradar recently signed a 10-year deal to be the official sports betting data provider of the NHL, and last month it extended its multiyear data agreement with FanDuel through 2028. Sportradar has strategic partnerships with more than 150 sports leagues worldwide, including the NBA and MLB. According to Sportico, its deal with the NHL gives the league the ability to purchase $30 million in shares through the IPO with Sportradar now public.

Los Angeles Dodgers co-owner Todd Boehly, who had created Horizon in hopes of taking Sportradar public via SPAC, was among a group of investors who purchased nearly six million shares worth $159 million outside of the 19 million shares sold in the IPO.