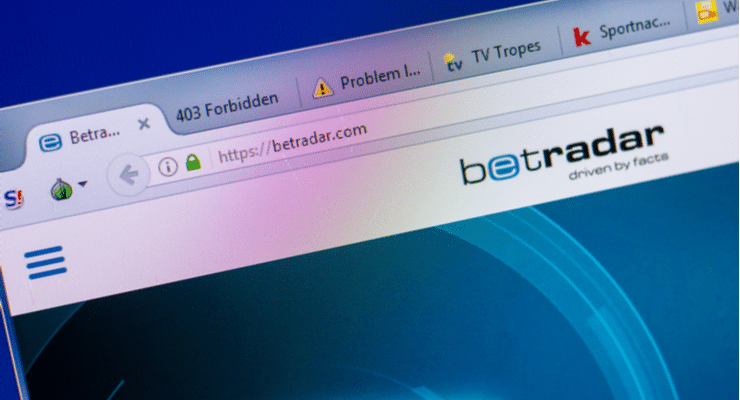 With the NFL regular season scheduled to begin in less than two months, Sportradar made waves earlier this week when a report surfaced that the global sports betting data provider is considering plans to go public, through a so-called reverse merger.

The Switzerland-headquartered company is pondering a move into public markets, according to Sportico,  potentially through a merger with a special purpose acquisition company, commonly known as a SPAC. After SPACs raised record levels of IPO money last year, blank check companies have increased in prominence within sports gambling circles in light of DraftKings‘ tri-merger with SBTech and Diamond Eagle Acquisition Corp. (DEAC), a public acquisition vehicle led by former media executive Jeff Sagansky and founding investor Harry Sloan.

Sportradar, meanwhile, has partnerships in place with all four major North American professional sports leagues, most notably the NFL. Over the last month, two sportsbook operators — FanDuel and Penn National Gaming — have gained access to NFL official data through partnerships with Sportradar.

A spokesperson from Sportradar did not immediately respond to a request for comment.

If Sportradar eventually decides to go public, it would not come as a surprise if an investment group led by the Sagansky-Sloan duo emerges as a leading candidate to merge with the data provider. In March, when Sagansky and Sloan launched Flying Eagle Acquisition Corp (FEAC) with a $600 million IPO, it marked the sixth time the duo launched a public acquisition vehicle over the last decade.

Under DraftKings’ tri-merger, the pro-forma company was valued at $3.3 billion, while the transaction raised more than $300 million from a group of institutional investors. Although it is very challenging, if not impossible, to peg the amount Sportradar may look to raise, it would be fair to assume that the company’s value has appreciated significantly over the last 24 months, said Roundhill Investments CEO and co-founder Will Hershey. In July 2018, Sportradar was valued at approximately $2.4 billion when Canada Pension Plan Investment Board (CPPIB) and Silicon Valley-based growth equity firm TCV acquired a stake in the company from private equity firm EQT and certain minority shareholders.

The amount raised by FEAC in its IPO is on the higher end for SPACs in 2020, Hershey noted. As of mid-June, nearly three dozen SPACs already went public, according to SPACInsider, raising more than $10.3 billion overall.

“I think FEAC is a natural candidate given their success with DEAC and DraftKings, but more importantly, there are only a handful of publicly listed SPACs that have the currency to acquire a meaningful stake in a company of Sportradar’s size,” Hershey told Sports Handle.

.@DraftKings' market capitalization in excess of $12 billion could augur well for the viability of sports betting companies on public markets.

(@MattRybaltowski takes a deep, thorough dive on the DK intrigue)https://t.co/iTUf0cGySQ

The management team behind FEAC has achieved demonstrable success over the course of their careers within the media and entertainment industry, Hershey added. In addition, FEAC management likely views sports betting as a long-term growth opportunity as younger audiences push to be involved in the action instead of passively engaging in the content, he explained.

“This is the same reason we are bullish on eSports and streaming,” Hershey said.

The Sagansky/Sloan group is also regarded as one of the top SPAC teams on the street, a gaming equities research analyst told Sports Handle. The group received high marks from the analyst in structuring the DraftKings deal, while SPACs overall have been trading well on “good deal announcements.” The considerations could augur well for Sportradar if the company intends on becoming a publicly traded entity before the end of the year.

There are other possibilities for Sportradar beyond FEAC, if the company opts to pursue an IPO. While 32 SPACs have already gone public this year, nine more are on the verge of listing, according to SPACInsider. It is why SPACs are poised to exceed last year’s record of $13.6 billion raised by a far margin.

Sportradar counts heavy hitters such as Michael Jordan, Dallas Mavericks owner Mark Cuban, and Washington Wizards and Capitals owner Ted Leonsis among its list of prominent investors. Three years before Leonsis agreed on terms to launch a retail sportsbook inside Capital One Arena, the founder of Monumental Sports & Entertainment gushed about Sportradar’s capabilities in implementing Big Data Analytics for sports betting and other purposes.

As construction develops on the Capital One Arena sportsbook and in-game betting expands into other arenas nationwide, team executives could face mounting pressure to unload their positions in Sportradar. A number of DraftKings executives cashed in last month by selling a portion of their holdings at a considerable profit.

For retail and mobile sportsbooks alike, a partnership with Sportradar has become extremely valuable for in-game betting since the company’s proprietary algorithms are used to help construct live betting platforms and markets.

They have been able to create this very robust database of lots of activities per game. When you look at the algebra or geometry around a game, in football you have 11 guys on each side. Each player has a point and counterpoint, those are discreet actions. Those all get digitized and put into a database. As you go by team, by player, by position, you’re really starting to build big data and that data can be used for competitive advantage or playing, it’s used for gambling outside the U.S. — Ted Leonsis in 2016 interview with Forbes.

It is important to note that Leonsis offered the above-referenced remarks two years before the historic PASPA ruling when U.S. sports betting still remained unconstitutional outside Nevada and in other limited forms.

The portfolio manager, who spoke to Sports Handle on the condition of anonymity, has more than 14,000 followers on his Twitter account, @dividendblower.

Sportradar has not operated without controversy. Over the last year, the Switzerland-headquartered company has been named in two European sports betting probes. Sportradar has denied any impropriety in both.

For the moment, there appears to be limited downside for Sportradar in completing an initial public offering. Less than six weeks after DraftKings’ public debut, company stock more than doubled to $40 a share amid strong long-term growth prospects. There is speculation that Sportradar could be valued in the range of $3 billion to $4 billion.

“If there is, I’m not aware of what it might be,” Hershey said, when asked if there are downside risks for the company in pursuing an IPO. “Formula 1 is public, MSG is public, Disney is public. They’ve done just fine.”

Nevertheless, there is an inherent risk that COVID-19 could postpone the start of the NFL season, which in turn could shift investor sentiment and delay a public transaction from Sportradar, the aforementioned portfolio manager explained. Still, there are a bevy of established SPAC structures that could facilitate a public listing of Sportradar in the coming months, according to the iGaming expert.

“As things stand now, the window is right, and as long as NFL is set to start in September, I think we could see Sportradar going public before that,” he said.