Handle Down In April, May? That’s Not Cause For Concern

Sports betting handle, revenue cyclical and based on sports calendar 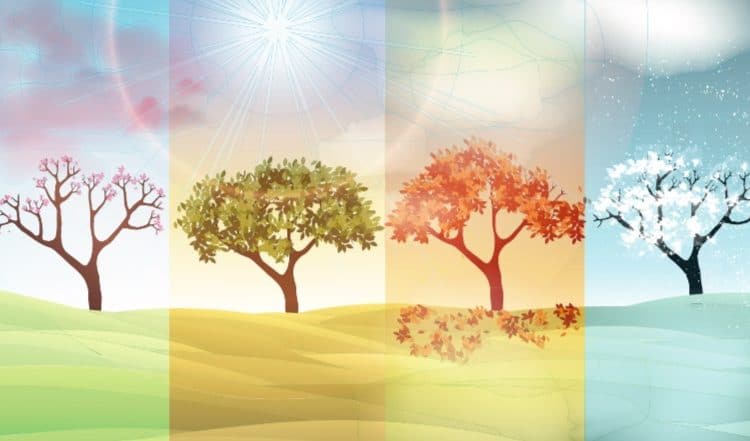 Sports betting tax revenue has not exceeded expectations in most non-New Jersey states (in most cases due to overestimations), and now the sleepier days on the U.S. betting calendar are approaching, following the soon-to-conclude NBA Finals and NHL Stanley Cup Finals. Some in the media have suggested that April declines in betting handle are cause for concern, that maybe less than a year after the Supreme Court opened the door for legal sports betting on a state-by-state basis that consumers are losing interest.

“The interesting thing about sports betting is that is follows a curve of seasonality,” said Vice President/Sportsbook Scot McClintic of Penn National, which has properties in Nevada, Mississippi, Pennsylvania and West Virginia, to name a few. “If 1 is normal, then football (season) is 1.3 or 1.4 times as much, or say, May is about a .7. You have almost double the activity during football season. Everything has been playing out the way you would expect.”

We all know that football is king, and sportsbooks are ruled by football bettors from late August (NFL preseason)-early February (Super Bowl). And just a month after the Super Bowl wraps up, the second biggest sporting even of the year tips off — the NCAA basketball tournament, which means that sportsbooks have built-in interest from August-early April every year.

But what about the rest of the calendar? The Kentucky Derby and Triple Crown races in May-June as well as the start of the NBA and NHL playoffs can make May a relatively busy month, and June benefits from the NBA and NHL finals. But the combination of baseball and those playoffs and “other” events (as categorized in Nevada revenue reports) like the PGA’s Masters don’t combine to overcome the absence of football. The quietest month of the year is July. In fact, Superbook Executive Vice President Jay Kornegay said the week of MLB’s All-Star Game is the slowest week of the year.

In order to generate as much revenue as possible across the rhythmic sports betting cycle, operators do their best to maximize business during the busy times and generate business during the slow times. And sometimes fans and sportsbooks catch the unexpected events or spectacles, such as the Aug. 27, 2017 “Money Fight” between Floyd Mayweather Jr. and Conor McGregor, which generated an estimated $65 million betting handle in Nevada. 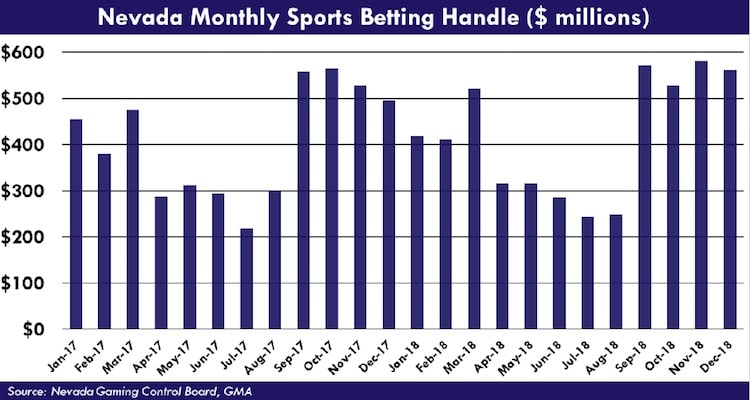 In Nevada, which uses an accrual system, June can be an interesting month, at least from a revenue reporting standpoint. Kornegay said that when the NBA and NHL champions are crowned, futures bets on those events are finally posted and often that means a bump in revenue.

“You have these slow days outside of the championships, and then you have a posting, so it could be a big posting in the handle, and most likely you’re going to post a pretty sizable win, but there is the occasional loss,” he said.

Since PASPA was overturned in May 2018, six states have launched legal sports betting. Mississippi was the third to do so, behind Delaware and New Jersey. Nine months in, despite often hearing that sports betting isn’t meeting projections, Mississippi Gaming Commission Executive Director Allen Godfrey disagrees.

“I have seen so many articles, it’s almost as though they are trying to paint it as a negative picture,” he said. “I don’t know how anybody ever projected how it would do, because the only benchmark out there is Nevada. I know in Nevada that sports betting was 2 percent of gross gaming revenue. Two percent of Mississippi GGR would be $40 mm (in tax revenue). Right now, we’re looking at almost $30 mm after nine months. We’ve got another three months to get $10 mm.”

Mississippi handle grew steadily from launch last August through December before a seasonal decline started in January. The state hit a high of $44.5 mm in handle in November, and in April, that number dipped to $19 mm. But Godfrey said that not only is he not worried about the state of sports betting in his state, but that the slowdown is, in some ways, welcome.

“It’s driving foot traffic, it’s driving non-gaming revenue,” he said. “From all indications, the operators are telling me that (new) foot traffic, isn’t from people that are slot players, it’s a different customer.

“What I think we’re going to find is that it probably is slower, and for the state of Mississippi, it’s an opportunity for those people who want to bring on some sort of (on-site) mobile offering to do that. It’s a good time for us to field trial before football season.”

Of course, Mississippi sportsbook operators stand to benefit tremendously from the availability of mobile sports betting statewide, which is not yet permitted under current regulations. In New Jersey, over 80 percent of betting handle is now coming via mobile devices and computers.

Godfrey isn’t the only one who embraces a slow period. From West Virginia to Nevada, sports betting’s slow season is a chance to reboot, rework and reinvent. McClintic says his company has plans to do work at its physical sportsbook in Charles Town, W.V. ahead of the football season, including adding new technology, new boards, kiosks and TVs, as well as upgrading seating. In Iowa, where sports betting was legalized in May, the company will use the slow months prep their sports betting site in Council Bluffs.

“It’s all designed to get us live or upgraded before the football season starts,” McClintic said.

Nevada sportsbooks, which have 40+ years of experience under their belts, know there’s a slow season, though that time period has gotten smaller and smaller over the years. In fact, during World Cup years, the slow season is really only a month or two long, according to the Superbook’s Kornegay. While soccer can drive a whole new fan into sportsbooks, Olympics, golf, tennis and other niche sports, well, not so much.

“I can’t say that we haven’t tried through the years, but we’ve just learned that there is just so much you can do,” Kornegay said. “You can probably run promotions during that time but you’d probably be on the short end of it. You can really only put so much lipstick on that. We really are dependent on the sports calendar.”

McClintic and Penn National have a bit of a different take. As a new player in the game, McClintic is thinking outside the box for ways to drive up revenue during the slow season.

Sports betting “has taken the country by storm,” McClintic said. “You used to be able to buy a scratch-off at the corner store, but now you can buy a parlay, and potentially win $1,000. You get a couple of hours of entertainment rather than a few seconds. It could ultimately be a boon for sports betting in the off months, where it becomes habitual, like a nice glass of wine with dinner, you could do it once in awhile. … It would be boon to hold, not handle.”

Online sportsbook operator FanDuel Sportsbook has multiple promotions set for the coming months, including what it calls “insurance.” For this promotion, fans have the opportunity to get a portion of their bet back in specific cases during the NBA and NHL playoffs and as part of a four-part parlay.

“Our approach is to focus on the events that do exist regardless of the time of year,” FanDuel’s Counsel for Policy and Government Affairs Cory Fox said. “As a business, you can’t just focus on football season, that’s not a good model. In the spring, there is March Madness, and there are a number of tent-pole golf events, the NBA Finals are going on. There are fewer events in the summer, so we have a number of promotions.”

Regardless of what works where, the bottom line is that sports betting follows a cycle, and while pundits or the media may try to make spring and summer handle or revenue declines a cause for concern, usually, they aren’t.

“New operators shouldn’t go into shock when handle declines in April or May,” Kornegay said. “It’s a very cyclical business. It will drop even more in July when you can’t even post the NBA or NHL championship. (New operators) should plan for that, and they should expect to see some low handle numbers, and it’s not because people are losing interest, just driven by the sports calendar.”