Coronavirus forcing operators to get creative and offer odds on Aussie Rules Football, rugby and more 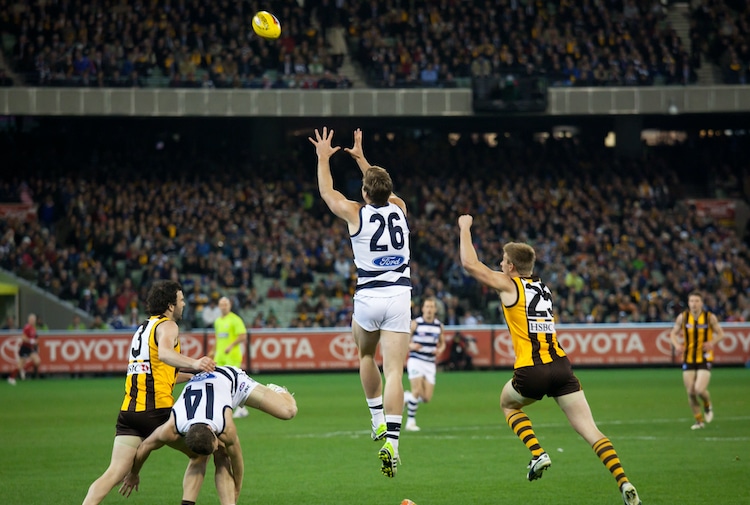 Tom Hawkins(C) leaps for a mark during Geelong's win over Hawthorn - September 9, 2011 in Melbourne, Australia.

Following the shutdown of American major league professional sports and college sports, as well as the temporary shuttering of physical sportsbooks across the U.S. and the world, legal sports betting is getting a new look. The COVID-19 pandemic is forcing us inside and away from large gatherings. The question for many sports fans currently self-quarantined and looking for a diversion has become: “What live events can I bet on, and where?” The answer is: Just about anything resembling a sport that is still being contested is available to bet on.

During a week that was slated to begin with Selection Sunday and end with four straight days of March Madness, sportsbooks will miss the biggest sporting event of their year and are scrambling to try to replace at least some of the lost revenue.

“Normally, we would be setting up the props (for March Madness), watching NIT games, and prepping for the crowds,” Jay Kornegay, vice president of Race & Sports Book Operations for the Westgate Superbook, told Sports Handle via e-mail Monday. “Instead, we’re tracking down third-tier soccer league schedules.” Some Nevada casinos are still open for business.

Several international basketball and soccer leagues continue to play – although some are doing so without fans – and sports betting operators are digging up things to bet on from Argentina to Kosovo to Serbia. Odds are being offered on things from MMA to rugby, with plans to add events like chess and snooker, as soon as regulators sign off.

Day 5 without sports: I am now betting on 3rd division footy in Argentina.

“Sports fans are expanding their horizons,” said Mattias Stetz, COO of Rush Street Interactive (PlaySugarHouse and BetRivers) via a press release late Monday. “They are betting on UFC, soccer, Turkish basketball and whatever sports are still being played. If there is a professional sporting event being played anywhere around the world, we are trying our best to offer it.”

According to Rush Street, last weekend’s UFC Fight Night, which was a non-title event, beat handle for the previous two pay-per-view events. In Las Vegas, the Westgate Superbook is offering multiple betting options online, and for those who visit the book, there is also a nearly full slate of horse racing available to wager on.

At PointsBet, which currently operates in New Jersey, Indiana and Iowa, it’s been a sprint to put together sports betting on Russian soccer, the KHL and darts, only to have all three come off the board. The company still has a healthy list of options, and to help bettors feel more comfortable, launched a “March Strangeness” campaign that offers promos and some insight into little-known sports.

“We realize these are not going to have mass appeal, so we are (still) going forward with futures for people’s favorite sports,” said Patrick Eichner, director of communications for PointsBet. “If people want to play, we are also offering a match for in-play bets. We have lots of promotions … it’s just us being creative and posting new things on the site to try to entice customers.”

Eichner said his company is also exploring political betting, and that “we’ve all been thrown some lemons, so let’s go ahead and make some lemonade.”

Day #8 without sports betting: I just put $100 on 200000:1 odds that the coronavirus wipes out all the 2020 presidential candidates and Walt Disney awakens from cryogenetic slumber to take his rightful place as, quite literally, the head of our nation

Besides available live events, most online sportsbooks are still taking futures bets on professional and college sports (the Patriots are moving down the board with the news that Tom Brady is leaving New England), and like PointsBet, there are lots of promotions out there, including DraftKings‘ “free-to-play” game that centered around last weekend’s Democratic presidential debate, and according to the company had “60,000 unique bets come through.” Like other companies, they’re offering odds boosts and other promotions.

And for those who want to bet the horses, bettors can do so on several apps, including TVG, TwinSpires or US Horseracing, as well as on FanDuel’s mobile sportsbook. Open physical sportsbooks are also continuing to offer betting on horse racing.

Here’s a look at what you can bet on and where. We don’t claim this list to be complete. It will be updated, and it will most certainly evolve in the coming weeks. In fact, as of this morning, the Russian Premier League (soccer), for which most operators were offering odds, came off the board, the KHL playoffs were pushed back and are being rejiggered after two teams withdrew.

* PointsBet is also waiting for regulatory approval in New Jersey to offer wagers on Turkish, British and Japan B1 basketball, table tennis, chess, snooker, and eSports.

Expect each and every book to add more sports (and quasi-sports) if and when possible. This pandemic is a real lesson in creativity.  This post will be updated if/when more markets become available — or taken off the board.