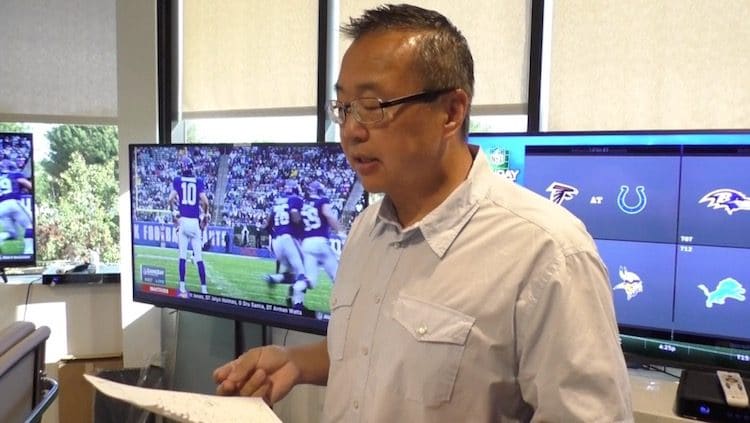 Dr. David Chao, or as he’s known on Twitter @ProFootballDoc, never expected that his passion for sports medicine and focus on film study as the former San Diego Chargers team doctor would spin him into a world analyzing video to help inform sports bettors.

After building a following of 150,000 and compiling a “record” of 95 percent accuracy in his video-based medical analyses of NFL player injuries, he’s turned a hobby into a small business — currently offering the content free — feeding a voracious audience of sports bettors and fantasy players.

“There’s no other doctor that’s crazy enough or passionate enough to want to be involved at this level,” Chao told Sports Handle, referencing his newly launched site Pro Football Doc. “And quite honestly right now, I’m most concerned about quality control of the information. It’s never 100 percent because it’s just video, and video can lie.”

If you’re here, you probably don’t need need the remainder of Chao’s backstory. Instead, our conversation focuses on timeless fundamentals for analyzing, weighing, and applying the kind of injury information that Pro Football Doc provides. These points, we hope, are worth considering today or in NFL Week 7 in 2021.

But first, a point of clarification: Chao emphasizes that he is not in the business of diagnosing injuries. “I don’t diagnose anything technically, because diagnosis would imply examining a patient, looking at an MRI and or having a doctor-patient relationship.” But that is not what he’s doing, “So technically, for clarity, I don’t ever diagnose anything,” he says.

Point 1: Judge the video, not the player’s reaction

Video can lie and so can the player’s snap reaction to the physical sensation of injury or anxiety it can trigger.

“Just because a guy slams his helmet doesn’t mean he’s done for the season,” Chao says. “He could just be pissed that it’s a tight game and he wanted to stay in, and maybe it’s only a one-week injury. A guy could be in tears because he’s worried that he re-tore his ACL, but we might find that he didn’t. That’s the emotion of it.

“Everything.” the player says.

‘Where did you injure it?’

“Is it your knee? Your ankle? Your thigh?”

Reactions can be misleading because sometimes the nature of the injury is not always obvious in the immediate aftermath.

Uh oh…Drew Brees injured as Aaron Donald hits what looks to be his thumb #Saints pic.twitter.com/SRgotf44MB

“But in terms of acute trauma, among the harder injuries are muscle injuries. It’s easier to say ‘he tore his quad tendon,’ it’s harder to say how bad his quad muscle strain is. Take hamstrings: Does a guy pull up lame because he feels tightness, and he didn’t want to go on to tearing his hamstring? Or does he pull up lame because he actually tore his hamstring significantly. Hard to say.”

Roethlisberger is out for the season with an elbow injury that required surgery, while Brees is out for at least six weeks after tearing a ligament in his thumb during a mid-September game against the Los Angeles Rams.

Point 3: Impact of cluster injuries can be mitigated by scheme

Remember during the preseason when NFL rosters get trimmed from 90-something down to 53? When there’s really just five spots up for grabs? Sure, some linemen — backups or starters — will have games where they resemble turnstiles, but generally they’re quite competent.

“Sometimes the back up left tackle is only a hair worse than the starter, and there may be no effect,”  Chao says. “But other times when that happens, you don’t account for scheme. Some coaches are better scheming in  terms of what goes on.”

In other words, Bill Belichick is going to be able to better manage the absence of a starter than former Patriots offensive coordinator and now Houston Texans head coach Bill O’Brien, who’s notoriously poor at making in-game adjustments.

“So you don’t have your left tackle, fine, you’ve got a backup there, you move your right tackle there,”  Chao explains. “But the left tackle used to be able to solo block the defensive end, and the right tackle always needed help with the tight end or running back on that side. Well guess what, that tight end or the running back is now going to the left side, and now what happens?”

“The starters are starters because they’re better players to some degree. They’re more likely to move their feet than dig in. And therefore they’re less likely to get rolled up upon the side and get more injured. Right? So there’s an example of injuries beget injuries.

“What happens when you move your right tackle to play left tackle, and then what happens to the backup at right tackle? There’s a downstream domino effect. Guys are playing out of position and more things happen. And guess what, how do non-starter defensive backs or wide receivers earn their roster spots? They have to play special teams, they’re just not sitting on the bench. So what’s the downstream on special teams? Fatigue.

“When he’s the No. 4 or No. 5 wide receiver, he can concentrate on being the best gunner he can, the best kickoff coverage guy he can, because he plays those 15 plays, and plays them like a bat out of hell. But when he’s playing 50 other plays, he’s got to worry about being a wide receiver. And when he covers the kickoff? A. he is now gassed because he just ran a lot; and B. where is the focus?”

Point 5: Injuries are just one piece of the handicapping puzzle

Obviously, Pro Football Doc focuses on injury assessments in pro football. But Chao and his team of web specialists and assistants recognize that injuries certainly aren’t everything.

“The nuance of being a good handicapper and someone who wins is incredible. You can’t just do it quantitatively, there has to be a large qualitative component to it. I’m not sending the message that — look at my website and you will win.

“But what it means, it has to be taken in account into the big picture, in terms of analytics and scheme, and match-ups and so forth. So injury is just one factor.”

Chao says to base an analysis solely on the injury situation is like a bettor saying, “No matter what, I’m always betting against a West Coast team playing an East Coast game. You’re not going to win that way, because No. 1, you can’t be that simplistic, and No. 2, the public knows that too, so it’s already accommodated in the line.”

The future for Pro Football Doc

Chao’s experience is rooted in nearly two decades on NFL sidelines (and the field of play when called into action), but he’s worked with NBA and MLB teams as well, he told Sports Handle. And the combined betting handle on basketball, college and pro, rivals football in the U.S.

So might Pro Football Doc branch out into other sports?

“If we can get the NFL down and we have the time and energy, then yes, we’d be happy to tackle NBA and soccer and hockey and other sports with trauma. Baseball is a little bit harder because most of the injuries are overuse. One can argue that what I provide might be more useful in baseball and basketball. But I want to do things well, and the answer is, it depends.

“If we’re able to dominate in the NFL sphere, I think there will be some demand for other sports, but right now, we’re eagle-focused on the NFL. It’s (expansion) on the radar screen, but we’re not committed to doing it yet.”