7 of the Biggest Potential Benefits of Legal, Regulated Sports Betting 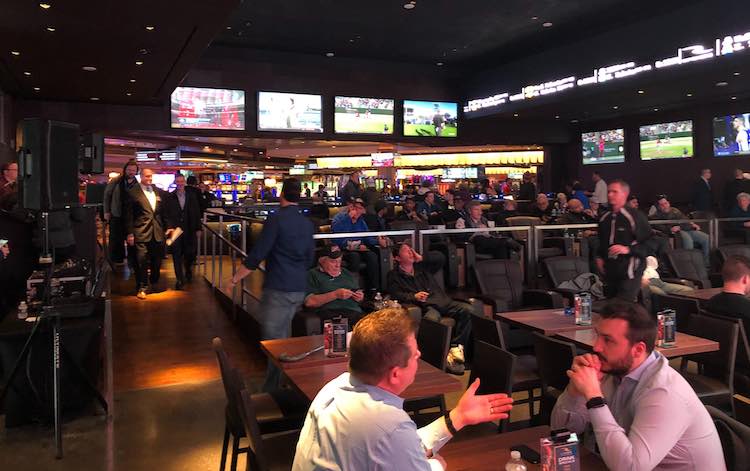 The now 40-year-old report by the Commission on the Review of the National Policy Toward Gambling highlights the pitfalls of enforcing anti-gambling laws:

“Contradictory gambling policies and lack of resources combine to make effective gambling law enforcement an impossible task under present conditions.’ Not ‘difficult’ not ‘frustrating’ not even ‘almost impossible’ but impossible. And why not? How can any law which prohibits what 80 percent of the people approve of be enforced?

“What should we do about this?” the Congress has asked this Commission. With a small, able, and very dedicated professional staff under the direction of a truly outstanding talent, seven citizens and eight experienced legislators have concluded that a joint venture is necessary between each of the 50 States and the national government, with some significant changes in the pattern of Federal laws.”

More recent anti-sports betting legislation, namely PASPA and UIGEA, are unclear, riddled with inconsistencies, and judges in the Third Circuit Court of appeals don’t even agree if the PASPA actually regulates sports betting, per its own terms.

Against that backdrop, we delve a bit deeper into the potential benefits of legal, regulated sports betting. 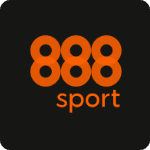 1. A safer market for sports bettors

From the 1940’s to 1960’s, the mafia ran numbers and took control of the sports betting market. Organized crime isn’t known for its customer service or propriety. These days, since PASPA and UIGEA has pushed U.S. sports books (outside of Nevada) to offshore entities, millions of U.S. citizens are engaged (with more difficulty) in a completely unregulated market subject to the rules of Curacao or Costa Rica and other nations. Some of these sports books are reputable but many are not, leaving little or no recourse for players in the U.S.

In a 2005 piece for the Bookings Institution in 2005, Melissa Schettini Kearney writes, “As the Internet provides the luxury of anonymity and privacy, Internet gambling might be more problematic – relative to traditional forms of gambling – in terms of attracting youth and problem gamblers.” She continues, “The unique features of Internet gambling also lead to a heightened potential for credit card or other fraud.”

UIGEA has exacerbated this problem. And then there’s local bookies taking action, producing transactions that may be shady or contentious. In a state-licensed or operated environment, sensible rules and regulations can ensure honest, secure and safe transactions.

In a 1999 report by the Public Sector Gaming Study Commission (PSGSC), the Commission explained of the problem of the gambling shadow economy:

States also have no means of regulating Internet gaming sites, particularly if the gambling company resides outside of the United States. This means that states cannot ensure the fairness of the games, conduct background checks on company employees, or audit the financial records of the company. In short, states cannot protect the interests of their consumers.

2. Legal sports betting would generate a ton of tax revenue

Meanwhile, Americans illegally wager roughly $148 to $500 billion on sports. Taking either estimate, if state governments taxed roughly 2.5% of the sportsbooks’ holds, that’s a lot of annual tax revenue flowing into U.S. states — instead of not existing at all. That can close a lot of budget deficits and support scores of schools, health clinics, bridges, tunnels and so on.

3. It would create a lot of jobs and have broader, beneficial economic impact

State-licensed sports books will generate more job opportunities at existing casinos themselves (oddsmakers, analysts, security, cashiers, etc.), and perhaps at new standalone sports betting entities — depending how a state decides (or not) to implement its regulated environment.

An ancillary effect would be increased traffic into the casinos, bringing in more revenue for restaurants, retail shops and other businesses that support casinos.

4. A regulated environment will better protect the integrity of the games

Take it straight from a commissioner of a major sports league — the NBA’s Adam Silver. He wrote in a New York Times op-ed in 2014:

Outside of the United States, sports betting and other forms of gambling are popular, widely legal and subject to regulation. In England, for example, a sports bet can be placed on a smartphone, at a stadium kiosk or even using a television remote control.

In light of these domestic and global trends, the laws on sports betting should be changed. Congress should adopt a federal framework that allows states to authorize betting on professional sports, subject to strict regulatory requirements and technological safeguards.

These requirements would include: mandatory monitoring and reporting of unusual betting-line movements; a licensing protocol to ensure betting operators are legitimate; minimum-age verification measures; geo-blocking technology to ensure betting is available only where it is legal; mechanisms to identify and exclude people with gambling problems; and education about responsible gaming.

Such requirements and mechanisms have proved effective in other markets, such as in Australia. Stephen F. Ross and Adrian Anderson expounded on that in a 2015 article titled “Strong Regulation Could Inject Integrity into Sports Gambling”:

The Victorian regulatory regime contains a number of features critical to ensuring that sports gambling is channeled in appropriate ways and that threats to sporting integrity can be promptly identified. Most important are special regulations allowing for information-sharing, even in situations where ordinarily these matters are legally confidential, among bookmakers, law enforcement, and sports leagues.

Access to the betting records is crucial, because the money trail is the most reliable way of tracking down match-fixing and abuse of inside information. It also enables sports leagues to conduct betting checks to ensure participants in the sport are not engaged in wagering themselves. The majority of successful prosecutions for match-fixing around the world have resulted from access to this information.

Right now, none of these things exist in the illegal betting market. The major professional leagues and the NCAA have no mechanisms to detect unusual activity, and there exists no information sharing that would be useful to the leagues.

5. A regulated environment will better detect problem gaming, and direct people to help

You think offshore books or local bookies offer help to people engaged in problem gambling, or decline to take bets from them? Right. The 1999 PSGSC report states, “Some Internet gambling sites have no betting or loss limits. There is no means of enforcing such limits, as providers are beyond the jurisdictional reach of the states.”

This would be different in a state-sanctioned, regulated environment that has an interest in protecting its citizens. Operators could impose betting limits and perhaps screen people for problem gaming.  Public service messages could offer help to people suffering from gambling addiction.  And any online extension of state-operated sports books could include pop-ups directing people to resources to get help.

After a failed attempt by Delaware to legalize single-game wagering in the state, then-governor Jack Markell wrote in a 2009 letter to Roger Goodell:

[T]he NFL negotiates contracts with all of the principal broadcast networks and those contracts generate billions of dollars in revenues for the NFL and the team owners. Importantly, each of these companies owns and operates websites that provide the betting lines which are viewed by bettors in every state in the nation, regardless of whether the viewers in that State can legally wager on the games . . . . In short, the notion that the NFL has aggressively and actively fought against betting on its games is belied by the very programming the NFL indirectly endorses and from which it handsomely profits.”

Long before that in the 1976 report by the Commission on the Review of the National Policy Toward Gambling, the authors similarly noted:

“The fears expressed by the various commissioners of professional sports regarding the increased potential for fixes, player betting, and change in the integrity of the sporting events in the event of legalized sports betting are exaggerated in view of the extensive amount of illegal wagering already taking place today on professional team sports.”

And now there’s an NHL and NFL team located (or soon-to-be located for the Raiders) in Las Vegas. From CBS’ Jimmy the Greek to ESPN’s “Chalk” vertical (a very well-done section), to pro sports team owners embracing and actually making financial investments in daily fantasy sports entities (which exist thanks to a UIGEA loophole), the level of hypocrisy is intense.

ESPN has paid billions of dollars for rights to MLB, NFL and other professional sports leagues rights. Here is a screenshot (taken August 7, 2017) from ESPN.com’s “Pick Center” for a soon-to-be played MLB game: 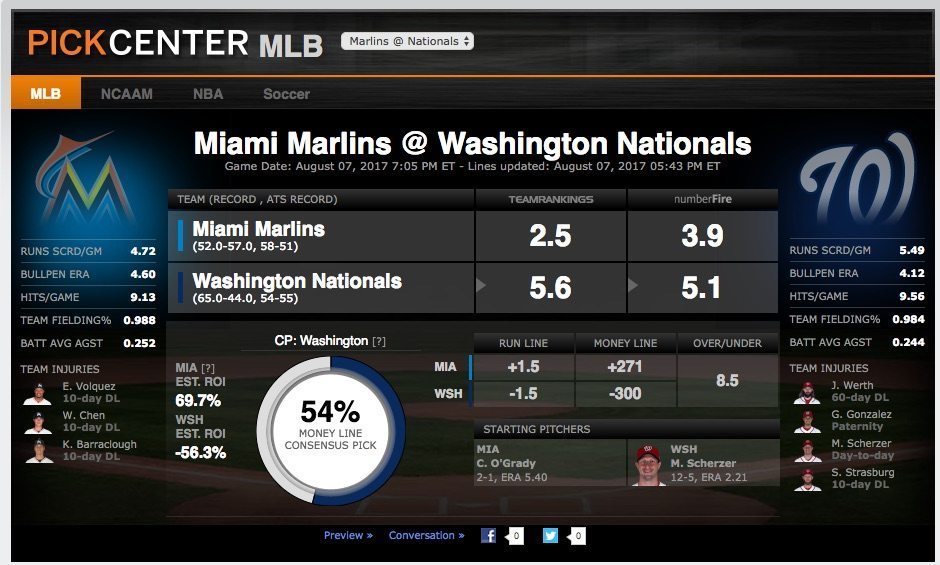 This represents a pretty clear acceptance and promotion of sports betting on its contests, yet the leagues continue to battle states’ attempts at legalizing sports betting in the courts, citing the “integrity of the game.” Try to reconcile that with what appears on your screen, and in thousands of other pages on ESPN, CBS and NBC’s websites.

The leagues quietly approve of sports betting because it increases interest and engagement in every game. Millions of people will tune in for a 17-10 Jaguars vs. Browns Thursday Night “color rush” slopfest.  Most of them are watching because they have money riding on the game, not because they enjoy watching Blake Bortles.

Millions of people in the U.S. want a safe, secure way to place wagers on sports games, as people do in Europe, Australia and elsewhere around the world. It will benefit the leagues that farcically oppose it, and the fans, and the states, and every other person and entity mentioned in this article. Until that time… check our betting legislation tracker to see where each state currently stands on sports betting.