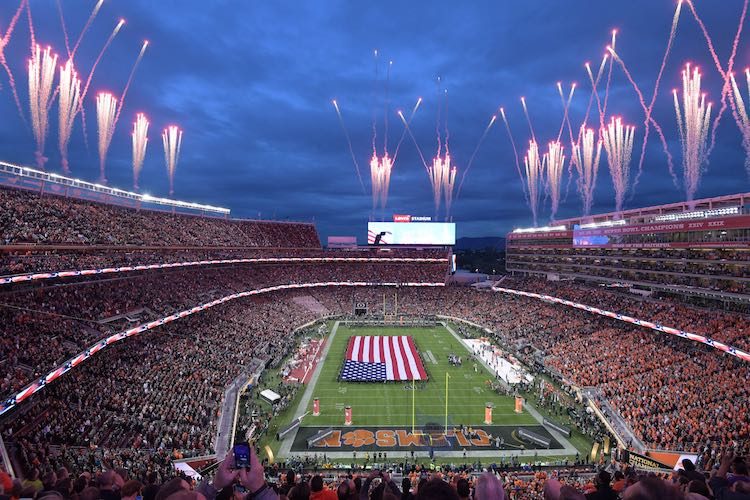 When sports betting went live in Mississippi last summer, it was a no brainer to allow bettors to wager on Mississippi and Mississippi State football games. After all, there are no professional sports teams in the state, and SEC sports are a second religion in the deep South.

“Tell me that people are not already betting on these games all over the place, anyway,” Allen Godfrey, executive director of the Mississippi Gaming Commission, quipped to Sports Handle at the time.

But Mississippi is one of only three states with active legal sports betting that allow bets on their local college teams. Nevada and Pennsylvania are the other two.

In June, when the D.C. Lottery rolled out its rules for sports betting, it “carved out” local college teams, making it illegal, for example, to bet on Georgetown basketball. Also in June, when the Illinois general assembly voted to legalize sports betting, it ultimately chose to carve out Illinois-based teams, which means fans cannot bet on Northwestern football or Loyola basketball.

Reasons not to allow betting on college sports

In both Iowa and Indiana, which legalized sports betting within days of each other in May, fans can bet on any college team they want, but like in Mississippi, they can’t make prop bets.

Athletic directors from Pennsylvania to Illinois have argued that bettors should be prohibited from betting on local teams to help protect the integrity of the games, and the athletes themselves. A common claim, and one made by Illinois State Athletic Director Larry Lyons during sports betting hearings, and Penn State President Eric J. Barron in response to the Pennsylvania Gaming Control Board’s temporary regulations last year,  is that college athletes aren’t protected, or insulated enough from potential negative influences.

“We are concerned that implementation is likely to have a negative effect on the integrity of college athletics and on the health, safety and welfare of Pitt’s students. Students may be more inclined to participate in gambling activities, possibly to their detriment,” Barron wrote in June of 2018.

A college athletic director in West Virginia – one of the first states to legalize sports gambling – is nervous about the impact sports betting could have on college sports. https://t.co/VhI60habUK pic.twitter.com/MndoopeWyy

Student athletes, athletic directors claim, eat, sleep, study and socialize with the general student population and therefore are easily accessible and could be swayed into taking game-altering bribes. At the same Illinois hearing, another athletic director pointed out that there is still contact between athletes and other students, even when games are played out of state. Ultimately, lawmakers prohibited betting on any college event in Illinois or Illinois team regardless of where it is playing.

It’s all about politics

“It was way more of a political decision than anything,” said Illinois primary sports betting bill sponsor Mike Zalewski (D-District 23). “We thought that if we didn’t make the athletic directors happy, we were afraid that lawmakers from those towns would oppose the (sports betting) bill.”

Illinois sportsbooks also won’t lose much by prohibiting betting on local teams. Though the state is often represented in March Madness (Loyola got the Final Four as recently as 2018) and Northwestern’s football team has long since broken through its futile years and gone on to win three Big Ten titles in the last 25 years, the popularity of, and commitment to, local college teams in Illinois can’t touch what it’s like in Mississippi or even Pennsylvania.

From Ole Miss to the MSU Bulldogs in the Magnolia State or from Penn State football to Villanova basketball in Pennsylvania, the impact of prohibiting betting on local college teams is significantly steeper.

“Other than the Saints being close to us, there is nothing,” said Mississippi’s Godfrey. “It’s college, period. Since we don’t have a lot of pro teams, that’s what we live for, the SEC. It wouldn’t surprise me if in Florida, that college football games do better than the NFL.”

Sports betting isn’t legal in Florida, so that comparison is currently unavailable, but in Mississippi, bets on college sports accounted for up to 64 percent of all bets placed through the first three months of the year. During that time, Mississippi, Mississippi State, LSU and Auburn all competed in March Madness, with LSU advancing to the Sweet 16 and Auburn getting to the Final Four. As the only state in the deep South with active legal sports betting, Mississippi certainly benefitted from LSU’s and Auburn’s runs, in addition to their hometown teams.

According to statistics that Godfrey collected from Mississippi sportsbooks, bets on college teams accounted for 43 percent of all bets placed in January, 53 percent in February, 64 percent in March, 11 percent in April and just less than one percent in May, when there are, essentially, no college sports to bet on. Similar numbers were not available for Pennsylvania, but at the very least, the numbers bear out that Mississippi would have given up plenty had it prohibited betting on local sports teams.

“College sports is very big in the South, and that is supported by those numbers,” Godfrey said. “If (a carve out) was the law here, I wouldn’t argue, but I think we’d be missing a lot of revenue here. I just don’t think there is a one size fits all here.”

1) Allowing college sports bets won’t create a tidal wave of nefarious activity. In actuality it will cast a light on corruption or prevent it.

2) Not offering mobile is an epic financial blunder.

Even Zalewski admitted that if Notre Dame, which is in neighboring Indiana, called Illinois home, things may have played out differently.

“One hundred percent different,” Zalewski said. “But as much as we don’t have a high Q-rating university in terms of athletic prowess, the universities do have a lot of political pull in this state.”

From a stakeholder standpoint, banning betting on college sports is leaving money on the table and more importantly, leaving the door open for the black market to continue to thrive. In nearly every state that has considered legalizing sports betting, a key part of the conversation is keeping gambling money in state rather than letting it continue to flow offshore or into the pockets of local, illegal bookmakers.

“It’s wildly popular to bet on college sports,” said then-American Gaming Association Vice President of Public Affairs Sara Slane. “If you are an Illinois sports fan, and you want to bet on Northwestern, and you download ‘name-your-app,’ and Northwestern wasn’t there, what would you do? The options are to drive over the state line or go to the black market.”

.@AmerGamingAssn responds to NCAA President Mark Emmert raising concerns of the potential impact of sports betting on college sports. His comments were made at last week's NCAA annual convention in Orlando.

AGA response is via @SaraSlaneAGA, SVP of Public Affairs. pic.twitter.com/I4gAwLD2XY

In his impassioned effort to bring sports betting legalized to Louisiana, Martiny repeatedly pointed to the fact that Louisianans take their entertainment dollars and spend them in casinos, and now sportsbooks, in Mississippi.

“It’s happening, it will continue to happen,” Martiny said of Louisianans going out of state to place sports bets. “Those same people that go over to Mississippi and go to Arkansas and blow their paychecks, they come back to Louisiana and fight with their spouses and significant others, and they get arrested. It’s here.”

Operators obviously want to maximize whatever market they are in, and lawmakers claim to want to drive as much revenue from sports betting as possible to their respective states. Whatever the amount of tax revenue, banning betting on a particular sport or team or level means there’s still money flowing out of a state, and that the black market, whether that is a corner bookie or an online app, still has a foothold.

“It’s hypocritical of a state to legalize sports betting and then say you can’t bet on college sports,” Slane said. “I think it creates less transparency.”

Said Brendan Bussmann of Global Market Advisors: “What are we doing about the college bookie? College and offshore bookies continue to win wagering on college athletics because while those are being taken off the table by legitimate operators, (illegal books) are still operating.”