Legal precedent not on their side 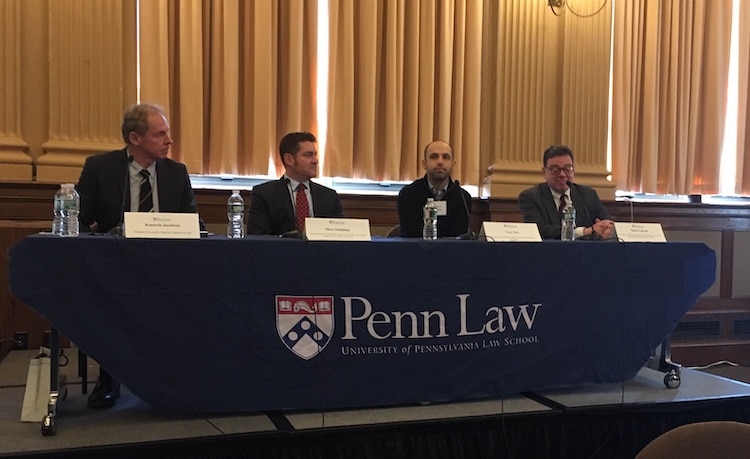 Professional sports leagues have spent the past 18 months lobbying state legislators all over the U.S. to mandate compensation from sports betting operators for the use of statistics generated from their games.

After striking out in numerous jurisdictions, the leagues have rallied – with Tennessee, Michigan, and Illinois all creating sports betting laws with the leagues guaranteed a piece of the pie.

Why can’t the leagues elect to just sue a sports betting operator who utilizes those statistics, rather than seeking mandatory “integrity fees,” “royalties,” or “official league data” fees?

At the annual Penn Law Sports and Entertainment Symposium in Philadelphia on Friday, a pair of university professors explained to a few dozen students that the current strategy makes sense because the courts historically have not been kind to such arguments.

In the mid-1990s, Motorola began paying employees to watch sporting events on television or listen to them on the radio and record statistics for a service which could be obtained by subscribers to their SportsTrax pager service (many of whom were gamblers, Edelman noted).

The NBA sued Motorola in 1996 for federal copyright infringement of their product, and won at the federal court level in Manhattan.

Second round in court goes against leagues

But the following year,  the Second Circuit Court of Appeals rejected that copyright protection claim for the statistics, ruling that only the league’s broadcasts were protected.

“What ‘authorship’ there is in a sports event….. must be open to copying by competitors if fans are to be attracted,” the three-judge panel concluded. “If the inventor of the T-formation in football had been able to copyright it, the sport might have come to an end instead of prospering.

“Even where athletic preparation most resembles authorship – figure skating, gymnastics, and, some would uncharitably say, professional wrestling – a performer who conceives and executes a particularly graceful and difficult — or, in the case of wrestling, seemingly painful — acrobatic feat cannot copyright it without impairing the underlying competition in the future. A claim of being the only athlete to perform a feat doesn’t mean much if no one else is allowed to try.”

The second case was from 2007 and known as “Major League Baseball Advanced Media v. C.B.C. Distribution and Marketing.”

In that case, an 8th Circuit Court of Appeals panel upheld a lower court ruling that CBC could continue to provide statistics for its fantasy baseball service.

“As in Motorola, the court found that even to the extent that there is an intellectual property right, or right of publicity in player names and likenesses, those rights are trumped by the First Amendment,” Edelman said.

“So having failed twice to gain control of their data, this is a third attempt by the leagues to do so,” Edelman said. “And even if it doesn’t exist as a right in traditional common law, or statutory intellectual property law, states like Illinois and Michigan and Tennessee have granted it to them anyway.”

“The problem with the decision was that the federal appeals court’s ruling was only eight or nine pages long and really didn’t elucidate a good balancing test,” Conrad said of the weight to be given to intellectual property rights vs. First Amendment rights.

Conrad added that the only publicity rights case that the Supreme Court has ever decided was more than 40 years old and “way out of date.”

In the CBC case, Conrad said that a dissenting judge raised a worthwhile point in objecting to the fact that the MLB Players Association had a licensing agreement in place with MLB Advanced Media, which was ignored in the majority’s  ruling.

“All of these cases are extremely difficult,” Conrad said, citing Daniels v FanDuel, Inc. — which was decided in 2018 – as another example.

In that case, both FanDuel and DraftKings — the two daily fantasy sports giants — were sued by former college athletes Akeem Daniels, Cameron Stingily, and Nicholas Stoner over the use of their statistics in their DFS games without their consent.

The Indiana Supreme Court ruled that the players’ “right of publicity” was not violated by either operator because the athletic performances were “newsworthy.”

“A problem here is that these are often state-by-state laws – the right of publicity is not federalized like copyright or trademark law,” Conrad said. “I’ve never been a right of publicity fan — I’m more of a First Amendment fan – but I found the Daniels case troubling enough to say that maybe there’s something there.”

Both Conrad and Edelman noted that college athletes as the plaintiffs in a case would likely get far more deference than professional athletes. Edelman said that in several cases, the latter have lost on right of publicity claims in part due to judges pointing in their rulings to the amount of wealth those plaintiffs have. Conrad called that line of reasoning “absurd.”

Cory Fox, counsel for policy and government affairs for DFS giant FanDuel, said that the defendants were chosen deliberately.

“That case came when there was a lot of controversy going on over daily fantasy sports,” Fox told the Penn Law audience. “They could have sued ESPN or CBS or another season-long fantasy service, but they chose FanDuel and DraftKings hoping that unsympathetic defendants make it more likely to get a better ruling on the right of publicity issue.”

All three panelists agreed that it might be wise legally to separate use of player names and statistics from other aspects.

“We are careful of how we use player images and likenesses, because we don’t want to create the impression that those athletes are endorsing our products,” Fox said.